I develop products that are sold all over the world. The line voltage may be one of (100, 120, 220, 240). I am currently considering options for handling this requirement. We typically have a 5V rail that needs a couple amps, and 15V rails that need under an amp. Perhaps another tap with a higher voltage.

I am not asking for a decision from the above options, but rather wondering if there are any other options to put on the list. What do you guys do?

You really have the only two answers there are: Linear or SMPS. There are some things you can consider though to make you designs more robust regardless of which you choose.

Linear: Designing a Transformer that can take each of those input voltages and output the correct secondary would not be too difficult. You can double wind the input transformer and have it select between 100-120Vrms and 220-240Vrms. Then with the linear regulators you simply allow them to regulate when the lowest rms voltage is present and burn more power then the highest rms voltage is present. 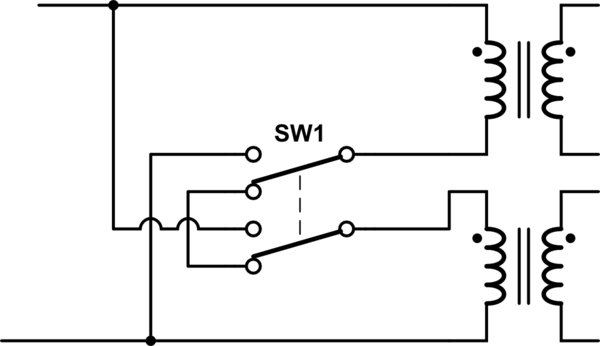 SMPS: These are much harder to design. There are more regulations regarding their standards internationally. They are lighter weight. If you're worried about sensitive electronics, Use a constant switching frequency and then make a notch filter on the output specifically targeting that frequency.

Once I was involved with a very similar problem - a power supply for biasing a sensitive radio circuit, where a switching PSU was out of the question.

We used a linear power supply and then attempted to offer automatic 110/220 switching. The mains input would initially be connected to the 220 V primary, but if the DC voltage was low, it would then select the 110 V primary with a relay. This worked well.

One problem I had was that after disconnecting a 220 V mains supply, there was a short time while the smoothing caps discharged, during which the relay would pull in to the 110 V position. If the supply was reconnected during this time, it went straight to the 110 V primary and blew the fuse. This happened surprisingly often...

The microcontroller making the decisions, and the relay(s) would need to be powered from a linear regulator with tons of headroom, so they run at half-voltage until the correct decision is made. Your loads might need to be inhibited until the supply was stable.

Im sure regulatory approval of the power supply would be more difficult too.