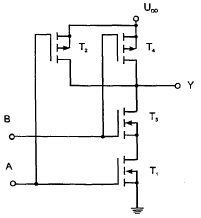 I took some measurements of volteges U(output) vs. U(input). Using two independent voltage sources (constant high level Udd and Uin varying in 0-to-Udd range), I considered three different connection possibilities so to investigate all four input configurations. Those were: 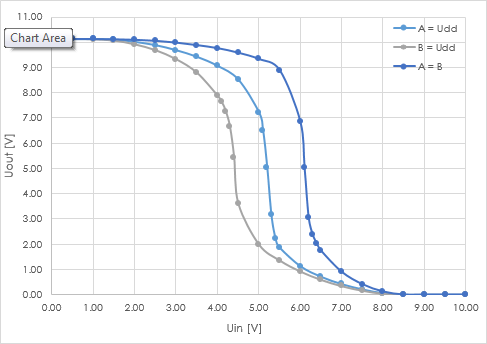 As long as a difference between case c) and other cases I could have expected, I was surprised to see a) and b) differ as well. Could someone please explain to me why would changing voltages connection between A and B significantly changes threshold voltage of the gate? Is it a widely observed effect or have I just picked a defective NAND?

It's a normal effect.

in a), T1 is 'on', and you sweep the gate of T2. At say the midpoint of the sweep, T2 is partially on (say 5 V on the gate), and some current is flowing through it and T1. T1 being on doesn't mean it has zero resistance, and so T2's source is not at 0 V. Therefore its gate-source voltage is not the same as Uin.

conversely, in b), T2 is 'on', and you sweep T1. Now, the Uin value is equal to T1's gate-source voltage, and so, for a given Uin value, T1 in configuration b will be more 'on' than T2 would be in configuration a.

Now, When T1 is partially on, it has the fully on T2 in its drain connection. However, when you look at the general characteristics of FETs, you'll see that the drain current saturates when the drain voltage gets to a certain level -- basically meaning that further changes in drain voltage (e.g. from a R in series with the drain) have no effect. What this means is that T2's impact on T1 is smaller than T1's impact on T2, and this is what gives the asymmetry in the curves.

Geerally, this also means that the speed of NAND gate is different for the A and B inputs.

If you needed a perfectly symmetrical characteristic, you could add another copy of T1 & T2, but interchanged and still connected between Y and GND.

Not the answer you're looking for? Browse other questions tagged voltage cmos nand or ask your own question.

0
Which input of NAND is preferred and why?

4
Do I need to duplicate the 4th "substrate" connection when building CMOS gates out of discrete transistors?
1
Voltage on circuit input different than on power supply
0
Current and Voltage in CMOS Logic Gate
0
CMOS NAND Image
0
Low voltage form a NAND logic gate then the state is high
4
More Fun with the CD4093 IC as Schmitt Trigger Oscillator. Any practical difference between circuit version with "Enable" pin and Without?
0
Cmos vtc characteristics
0
Problem with NAND gate in proteus
0
General CMOS circuit
0
Combining CMOS and TTL with drivers and Leds with relay driver