Could a 220 V wire shock me if I hold a 4 band Orange Red Orange Violet resistor in series?

A noob level question and I am afraid of electric current since childhood shock.

So a wire goes into wall socket, 200v input. If I hold a resistor of 32 Kilo-Ohm and touch wire with it's other hand and at another place with my other hand, something like:

What about parallel? (I do not know concept here.) 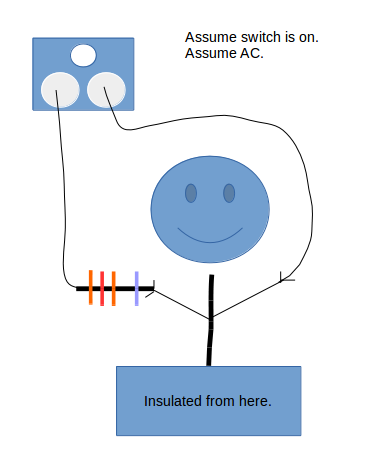 Guys, I am afraid of electric current. I have now started to look at electrical and electronics concepts to get over this fear. Relax, all I am trying to do is to find definitive answers which books do not provide (and not electrocute myself or someone else). 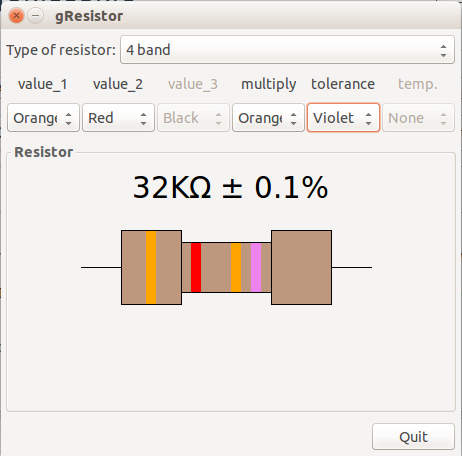 I will read up on what you guys have mentioned in the answers and get back with on topic but better questions.

Problem I find with books is that they tell how to calculate and what to calculate, but do not relate to real life scenarios.

Anyone that has to describe a resistor by reciting its color bands definitely shouldn't be sticking it into a wall outlet, especially when holding on to the other end. Put another way, if you have to ask, the answer is NO, don't do that.

Just for interest, each color is just a digit. ORN RED ORN VIO is the same as writing 3 2 3 7. However, that doesn't mean 3237 Ohms. Usually such things are written using a floating point scheme, so that might mean something like 232 x 107, but that's a rather unlikely value. Four bands would usually end in gold, meaning 5%. 1% resistors have 5 bands, so it's not clear what you actually have.

Perhaps the first orange is really gold, so the colors are actually VIO ORN RED GOL, which would be 73 x 102, 5 %, another unlikely value.

Again, don't stick it in a wall outlet.

Now that you've provided a diagram, it's clear that this is even a worse idea than it might have been. Not only are you directly connecting yourself to the power line, but you are doing it between the arms, which means the current will flow close to your heart. Unless you're going for a Darwin Award, this is a really dumb idea.

Let me make it really clear for people with your level of understanding:

Don't poke anything into a electrical output other than a commercially made plug for that purpose. Ever. No exceptions.

Yes I think you could get shocked or even die. Please don't try this :)

Short version: you clearly don't have the experiance to be designing circuits involving mains, let alone circuits that involve both mains and the human body. Messing around like this could get you killed.

orange-red-orange-violet seems an unlikely code. If we interpret it as digit, digit, multiplier, tolerance then we get 32K but with 0.1% tolerance. It seems unlikely to me that a 0.1% resistor would use a coding scheme with only two significant digits and while 32K is a standard value it's only in E192, again I find it unlikely that an E192 resistor would use a code with only two significant digits. Other possible readings of the code don't seem to lead to anything sensible for me either. Colour codes are easy to misread, if in doubt measure.

Anyway lets say you actually do have a 32K ohm resistor. That's about 7ma into a short circuit load, a bit less (but same order of magnitude) into a good connection to the human body. This is definately enough to give you a shock and quite possiblly enough to kill in the right circumstances. Then there is the risk of failure, cheap resistors are often not designed for mains and also not designed for the power levels that will end up being dissipated in the resistor (1.5W if driving into a short, a bit less if driving into the human body).

Not the answer you're looking for? Browse other questions tagged current resistors resistance shock or ask your own question.

12
6 LEDs in parallel with a single resistor to simplify soldering
1
How does wiring resistors in series and parallel affect their errors?
0
Calculate resistor for red Led in series
1
Make two Arduinos communicate with electrical signals
4
Understanding current, voltage and resistance
14
LED forward voltage is a range, so how do you calculate resistor value?
3
power supply remote sense protection resistor value?
2
5 band resistor. Red, orange, black, gold and black. It doesn't fit in to normal rules
0
A 4(5)-band resistor with an extra black band
0
Confirmation on Diode in parallel with a Resistor