I'm looking for a digital circuit whose behavior I will describe in a moment. It has one digital input (5V logic) and two digital outputs (12V logic). I'll hereby refer to these levels as 0 and 1, but keeping in mind the voltage difference between input and output. This circuit has to be as cheap as possible, with simplicity the second priority.

Upon a rising edge on the input, the first output should immediately go to 0, while the value of the second output is irrelevant (don't care).

Upon a falling edge on the input, both outputs should immediately go to 1. After an interval of time (around 200 ms, up to 50% tolerance on the timing is still acceptable), the second output should go to 0.

I built a circuit for this that would work if the input was 12 V, but other considerations forced the voltage level on the input to 5 V. I already felt my solution was getting complicated for a 12 V input, and just piling on a level shifter from 5 to 12 V would further complicate this circuit, so I'm trying to start from scratch and think of a simpler solution.

I think posting my circuit here would be counterproductive, as the natural reaction would be trying to refine it, and I think a good solution demands some outside the box thinking, but I will edit the post to include the circuit if requested by anyone.

Edit: by request, here is the circuit: 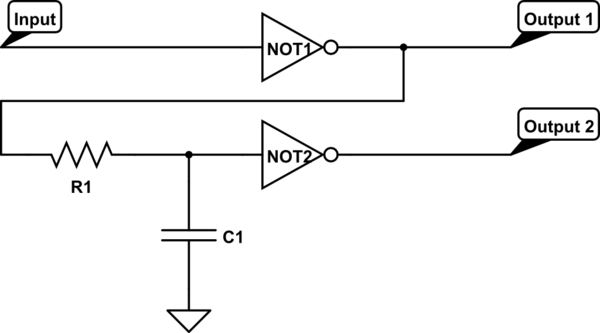 The NOT gates are Schmitt triggers (HCF40106 in my circuit), which is why the circuit doesn't work properly with a 5V input: 5V is not recognized as a high level signal when the Schmitt triggers are supplied with 12V.

To fix the 5V issue, I thought of passing the input through the following circuit, but as stated above, I believe this is getting more complicated than necessary: 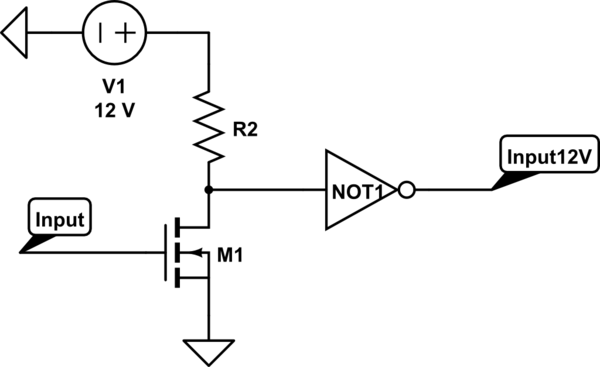 I've shown an LT1017 for convenience, but a cheap LM393 would work just as well, as would a cheap opamp, in which case you could eliminate the 10k pullups.

Also, both outputs swing between 12 volts and ground, but I've manipulated the plot for clarity.

The LTspice circuit list follows, just in case you want to play with the circuit. 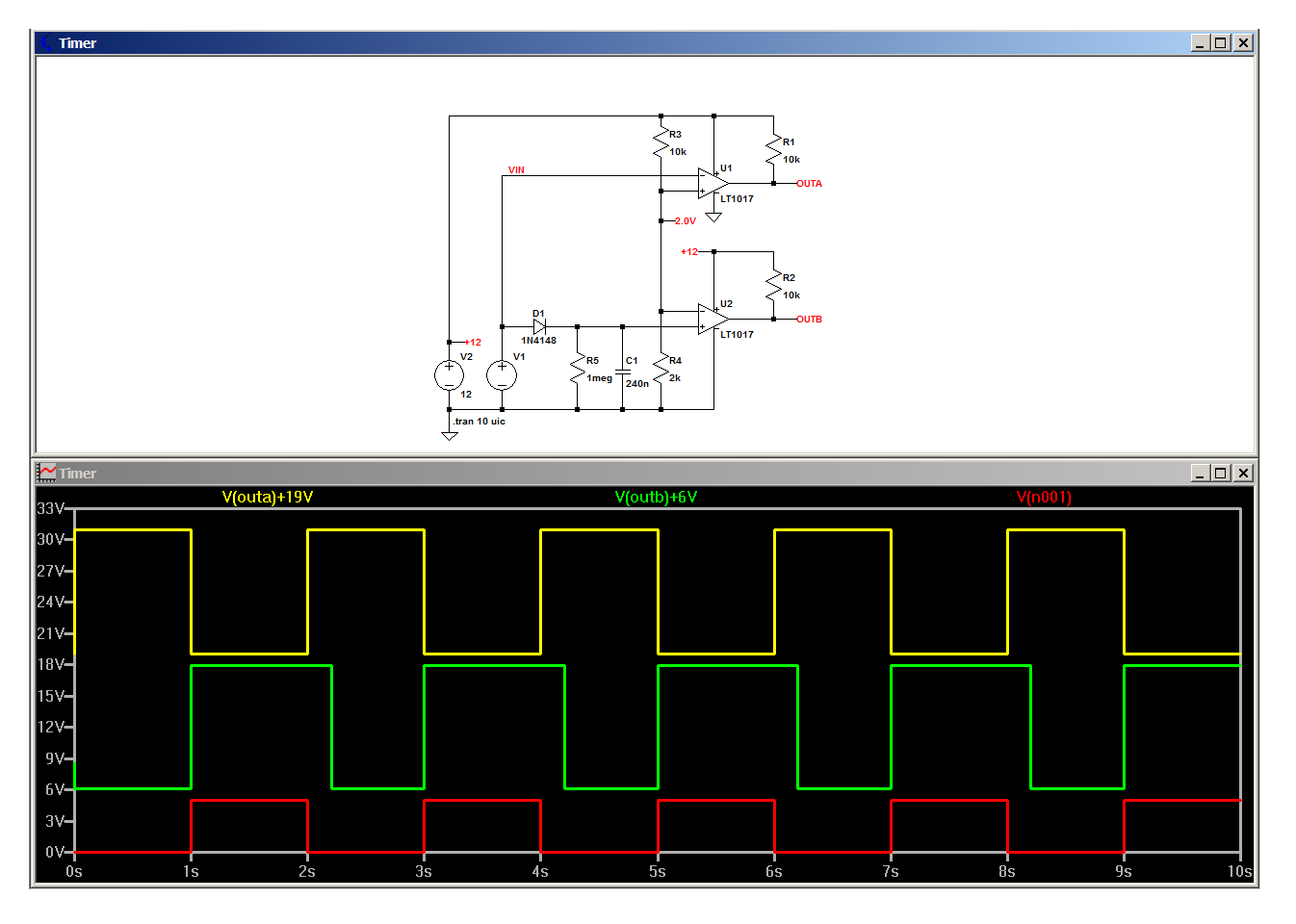 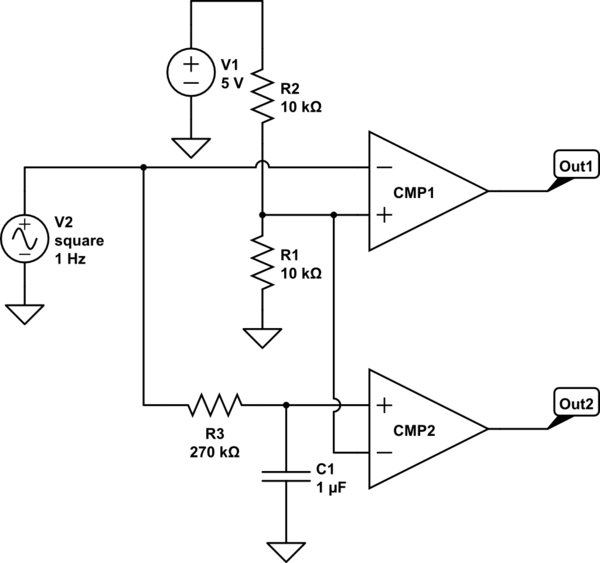 Here are some simulation plots (input on the first one, outputs on the second one):

The only issue is that when the input is pulsed twice in a short time (less than 1 second or so), the capacitor will be caught up halfway through charging or discharging, which will affect the pulse timing. Since you don't need absolute precision this may be acceptable.

Your logic is crying out for a microcontroller. Fortunately, micros with 2 inputs and 2 outputs that can perform the logic you describe are cheap and small. Even the tiny PIC 10F200 can do this. No kludgy and bulky analog electronics are required, just the PIC and its bypass cap. It has a internal oscillator good to a few percent, which is well within your accuracy spec, and better than external resistors and caps on a 666 555 timer and the like would give you.

You will need something to convert the 5 V output from the micro to the 12 V you need. This could be as simple as a single "logic level" FET for each signal, like the IRLML2502. That would actively drive low and require a passive pullup. I'll leave it at that since you haven't specified what the source/sink capabilities and speed of the outputs need to be.

Not the answer you're looking for? Browse other questions tagged timer level-translation or ask your own question.

0
Level translation and multiplexer
3
how to increase the voltage of a digital signal?
0
Level shifting 8 output IO Expander from 0V-5V to -2.3V to +2.3V
1
Can there be a zero power timer?
1
5V to 3.3V Level shifting circuit
0
Fast voltage translation from 3.3v to 5.7v
1
How can I build a versatile high voltage translator with an output in the negative and positive range?
0
Timer Protection Circuit
0
Delayed ON level on pulse