What if there are an odd number of twists in a twisted pair cable?

I am not an electrician, or a student of the field. I am a Network Engineer with a curiosity bug and that has recently taken me to exploring cabling and Twisted Pair specifically. I say this to plead that the answers be 'dumbed down' so that I can understand it ^_^.

I also just finally understood why the wires are twisted within the pair. Effectively, to allow ambient sources of Electromagnetic Interference (EMI) to affect both wire pairs equally, rather than one disproportionately to the other.

What lead me to understand it was this image, posted on ResearchGate.net on this Post by Dr. Ismat Aldmour: 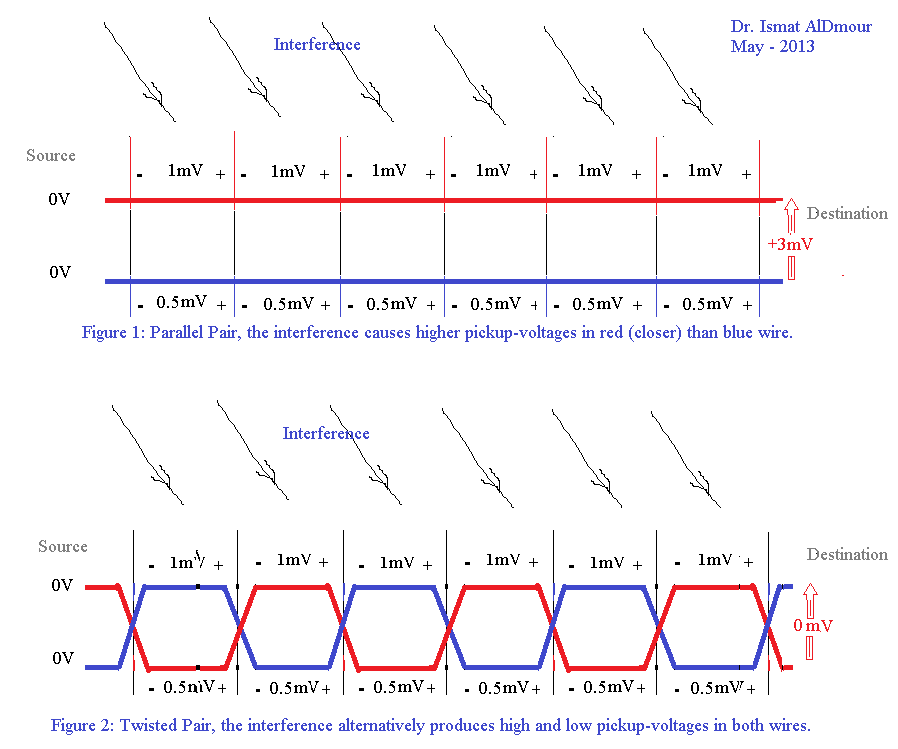 I'll post his explination here as well, to avoid the risk of link rot:

I had to explain this to my students in networking once by drawing something similar to the attached Figure. In Figure 1, for the case of parallel pair, the interference causes the red wire (the closer to interference source) more pick-up voltage (induced) per unit length (1 mV as example) while less induced (0,5mV) in the blue wire. Total difference at the destination is 3mV. While in the twisted pair case (Figure 2), total difference is 0V at destination because parts (twists) of red and blue wires alternatively subjected to same level of interference and thereby total difference at destination is 0V. I drew this figure for this question hoping to use it in lecturing as well. This is especially useful when teaching networking to non-electrical engineering students who don't recognize terms of impedance, differential mode noise terms, ...etc . By the way, interference in twisted pairs comes mainly from signaling on other pairs running together within the same cable which can have many of them. Thanks. @AlDmour.

With the image and explination, I understand how the six, even twists cause for both wires in the pair to be equally affected by ambient EMI, and the net delta interference to end up at +0. My question is, What happens if there is an odd number of twists in the wire?

How does the receiving end compensate for that, and/or detect the EMI and determine what mV on each pair it can ignore?

A even number of twists is better, but I am not aware of practical cable situations where this is worth the trouble: there are other sources of interference which are probably more important that the small difference it would make.

Another way to look at it: the amount of magnetic interference is proportional to the area between the two wires. With a perfect even number of twists the area is effectively zero. With an odd number of twists it is essentially one twist area. That is still a vast improvement over no twist at all :)

The an even or odd number of twists is for all intents and purposes arbitrary.

What is more important is the number of Twists per Inch (TPI). The higher this number, the more that noise cancellation will be achieved.

Why? well simply put any noise sources (magnetic fields, etc.) will usually vary over the length of the cable. If you can twist a cable more times, it means that each cable will more closely experience the same noise at any given point.

To visualize it, in the diagram you posted, in a more varying field, imagine that the wire at the top experiences noise on each twist are: 1mv 1mv 0.5mv 2mv 3mv 1mv or some other arbitrarily picked numbers. Then the one on the bottom sees: 2mv 1mv 3mv 0.1mv 1mv 2mv or whatever. Now they don't match up any more so the even/odd thing ceases to matter. Now if you were to double the number of twists, but not change the noise levels, you would see that each wire now experiences the same noise.

So really you would want two twists at any point that the noise sources change. In reality these change continuously, and every environment you use the cable in is different. At which point it basically ceases to matter if there are odd or even twists as the two could never be guaranteed to experience exactly the same noise, just close to the same.

The most common installation of Cat-5 cabling for network communications is to 10Base-T standards.

Over short distances, none of this matters. You could have ribbons wrapped around fluorescent lights connecting your network cards, if you stay under 10 meters. (Source: personal test just to see if I could do it. It was slower than 10Mbit because TCP had to error correct, but bits got through and eventually transferred files. Also, it wasn't tightly wound around the fluorescent tube, probably wrapped around 4 times per meter.)

Worst case scenario for in-code Cat-5 wiring of 10Base-T Ethernet is to have 3 100 meter segments using amplifiers between each segment. (Code says longest any length of Cat-5 for 10Base-T is 100m, and no more than 2 amplifiers between the 100m segments before you need a repeater.) Good luck finding an amplifier instead of a repeater, though: every switch and most dumb hubs produced today will repeat.

With this worst case scenario, you can string up an office building without any data loss, including noise from computers, fluorescent lights, the HVAC system, random aluminum plates, random iron girders, the electrical system, grounded objects like copper pipes for the sprinkler system and plumbing, etc. Naturally, if you're in anything noisier than an office building, such as a manufacturing floor that uses high voltage equipment, you'll want shielded twisted pair.

That's 300 meters without data loss, with at least 65tpm x 300m = 19500 twists on your green pair. There's not much difference between 19500 and 19499 twists in this worst case scenario, where twist-per-meter really does start to matter.

So, in the worst case scenario, you're better off planning your cabling route carefully to avoid high voltage, power lines, noisy EM emitters (lights), and grounded conductors than worrying about whether you have an even or odd number of twists.

Make the following Gedankenexpeirment (or do it with a real cable): If the cable does not run straight, but mostly bends back to itself so that both jacks it connects are relatively close to each other - what do you expect to happen if you rotate one of the jacks/devices by 180 degrees (or both by 90 degrees in opposing directions)? Nothing, of course. And yet, this rotation effectively changed the number of twists by one!

For a large number of turns \$N\$, that is very significant. The receivers are "robust" to small amounts of noise because the actual signal of interest is quite large. Further, you can add different circuits to increase robustness to noise. For example, you can add a "Schmitt trigger": this detects when the input reaches a certain trigger level (say 1 V) for the rising edge, then changes the level at which it will trigger again (say 0.8 V) on the falling edge. A small (100 mV) "jiggle" on top of the input signal will not be sufficient to cause an additional trigger: you will trigger once on the rising edge, and once on the falling edge.

There are many other sophisticated tricks for "clock recovery" that can help to clean up the signal. Twisting the wires is just one (very important - because cheap and effective) step.

Assuming this cable is laid in a normal environment, the noise accumulated in a single twist is tiny because: 1) the twists are small, and 2) the wires are close together.

Taken together, the voltage bias from a single, unbalanced, odd twist is insignificant.

Others answered the question well. Except:"How does the receiving end compensate for that, and/or detect the EMI and determine what mV on each pair it can ignore?"

The receiver looks at the difference in voltage between the two wires in a pair. It ignores, to a very good approximation, the signal that's common to both wires. As long as the difference due to the original signal is larger than the difference in the induced noise, it recovers the original data. This magic is known as common mode rejection, and it's the reason plain old telephone service, and really long microphone cables, work, despite induced 60Hz hum thousands of times larger than the signal.

3
Does the twisting in a twisted pair reduce attenuation?
0
Crosstalk between Wires in a single Twisted Pair
8
When should twisted pair wires be used?
1
3 wire signal to 4 core shielded twisted pair
2
How does twisted pair turn rate affect interference rejection bandwidth?
8
Is there any benefit to using twisted pair for short-distance I2C?
1
Would twisting 3 wires together be as effective (or close) to a twisted pair?
2
Effects of twisted pair in 120V AC
0
How best to allocate signal wires to 4 twisted pairs that best reduces inteference