I was reading about event driven simulation. Such simulations proceed after we have an 'event' which is the change in any signal value at the input of any design being simulated. The list of all the changed signals is added to what is called an 'event queue'. An 'event driver' then figures out what gates have these signals (inside the event queue) as input which in turn is passed to a 'gate driver'which calculates the output of the gates and stores the output in the new event queue. This constitutes one time step at the end of which signals in the event queue are assigned to the respective nets.
(For further details:http://cs.baylor.edu/~maurer/aida/desauto/chapter3.pdf)

Thus, I inferred that the signal assignments to the nets are always done at the end of each time step.

In the document I mentioned it is said that the assignments at C and Q will take place in two time steps. But suppose I code the circuit as follows:

Shouldn't the assignments at C and Q take place in a single time step?

Verilog, is a hardware descriptive language. So think from hardware perspective which, in the ideal case do not have any delays (though setup,hold etc. many delays are present).

Referring the code snippet, the always block will execute whenever there is any change in either a or b or c.

A blocking statement must be executed before the execution of the statements that follow it in a sequential block.

Non blocking statements allow you to schedule assignments without blocking the procedural flow.

Blocking and non-blocking assignments are better understood by following example: 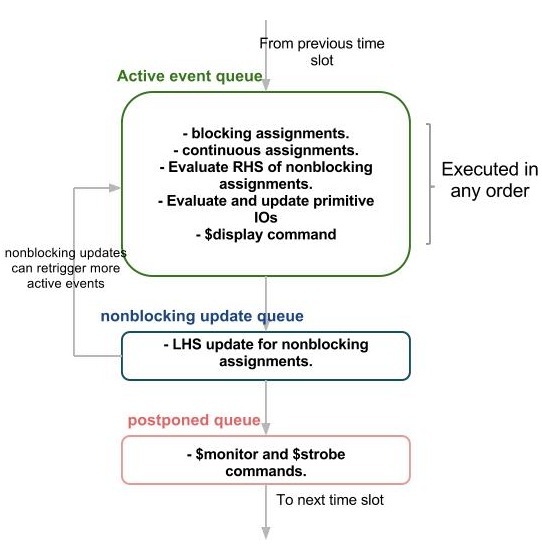 the basic event-driven technique provides a unit-delay model, in which the delay of each gate is assumed to be one.

The Unit delay Model assumes implicit 1 timestamp delay for calculation output of every gate. This is indeed true, since physical hardware shall have certain finite delay, thus justifying:

Simulated time increases by one for each subsequent execution of the Event Processor.

Also, this is just a general assumption, the time unit of delay varies according to time scale. While the above code refers to ideal condition output that a simulator shall produce (that is, with zero gate delay).

The two-phase structure of the event-driven simulation algorithm imposes a time scale on the simulation...It is usually assumed that an arbitrary number of simulated time units can occur between successive input vectors.

For the circuit, if both A and B changes, then according to event driven simulation model, G2 is evaluated since A has changed, at lets say at 0ns. Along with G2, G1 is also evaluated due to B at 0ns. Thereafter, G2 is evaluated once again due to C at 1ns, producing output at 2ns.

If either A or B changes, then G2 is evaluated once, since either of A or C shall change. If only B has changed, then it must take 2ns delay while changing A shall result in 1ns delay.

Refer to this and this material for further info.

Not the answer you're looking for? Browse other questions tagged verilog or ask your own question.

3
On the use of “BLOCK INTERCLOCKDOMAIN PATHS”
15
Difference between blocking and nonblocking assignment Verilog
6
Relation between delta cycle and event scheduling in verilog simulation?
6
Procedural blocks in verilog
12
SystemC vs other HDLs
1
<Verilog> Mixed blocking & non-blocking assignment
0
Unexpected indeterminate outputs from verilog conditional operator
1
outputs from Verilog finite state machine changing very late, possible reasons?
1
Is it a bad idea to use unsized integer constants in equality expressions in Verilog?