Using logic gates instead of Arduino

I have created a very simple circuit using arduino, in which I have 4 switches used to control the lamp ON/OFF as shown in the below schematic. 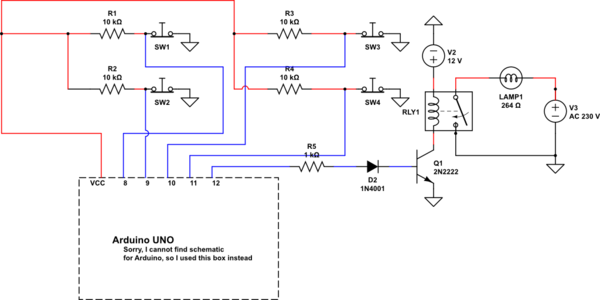 Here is the program written in Arduino IDE:

Basically, my original project has a Motor instead of Lamp, & the four switches shown above are the two pairs of switches in each tank. i.e. I have two tanks and two switches in each tank. 1 switch at the bottom of the tank to measure the water level. If tank is empty then this switch will be open. Another switch at the top of the tank, which will verify that if the tank is full or not and accordingly it will turn on/off the valve which is not shown in the below diagrams, as I think it's not necessary now.

The above circuit works perfectly, but now I want to complete the same circuit using logic gates, instead of arduino. I have tried the circuit shown in below schematic, but I was not successful as I am new to electronics & Logic gates.

I want to use logic gates instead of Arduino to bring down the cost.

I'll start by pointing out that your code is probably faulty. The last IF statement should examine switch 1 and switch 3, not 1 and 2.

With that said, let be restate your requirements:

1) If either SW2 or SW4 are open, start filling the tank (turn on the motor).

2) When both SW1 and SW3 are open, stop filling the tank (turn off the motor).

Right? And you do realize that this may cause one tank to overflow while the other tank is filling, right?

In this case, as @on8tom has pointed out, you need some sort of storage device, and a set/reset flip-flop is an excellent choice. Then 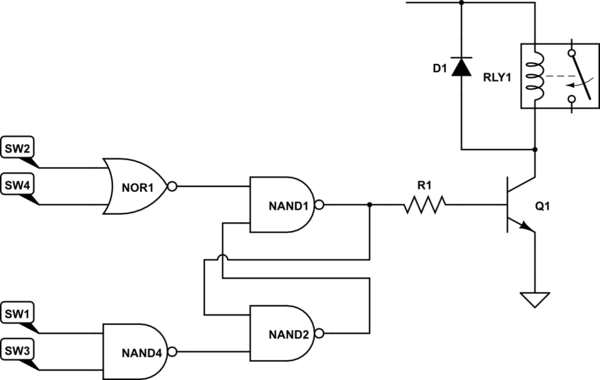 simulate this circuit – Schematic created using CircuitLab should do what you want. Note that I've added a flyback diode on the relay coil, and you should always do this. The diode should be rated for more current than the relay coil draws.

If your buttons are physical switches. you may place them in parallel. and in series. this will reduce the component cost.

and you have programmed a SET RESET. so you'll have to build a SET RESET like a FLIP FLOP.

there are various circuits to find on google.

Not the answer you're looking for? Browse other questions tagged arduino logic-gates boolean-algebra or ask your own question.

46
Why is there a diode connected in parallel to a relay coil?

0
Constructing a medical model: logic gates with feedback?
0
problem of transmitting data from serial device to bluetooth on Arduino
0
How can I create AND/OR logic gates using comparators?
0
Logic gates in a schematic
0
How to convert logic gates to multiplexer in a circuit?
0
Questions about signal and logic circuit
0
Reverse Engineering RS-485 Signals - Floating Issue
5
Boolean Logic - Realization with using only 4 NAND gates