What is the name of the sensor that most inkjet printers use to keep track of the print head's position?

I've been trying to build a cheap X-Y-Z table using mainly bits of old CD drives and printers I've got lying around. Since the printers already have a good single axis I would like to be able to, rather than having to buy a stepper motor and rebuild it, just repurpose the optical tabe the printer uses to keep track of the print head's position and keep the same DC motor. I've been able to extract the sensor the printer uses without damaging it or any part of the track, but I've been unable to find what the proper name of this sensor is, let alone documentation describing how to use it.

The sensor in question is in a black, plastic housing with a slit that the tape fits into. There are six pins on its underside that solder to the board, two of which come from something on top of the slit and four from something underneath. The black housing is labeled '6536' on top and '15' and 'DSO' underneath. My first guess is that the top is an LED while the bottom is a light sensor of some kind, but beyond basic checks (applying a weak current through the possible LED in either direction did not cause it to noticeably light up) I'm not sure how to get any more information out of it safely. 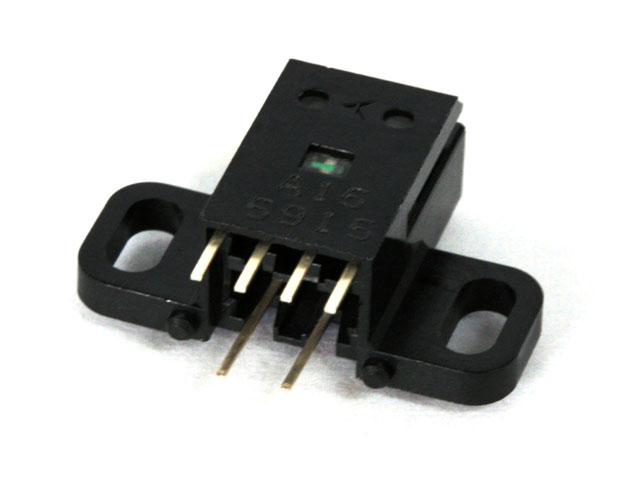 One side is an infrared emitter (which is why you can't see it--Infrared light is not visible to the naked eye) and the other side is the infrared receiver. The tape has very small stripes on it, through which light cannot pass. When this stripe blocks the IR light from the emitter, the receiver does not see it. When the tape continues to move, the clear portion of the tape eventually passes through. The light is then seen by the IR receiver, and the circuit can tell that the tape has moved.

It's an optical encoder just like in the old mice with the steel ball. It will not only detect movement but also the direction. That detection is done with some silicon. And that is the reason for the six pins You have discovered. Two pins belong to an IR-led (more or less easy to be identified with a multimeter), four pins are for the receiver, Vcc, Vss, left and right info.

There is info about how to identify which pin is what.

I see this is an old question, but I recently took apart an Avago optical encoder from an HP printer and can provide a photo of what is connected to the four pins mentioned in the question:

My first guess is that [...] the bottom is a light sensor of some kind." 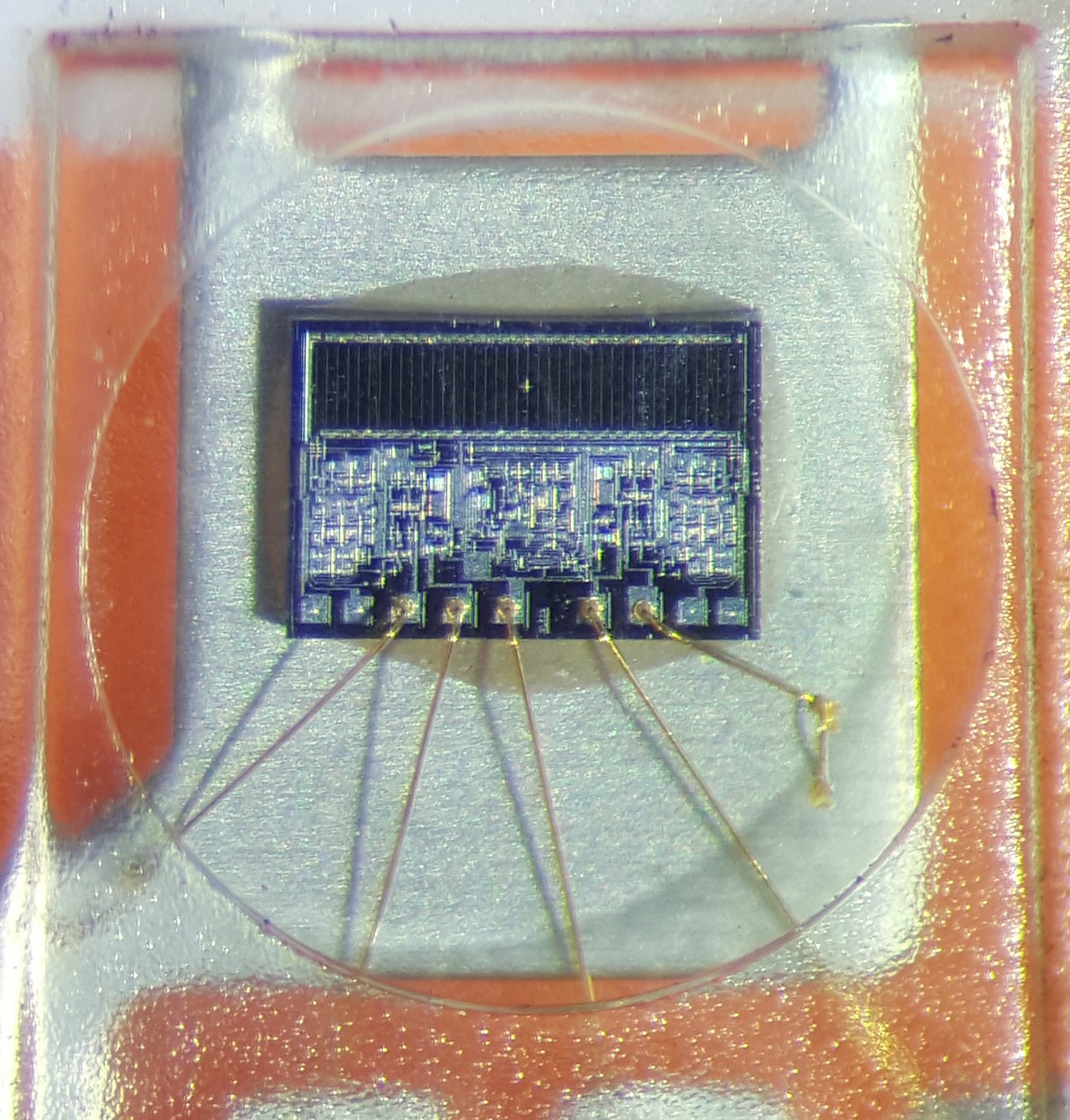 From the Avago AEDS-962x datasheet, here is the description:

As seen in Figure 1 ["AEDS-962x SERIES BLOCK DIAGRAM" below], the module contains a single Light Emitting Diode (LED) as its light source.

The light is collimated into a parallel beam by means of a single lens located directly over the LED. Opposite the emitter is the integrated detector circuit.

This IC consists of multiple sets of photodetectors and the signal processing circuitry necessary to produce the digital waveforms.

The codewheel/codestrip moves between the emitter and detector, causing the light beam to be interrupted by the pattern of spaces and bars on the codewheel/codestrip. The photodiodes which detect these interruptions are arranged in a pattern that corresponds to the radius and count density of the codewheel/codestrip. These detectors are also spaced such that a light period on one pair of detectors corresponds to a dark period on the adjacent pair of detectors. The photodiode outputs are fed through the signal processing circuitry. Two comparators receive these signals and produce the final outputs for channels A and B. Due to this integrated phasing technique, the output of channel A is in quadrature with channel B (90 degrees out of phase). 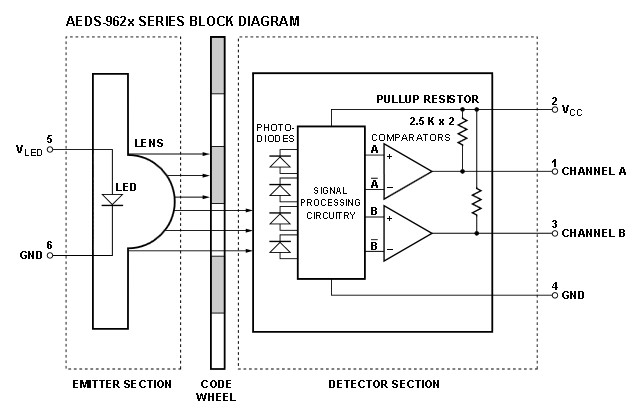 Not the answer you're looking for? Browse other questions tagged sensor terminology optics or ask your own question.

9
What is this four-legged part from under an inkjet printer head?
0
Optical encoder from printer always has about 1.60V on output

2
What is the use for a microcontroller in a temperature sensor?
16
Can an optical mouse be used to measure distance down to 1-10μm?
0
Need a fast, sensitive vibration sensor circuit that doesn't jitter
2
What decides the position of Hall Sensor in BLDC motor
1
What is the name of the current that creates the potential difference in an opamp?
1
Can't get low pulse from particulate sensor Shinyei PPD42
1
What is the correct name for a footprint that connects to a panel mount component?
1
ds18b20 temperature sensor data changes with additional lead wire