For testing various laser diodes, I need a constant current source, adjustable up to 150 ... 200 mA or so, down to... well, maybe 1 or 2 mA? (low enough to measure where is the lasing threshold where the diode stops lasing and becomes an ordinary LED). The voltage on these diodes when lasing is pretty low, so I could power the whole thing from a 9 V battery, I guess.

I could do the classic simple design with a LM317 and a resistor, but there's something I don't like about it: the resistor (control pot) that controls the current is in the main current path. I don't want that. I want the control pot to be in a section of the circuit where the current is very low (way, way under 1 mA), so the power dissipated on the pot is minimal, so I could use a higher-resistance pot, and the pot stays healthy a long time.

The reason why I need to keep the pot healthy: with laser diodes it is very important to not have any kind of voltage/current spikes on the junction, because it's so incredibly easy to kill them (*) so a few small 100 nF capacitors should be placed at strategic places in the circuit, such as on the control pot and on the output (I could do those tweaks myself, I just need the basic idea for the circuit, I can only envision complex designs - I need something simple and small).

Any suggestion for a very simple circuit that doesn't suffer from the problem described?

(*) - It's so easy to fry them that most people never disconnect the diode from the driver (the constant current source). They only disconnect the driver from the battery. Otherwise the risk of bricking the laser is too high. I fried that way a very nice 100 mW blue laser, a few months ago.

This is about as simple as it gets - and it meets your spec.
Replace zener with variable reference voltage. Transistor shown as bipolar can be FET.

That circuit comes from guess where :-)

Another.Diagram a bit small. Original was missing. Does high side monitoring which can be nice. 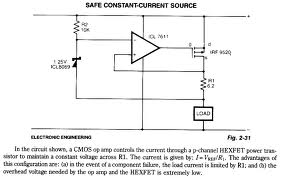 Our friends at Silicon Chip say at

Not the answer you're looking for? Browse other questions tagged laser reliability current-source constant-current or ask your own question.