Will this phototransistor circuit work?

I'm building an 8 stage coil gun for a physics project, and I want to verify this circuit as I've never used a phototransistor before and I'm still pretty new to mosfets. Here is a schematic: 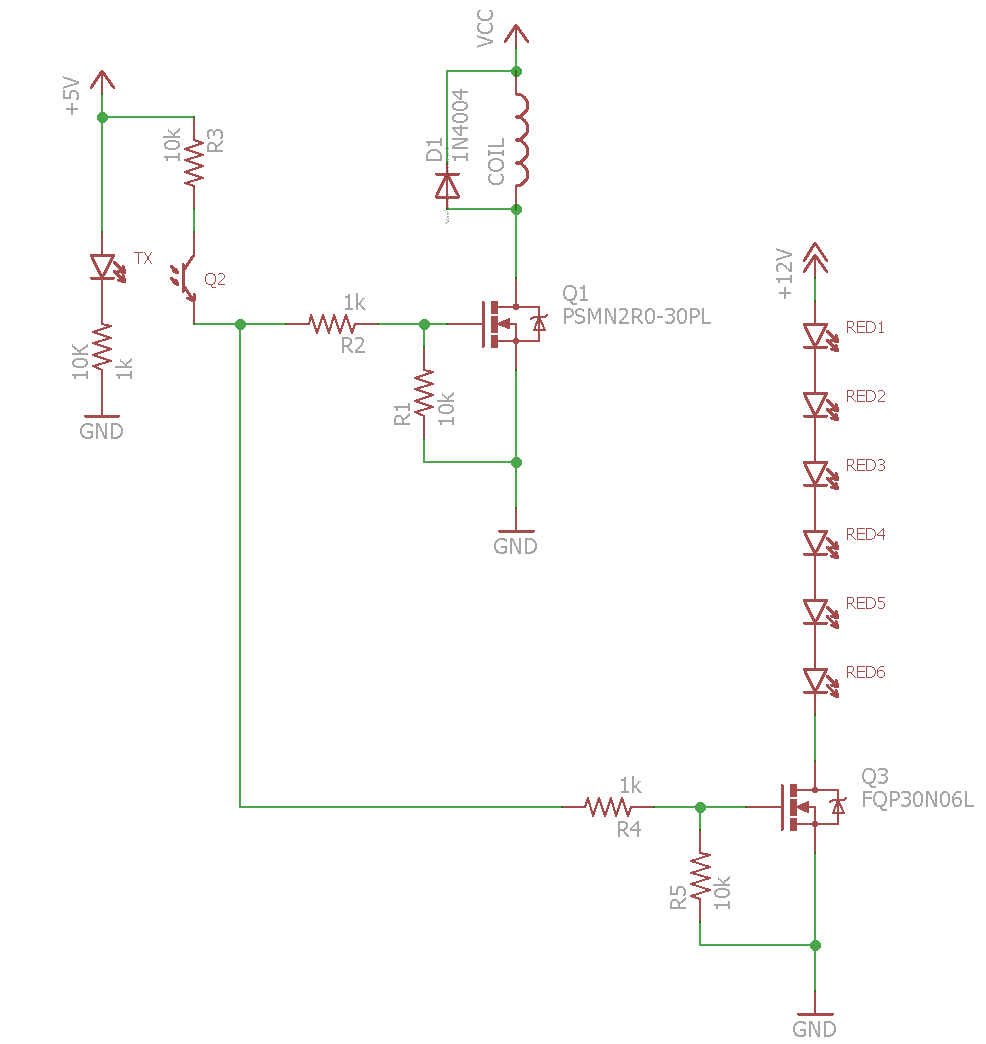 As a side note, the coil will only be on for a tiny fraction of a second. If I hook up the red LED's to the red channel of rgb LED's that have blue on constantly, will a purple wave travelling down the stages be visible, or will I need to extend the red channel pulse? I could use a capacitor charging circuit between two NAND gates I guess, but I want to minimize unnecessary circuitry so it can all fit in a small-ish package.

Thanks for the help; I'll probably be back shortly with some troubleshooting for the actual coils haha.

EDIT: this is the phototransistor I'm using: https://www.sparkfun.com/datasheets/Components/LTR-301.pdf

EDIT 2: could I hook up 12 v to the phototransistor, or would I risk overvolting the mosfet? I need to break the mosfet's activation voltage, which the pullup resistor might prevent from happening.... Also not having to route a 5v line helps.

Is the penny blocking the light or reflecting? Depending on what its supposed to do you might have it reversed. When the phototransistor receives light and conducts the FETs would be ON.

Except that you have a voltage divider across the gate: R3 + transistor + 1k, then gate, and then 10k. So you'd be lucky if your gate saw 2.5V in this config, which is a bit low to turn mosfets on. I'd use smaller gate resistors and a smaller R3.

Also I'd add a small resistor in series with the LEDs just in case..

Not the answer you're looking for? Browse other questions tagged transistors mosfet coil phototransistor troubleshooting or ask your own question.

0
Critique my Soft-start circuit
6
Mosfet Depletion Region?
5
Choosing a MOSFET for solenoid control via Arduino
1
Is a gate resistor needed on a 2n7000 mosfet when driven by a 4543 BCD for multiplexed led display?
1
What's happening to this 2N3906?
0
LED matrix - MOSFET driver leakage?
1
IR Detector with two indicating leds
0
Power Source Switching (my first circuit) -- will I blow anything up?
3
MOSFETs not activating - is this transistor the problem and can it be subbed?