How is a connector with only edge contacts as in MagSafe practically possible?

I'm rather puzzled with MagSafe connector - the close-up photos of the part which is on the device show that there're no holes, only round curved plates and the contact pins on the opposite connector part are just placed against those plates.

In usual connectors there's usually a rather long thin pin that is inserted into a variation of rather long thin hole and this provides huge contact area and also the act of insertion cleans the surfaces and this addresses possible dirt on contacts.

I wonder how would such connector address dirt on contacts and also pass rather high power (up to 85 watts) without overheating, burning and sparking?

When you insert an IC into a socket or plug in a USB plug and similar r=the primary action is metal sliding along a surface and coming into face to face contact. There will be some form of "spring" pressure to hold them in contact. Once gross oxide film is removed you usually get OK connections. Rub off all the oxide films and in many cases they would weld together.

In the case of the Magsafe connector it appears that the mating surfaces are Gold - probably Gold plus something to make it wear less. Gold does not form an oxide film (to iner) or perhaps rather, what film does form is extremely tenuous and almost wiped off by mechanical contact. 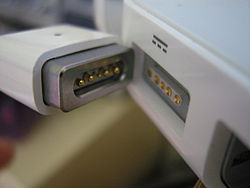 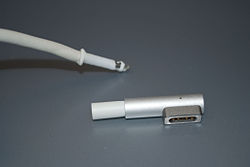 Note that connectors that appear to mere mortals to work in exactly the same way (magnetic latch, surface contact, pull apart disconnect) have been used for many years on eg deep fryers for safety reasons.

BUT note that the page that you cited says

As for how well they work - probably well enough but not as well as a properly designed connector.

2
How is damage by pulling sideways usually addressed in connectors?

3
How to assemble male USB A connector?
23
Suggestions for small and handy connector for in-circuit programming?
19
What's the need for conductive bridges between the regions of a smart card contact pad?
5
Easier-to-machine alternative to pogo pins?
13
What are those wire terminals that mate with standard header pins?
23
Preferences: Male or Female connector on board
1
Do double sided 2.54mm pin headers exist?
45
What are the advantages of this gold finger shape?
1
Custom card edge connector components