Does a carrier wave need to be sinusoidal?

I am trying to AM modulate a song and I have an idea of how I am going to do it, but I need a carrier wave to start with and I've been having trouble creating one with a ceramic resonator because I don't have a CMOS inverter.

So I thought I would go shopping for an IC chip that can give me a carrier wave of 500kHz and one for 700kHz. However, I don't know what I need to buy. I understand the theory behind a carrier wave, but because I plan to use a BJT for the mixer. I have the suspicion that I could use a digital wave from the oscillator on the collector and the signal to modulate on the base.

Note that the diagram is meant to be basic to show my idea.

Anyway, I don't know much about carrier waves besides building an AM radio receiver and I don't know anything about amplitude modulating a signal.

Would my idea work, or am I going to waste my money if I buy a chip that oscillates only square waves? Any part or schematic recommendations?

Square-wave carrier systems are actually not uncommon in cable, fiber optic, or even line-of-sight optical communication systems, but it is important to note that these are closed-channel systems; effectively, all energy the transmitter produces for the most part can be assumed as being received by the receiver. The benefit here is that the transmitter and receiver also need not care about the other undesirable (harmonic) information that was generated.

For RF transmission over the air, square waves generate a lot of ugly odd harmonic content that would violate the FCC's restrictions on bandwidth; that harmonic content would be a lower-power, lesser-quality version of your original modulated signal on a separate frequency and the obvious consequence is interference to other users. One (notable) exception to this rule-of-thumb would have to be Class D AM transmitters, which work by pulse-width modulating a square wave signal. These manage to work because they have a very stringently-designed output filter that strips out the harmonic and switch noise from the transmitter signal.

Note that this can be tightly filtered-out, like the Class D example above, by means of an output filter on your modulator/transmitter; you would simply design a band-pass filter to pass your modulated bandwidth around the carrier frequency while giving every other signal frequency a high degree of attenuation.

So, in short, the use of a square wave as a carrier does work, but for air RF transmission, it's likely that the increase in complexity of output filter design to ensure permissible spectral output trumps the use of a square-wave source.

Have you considered using a LC circuit (i.e. Colpitts or Hartley oscillator) or a crystal oscillator circuit as your carrier feed source? These can be constructed quite cheaply with a BJT and inductors/capacitors and tend to generate good sinusoidal waves with varying degrees of stability. They also have the benefit of being quite well-characterized by the amateur radio community.

The following is a Colpitts design I found from one of my EE texts, with many of the component values omitted to allow this to serve as generic of a schematic as possible: 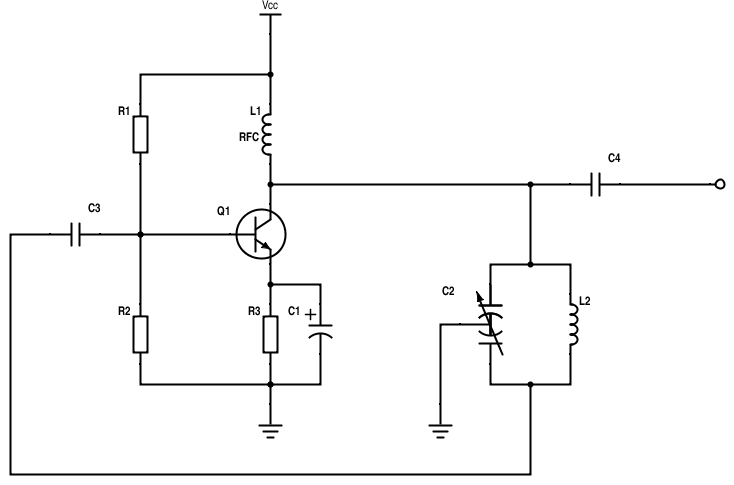 Here, \$R_1\$/\$R_2\$ serve to bias the NPN transistor, \$C_1\$ is the emitter bypass capacitor, \$L_1\$ is a RF choke designed to prohibit the RF generated from seeping back into your power supply (as in Sean's comment on the other answer), and \$C_2\$/\$L_2\$ is the Colpitts tank circuit that generates the oscillation. Note that I constructed it using a split-stator/dual-gang variable capacitor. This allows for this circuit to be variable-output.

As I mentioned below, the resonant frequency of this Colpitts oscillator is given as follows:

The effective capacitance of \$C_2\$ is the equivalent of each of its gangs in series, so:

where \$C_a\$/\$C_b\$ are the capacitances of each of the gangs. Because most gangs are held for the most part in lock-step, this can improve to \$(\frac{1}{2C_g})^{-1}\$. Inaccuracies in the frequency desired versus frequency produced is likely due to parasitic capacitances in the circuit, and stray capacitance such as the inter-winding capacitance of the inductor. You can also add additional capacitance to the tank circuit to help corral or offset the frequency range from where it would otherwise be.

A pure sine wave consists of just one frequency. Anything else is said to be composed of a mix of sine waves (look up Fourier Analysis). In fact, modulation is a particular way of mixing your audio signal with the carrier. Any undesired deviation from a pure sine is called distortion. A square wave contains odd harmonics, all of which will be part of the resulting signal along with the added audio signal.

The carrier's harmonics, if you used 700kHz, would appear as another signal at 2100 kHz, 3500 kHz, 4900 kHz, and so on. The audio will be there, too. These extra harmonics can be filtered out, but then you're throwing away all the energy that was diverted into making the harmonics in the first place. The extra signals are also frowned upon by regulatory agencies, as they almost always interfere with someone else's operation.

It might be practical to filter the carrier down to a sine wave before modulating it, and a lot less energy is wasted if you do it at the source. But a square wave is not an ideal carrier source, at least in traditional radio techniques.

Not the answer you're looking for? Browse other questions tagged rf signal oscillator modulation mixer or ask your own question.