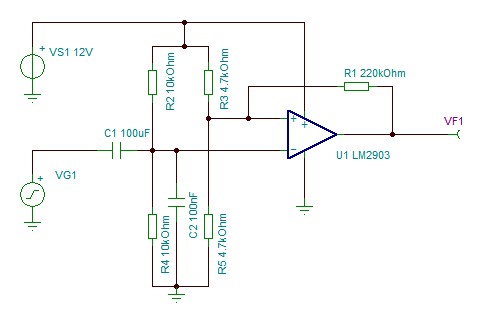 I have the above circuit to convert mV level sines to pulses. It is a working design I just simulated it. 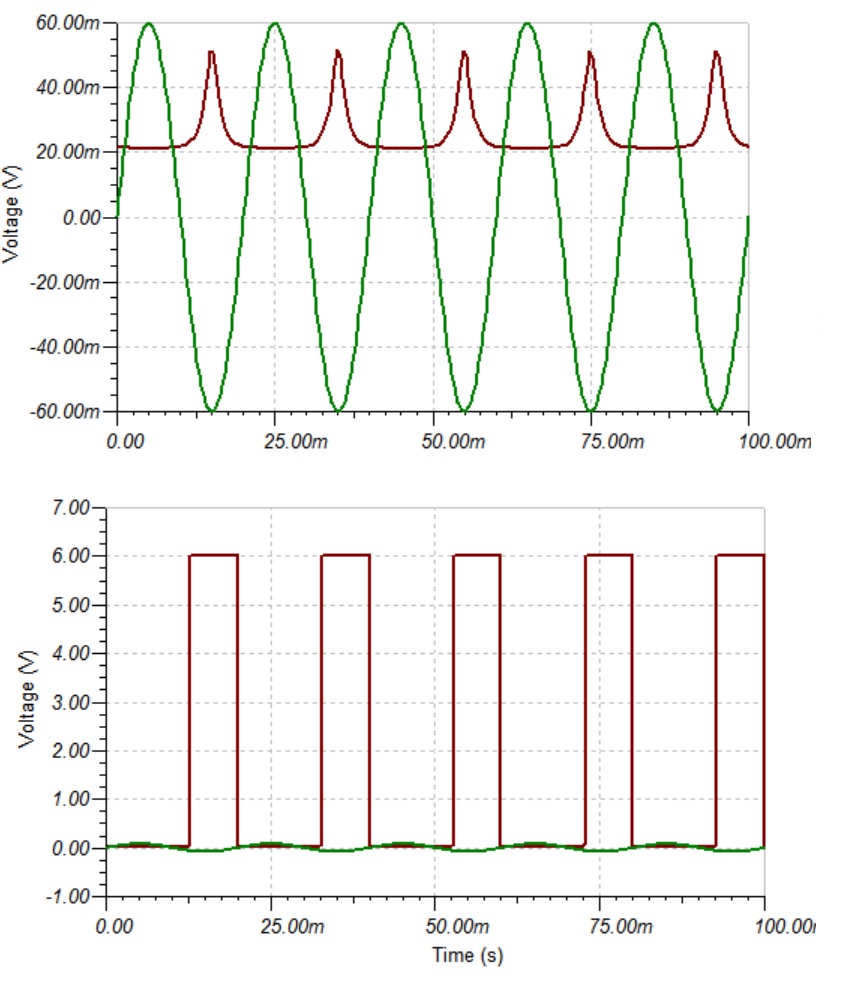 1-)How can I lower the sensitivity. For example to be able to convert pulses even at 10mV without using another op-amp?

Before I can address either question, you need to modify the circuit. Connect a 1k resistor from VF1 to +12. As it stands, the output has a swing from zero to about 6 volts, but will only do this while driving a high-impedance load such as CMOS.

Now for question 2. R2 and R4 produce a nominal 6 volts, and C1 AC couples the input, so the signal now swings around that 6 volts at the - input to the comparator. R3 and R5 also produce a nominal 6 volts at the + input, and this forms the reference level for the comparator. R1 provides positive feedback, also called hysteresis, and ensures a clean transition from high to low and back again.

In principle, this hysteresis is what's causing your problem, although it's only part of it. Let's say the - input is more negative than the reference input, and the output is high. No current is being pulled through R1, so the output is at 6 volts. Now drive the signal higher than 6 volts. The output will go low, and the + input will drop by $$\Delta V = 6 \times \frac{\frac{4.7k}{2}}{\frac{4.7k}{2} + 220} = .063\text{volts}$$ While that number might seem to explain your problem, it doesn't. Basically, you got lucky with your resistors. The two voltage dividers (R2/R4 and R3/R5) will only give exactly the same voltage if the resistances have exactly the same ratios, and you are probably using 1% resistors. If you take these tolerances into account, you could get another .063 volts of difference, which would limit your useful amplitude to 126 mV. Like I say, you got lucky.

EDIT - Well, I take that back. You didn't get lucky, exactly, it's just that the simulator used identical resistor values, so it's the equivalent of using extremely high-precision resistors. So my calculation is only necessary if you actually build the circuit in real life. END EDIT. 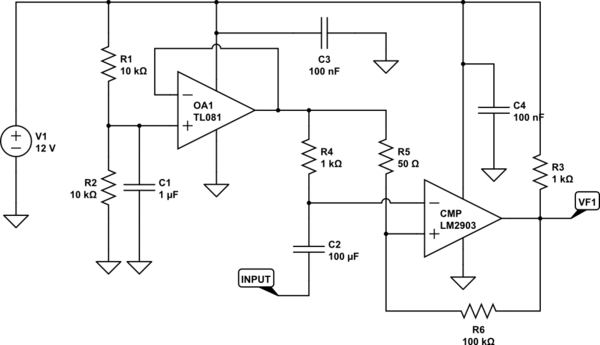 EDIT - Since a zener is acceptable where an op amp is not, R2 can be replaced with a 6-volt zener, R1 with a 300 ohm resistor, and OA1 and C3 eliminated, as shown below 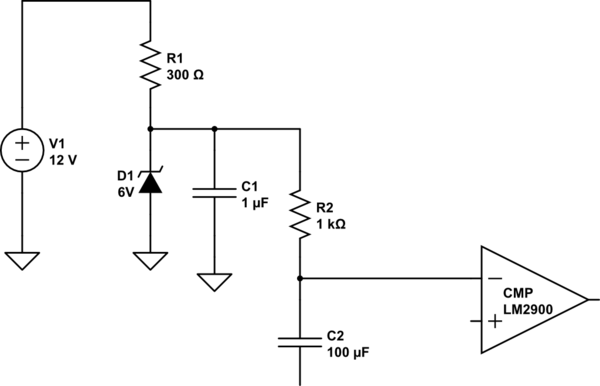 This references both inputs to the same voltage, and the hysteresis is reduced to +/- 3 mV. In theory, this will allow switching on a 6 mV (pk-pk) signal. However, this also ignores the fact that the comparator has an input offset voltage, which can be as great as 9 mV, so a 10 mV signal may not be possible.

Also, with the reduced hysteresis noise on the signal may become a problem. You'll need to be careful in your construction and shielding, and do not forget to add a 0.1 uF ceramic cap to the power lead of each IC as shown. Install these as close to the ICs as possible, and a ground plane is a very good idea.