Basically, I would like to switch a load that requires 30v using a switch that cannot have more than 5v across it. More descriptively, I am trying to drive the anode of a VFD segment from the output of a shift register (probably a 74HC595).

What I Have So Far:

Because the segments are essentially common-cathode, the anode has to be switched. You can't really switch that with an N-Channel FET, as when current is flowing drain to source, the source would instantly be at ~30v, which being higher than the gate voltage (5v), would instantly turn off (I guess maybe it would actually reach equilibrium at some very low conductance?). If a P-Channel FET were used, the gate can be pulled up to the 30v rail for off, but then you have 30v at the logic output, which is far, far outside of spec. Short of shifting the logic-level ground up to 25v, which seems like a major pain, the best that I can think of is to add an N-Channel FET to drive the main P-Channel FET, and pull down the gate of that to ground, like this: 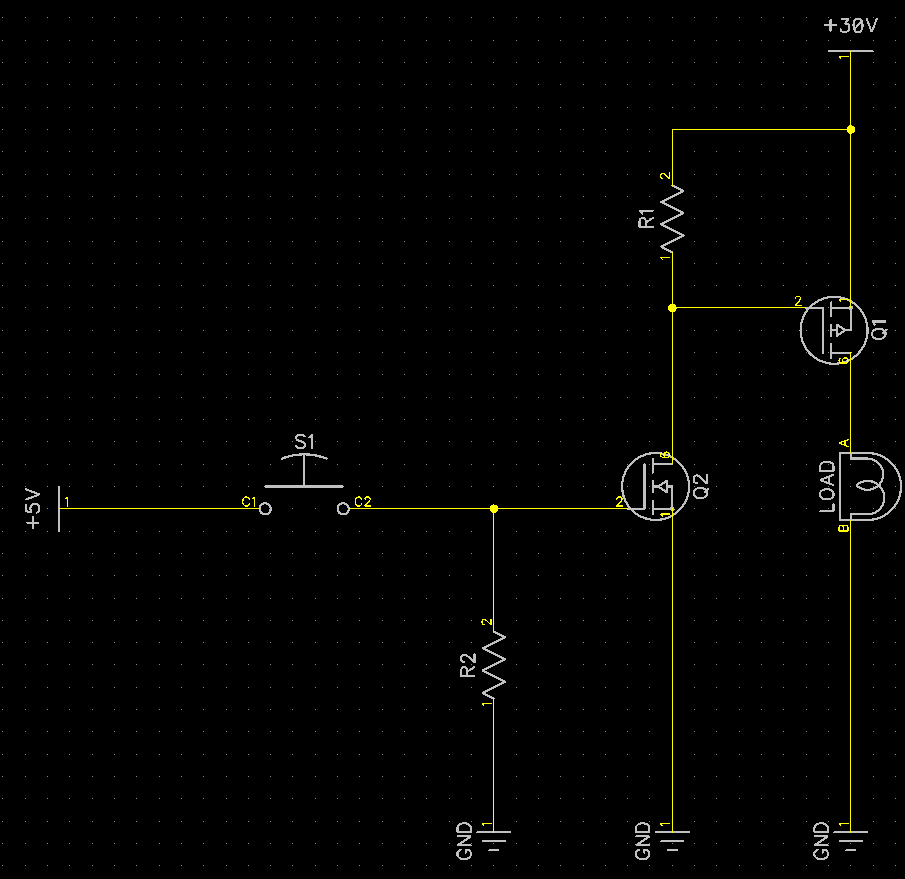 (I showed it with just a simple switch and load rather than an IC output and a floating anode so that this will be hopefully more applicable and/or easier to understand for people with other applications...)

The problem that I have with this is that it seems like an excessive number of components for such a simple task. There has to be a simpler way to switch the higher voltage, right? I feel really stupid having so much trouble with something so simple, but I've spent all day on it, and this (or shifting up the logic ground) is all that I've been able to think of. I guess in the grand scheme, it's only one extra transistor and one extra resistor, but it kind of adds up when you're driving a large number of lines...

You can indeed get rid of Q2, although a normal open-drain part will have trouble with high voltage on the drain as the output FET will break down -- normal HCMOS output FETs are not rated to drive 30V! A part like the TPIC6B595 will do the job, though -- that right there will save significantly on parts count.

Once you have the level-shifting handled, you can then use a high-side switch array to take care of the rest of the work. (Oh, and the pullup on the output of the TPIC6B595 can be a resistor-pack, if that helps you any.)

Or, you can simply use an integrated high-side driver/level shifter array.

There has to be a simpler way to switch the higher voltage, right?

No, there isn't. Not from the high side. You can put a single N-channel FET on the low side of the load though.

If you use an open-drain or open-collector device where you have your 5V switch, you can reduce the parts count though by eliminating Q2. But conceptually it's the same thing.

Also, there exist integrated high-side switches that incorporate Q2. These can be frustrating to find for your application because a lot of them only go up to 8V on the high side (they shift from really low levels like 1.8V), e.g. TPS27081A, NTJD1155L, Si3865DDV. IPS511 would work for you voltage-wise, but it has more stuff in it than you probably want [over-temperature protection etc.] and I don't know if you can still buy it. Shop around, there are surely more.

There exist some high-side switch/driver arrays of this kind; TPD2005F would work and has parallel inputs. This one "cheats" by actually having a charge pump and N-MOSFETS as outputs. There are a lot more with serial inputs, e.g. AMIS-39101. You could of course just buy one such array dedicated for VFDs at this point, e.g. MAX6922, or even an integrated array+controller like STM86312.

Which one of these to chose depends how much of a DIY exercise you want to make of this...

This circuit has a problem -- when Q2 turns on, it will put 30 V across R1 -- which is also the VGS of Q1-- and this will exceed its specification significantly.

There are a few ways to fix this, but the most robust is to put a 5 V zener in parallel with R1 to keep the voltage reasonable. Now, to control the total current, you have to put a new R in the source of Q2.

Assuming your speed requirements are simple, here are some good values to use:

Not the answer you're looking for? Browse other questions tagged switches level-shifting logic-level pmos vacuum-fluorescent or ask your own question.