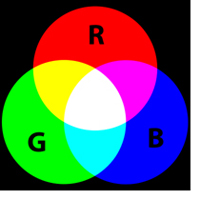 23
Why are there only RGB and RGBW-LEDs, but none with more chips inside one housing?
3
Human perceived (relative) brightness of indicator LEDs
1
LED perceptive intensity by Color
1
Bi-color LED Intensity + Color Control
0
Efficiency of green High Power LED compared to efficient white
1
Multiplexing Red and green dual led not being switched on properly
1
Why do blue LEDs have more candelas of luminous intensity than the green ones, in general?

6
RGB LED - Set intensity on Red and Blue
4
LDR + RGB Led = Color sensor. How to calibrate it?
4
How can I stop the flicker of LEDs?
3
How to compare brightness of different color LEDs (not RGB)?
2
Why is my RGB LED strip passing current through the transistor?
3
Keep constant LED intensity using 3 leds (RGB) with different duty cycles (for different colours)
1
RGB led weird color behaviour (blue except when touched to skin)
1
How do I interpret an RGB LED max amperage given as a range e.g. 30mA-70mA?