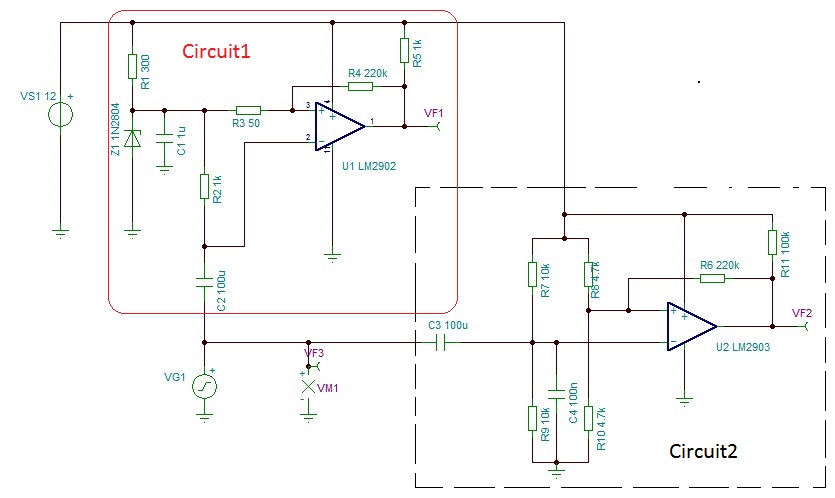 I have two circuit simulations: Circuit1 and Circuit2 which are shown in above schematics. For the sake of simplicity I drew them in the same schematics. They share the same 12V voltage source and the same signal input VG1. VF1 is the output for the Circuit1, VF2 is the output for the Circuit2 and VF3 outputs the input signal VG1. Zener diode in Circuit1 is a 6.8V zener. Both circuits use LM2903 comparator.

Circuit2 is the one I had before and it could only convert sine inputs more than 60mV peak to peak. With a suggestion from my previous question I simulated Circuit1 and this can convert sines around 6mV now.

That was great but when I plotted the results I found out the comparator's pulse outputs are not sharp in mV level inputs. Here is an output for 6mV sine:

As you can see VF2 is hopless. VF1 can handle 6mV sine but the pulses are not sharp.

Another thing I observed for 80mV sine input is that, Circuit2 output is not in phase with input signal but Circuit1 output is. But Circuit2 on the other hand produces sharp pulses unlike Circuit1. Here is the plot:

And finally for 1V sine input, both pulses are quite sharp and they are both in phase with the input signal. And the plot becomes as follows:

It seems like for minimum phase differences and minimum sine inputs better to use Circuit1. But then for mV level sine inputs I'm not happy with the sharpness of the output pulses.

My questions are follows:

1-)What would be a quick fix for Circuit1's sharp-pulse problem without using another op-amp?

2-)If another op-amp is definitely needed, would it be that a Schmitt trigger should be added to the output of Circuit1?

a suggested circuit(waiting to be edited):

I would not bother trying a "quick fix". I would instead try the following circuit

Basically, it requires the addition of 1 op amp and two diodes. I've shown a TL081 as the op amp, and this will work in simulation down to 1 mV or less, but it eventually runs into input offset voltage problems. If you can find an op amp with much less input offset, you can do even better. For a real circuit, get an op amp which includes an offset adjust pin, and use this to produce an op amp output of zero with zero input.

You'll also note that the comparator output is inverted with respect to the input, but that is easily remedied in logic.

EDITED TO ADD - And in the name of all that's holy, get rid of the 1N2804. It's a 50-watt zener, and is operating far below its recommended current level. A 1N4735, as shown, has a 6.2 volt rating and appropriate current levels.

2
Comparator question for weak sine inputs
1
Voltage divider or zener clamp when coupling a comparator output signal to a DAQ?
10
Comparator: Noisy sine to square wave, how much phase noise?
1
Can this comparator input exceed its supply voltage?
1
Some questions about a comparator circuit used as a buffer
4
Why does this comparator exhibit non-binary behaviour?
1
Problems while using op-amp as a comparator on a single supply
0
Help with design a mic preamp with opamps for PGA and ADC
0
Unexpected voltage shift in zero-crossing detector circuit