What is the point of converting everything to NAND/NOR and how do you do it right?

The title pretty much says it all. I know that A' + B' = (AB)' is the basic transformation needed to do so (at least for NAND gates), but whenever I apply this I feel like I'm doing it wrong. For example:

Here's what I did:

which reduced the problem to:

Which further reduced down to:

Is this the right way to do this? Also, why is this form sometimes wanted? It seems more complicated than the original form.

The most convenient form of amplifier for use in a gate - because it has high input impedance and useful voltage gain - happens to be inverting. This is true whether it is a BJT (common emitter) or FET (common source) amplifier.

Thus a gate formed of a single amplifier stage MUST have an inverting output - that means it can implement any of NAND, NOR, or NOT. (There are a very few exceptions, like ECL, whose lack of gain makes them very intolerant of voltage variations)

So if you look at an AND gate - or an OR - you will find a NAND followed by an inverter - or a NOR + inverter.

That makes AND not only more expensive and power-hungry than NAND, but also slower.

The fact that any combinational boolean expression can be rendered into sum-of-product form (AND then OR), and trivially transformed into NAND-NAND form simply by inverting all the intermediate signals (using DeMorgan to implement the OR function with NAND gates) makes a network of NAND gates incredibly attractive way of implementing it. (Ditto Product-of-Sums, using only NOR gates). 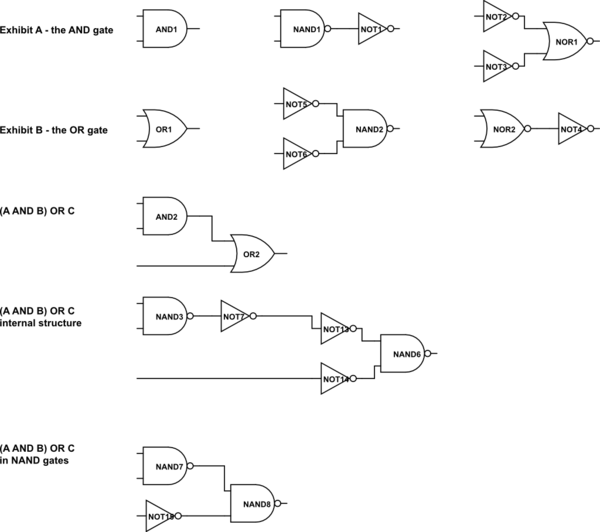 This shows how AND and OR gates can be implemented using either NAND or NOR technologies (Exhibits A and B).

It also shows how a simple expression in SOP form (A AND B) OR C would be implemented if you simply used AND and OR gates formed from NAND blocks.

Hopefully it's obvious that all you need to do is delete pairs of inverters to arrive at the final NAND circuit.

The result uses only 2 levels of gain instead of 4 if you used AND/OR, so for the price of a little extra thought, your logic is twice as fast.

The point of converting functions to NAND or NOR is the fact NAND or NOR are forming a complete logic systems, which means that any boolean system can be implemented only by using the named gate. This is not the case with the OR, AND and NOT gates. Using a single type of gate is simplifying the implementation of synthesis algorithms and the underlying hardware. As for the concrete example in the question - it can be verified by checking the truth tables of the original and the resulting expression, and I believe you can do it yourself.

ANDs and ORs do not exist inside ASICs. All logic gates can be made from NANDs or NORs, so they are known as universal gates.

Not the answer you're looking for? Browse other questions tagged digital-logic nand or ask your own question.

-1
why use not gate to build driver and receiver
56
Why is there no `nand` instruction in modern CPUs?
0
How would I draw A'B' + B'D + A'CD using only NAND Gates?
1
I need some clarification/explanation on how this digital oscillator works
0
Why are complementary gates inverting?
1
I am trying to implement a function using only NAND gates
-3
Using only NAND and NOT gates to represent a logic function that isn't an SOP/POS?

0
How can I get a broad overview of the world of electronics?
6
How to build a 3-input NAND gate from 2-input NAND gates or a 3-input NOR gate from 2-input NOR gate?
0
Is my jk flip flop missing two NAND gates to be complete?
0
Low voltage form a NAND logic gate then the state is high
0
Circuit using only NAND gates
0
What happens when you nand the same input?
16
What is the lowest level of CPU programming above transistors?