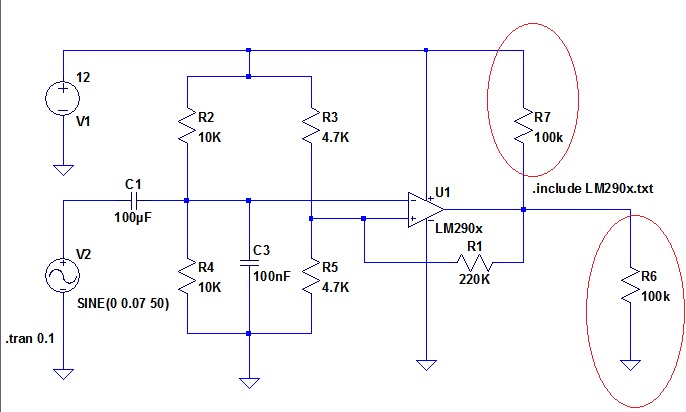 I have a basic question about determining the output impedance of a circuit. Output of this circuit is through R6 in the Figure above. This will be an input for a data-acquisition hardware channel which has 1Gohm input impedance. Setting R7 and R6 an equal resistance, the output can be adjusted to 6V pulse.

So far so good.. My question is as follows:

Seems as long as R6 = R7, all works if you just want to have 6V output. But it kind of didn’t satisfy me choosing an arbitrary resistor values.

So in my case which R6, R7 resistance you would choose for an optimum circuit design perspective and why? What is the basis principle of choosing the output impedance here? Is that the current drawn?

The output stage of the lm290x series comparator is an open collector bjt. 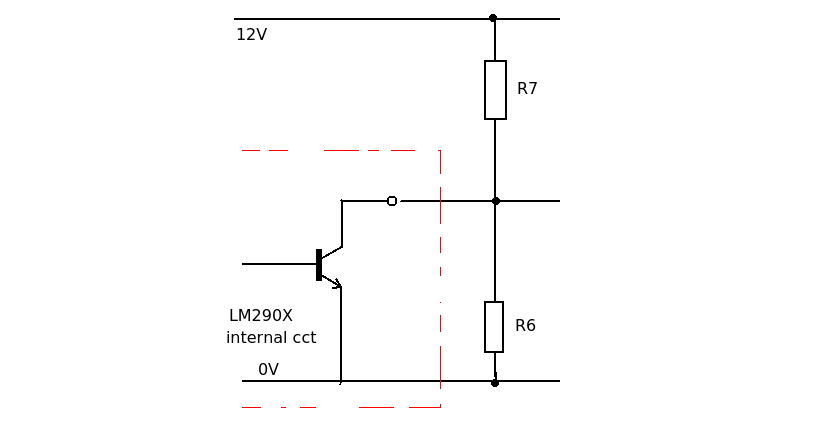 R6 and R7 are simply acting as a voltage divider. If R6 = R7 the voltage at the mid point will be half the supply (i.e. = 6V) regardless of the actual value chosen between 1k and 100k.

Over this range of resistance the current through the output transistor will of change, this has the effect of changing the saturation voltage across the transistor (typically 100mV).

The data sheet (http://www.diodes.com/_files/datasheets/LM2901_03.pdf) suggests a range of 6mA minimum with 16mA typical. This minimum value would be achieved with R6= R7 = 1k0.

To identify what output impedance a part of a system should have you need to know a lot of thing, some of them you have not specified.

If you don't have the static losses of pull-up resistors, generally you try to get a low output impedance, since this gives drive strength. Capacitance on wires or PCB traces will make your rise times slower the higher your output impedance.

That said, there are reasons to not go for the lowest possible output impedance, or the highest possible input impedance. One such reason, which is very common, is matched impedance with the medium.

For example, if you would be using a specific cable between this block and the next and that is of 100Ohm characteristic impedance, then if you have a long way to go (where what is long depends on the sharpness of the flanks and the signal frequency) you will want to match that impedance at least on one side, possibly on both, to be able to transmit without reflections.

But, basically, the checklist I most commonly run through is:

And I probably forget a few here that I either instinctively judge in the process of any of the other steps, or that are more specific to certain designs I have not made in the last 5 years. Apart from that, my apologies that I couldn't write this as a simple flow chart with side-notes.

Not the answer you're looking for? Browse other questions tagged impedance output or ask your own question.