1000BASE-T uses all 8 wires in a twisted pair to both RX and TX at the same time. It does it using (what seems to me) a complicated process known as echo cancellation. Details here.

1000BASE-TX dedicates two pairs (four wires) in a Twisted Pair to TX only, and the other two pairs to RX only. Conceptually, this seems far simpler to implement and work with than the alternative.

My question is, why did 1000BASE-T become the de facto standard for Gigabit Ethernet? Why not implement the (apparently) simpler standard of 1000BASE-TX? Why didn't 1000BASE-TX gain more popularity than 1000BASE-T?

Wikipedia had this to say about it:

However, [1000BASE-TX] has been a commercial failure, likely due to the required Category 6 cabling and the rapidly falling cost of 1000BASE-T products.

But I was hoping for a more detailed explanation, or maybe alternative reasons entirely.

I'm not entirely certain of this, but given who advanced this 1000BASE-TX standard, namely TIA (aka the cable people, the standard being TIA-854) and not IEEE, I have the strong impression that it was largely a promotional exercise for Cat 6... a standard which is also defined by TIA. This impression was reinforced by reading how this standard was described as one of the first Cat 6 applications. I wasn't able to locate any vendor who made a PHY product for this 1000BASE-TX... although I've read in vague terms that something might have existed.

In order for a PHY [standard] to have success, it needs commercial backing... from a PHY maker (not cable guys) In this case it seems none was really there.

It's worth noting that 100BASE-T4 vs 100BASE-TX wasn't entirely the same affair. At least there the latter had a bonus in terms of full-duplex operation. Also 100BASE-TX was actually part of IEEE802.3.

For budgeting purposes, and for the sake of this discussion, plan on Cat 6 costing roughly 30% more then cat 5e, and Cat 6A 30% more than Cat 6.

But at least nowadays the latter lets you run 10GBASE-T... up to 37m-55m on Cat 6 (exact max depends on nearby cables) and the usual 100m on Cat 6A. 10GBASE-T also uses all four pairs. There's not even a whiff of a "10GBASE-TX", by the way. Apparently those who design these PHY things concluded that more parallelism is preferable to faster clock... after a certain threshold. This is perhaps not unlike what happened with CPUs.

Also, this 2006 Broadcom presentation [on 10GBASE development] doesn't even mention the [2002 or so] 1000BASE-TX so the latter was probably a complete flop from the start. 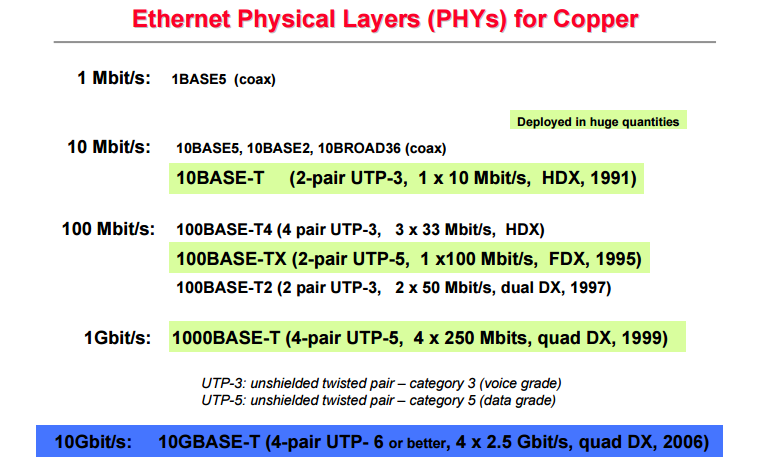 Also from later slides of the same presentation, work on 10GBASE-T started in late 2002... so I think the IEEE efforts/focus went into that instead (rather than more gigE copper standards that apparently were not exciting for chip makers).

Oh yeah, the final nail[s] in the coffin are:

I would say that it is a tradeoff between the price of interfaces and the price of using more expensive cables (and having to change the cables in buildings).

Cat5e is certainly much cheaper than Cat6 and was installed for 100Mbps with the prospect of upgradability to 1Gpbs.

The inverse occurred between the Cat3 100BASE-T versus Cat5 100BASE-TX. 100BASE-TX won but the advanced encodings (which allows to reduce cable bandwidth) from 100BASE-T were eventually used in 1000BASE-T.

15
What if there are an odd number of twists in a twisted pair cable?
12
How does “bidirectional” transmission on gigabit ethernet work?
1
How is a Twisted Pair's +-2.5v used to send a 1 or a 0?

5
Why is 1000Base-T RJ-45 pinout scrambled instead of having each diff. pair in sequence ?
2
Why ground is positive on this part?
3
Why does a Category 5 rated jack have different solder tail positions than a traditional jack?
4
Why does Ethernet on UTP have much greater range than other modern protocols?
3
Role of “HDMI Baluns”?
15
What if there are an odd number of twists in a twisted pair cable?
1
What can cause an oscillator output voltage to go higher than expected?
0
Why this evaluation board use different track impedance than the right one? Ethernet PHY, routing
1
Why MII interface needs two clock TXCLK and RXCLK where as RMII needs only one clock REFCLK