How to send out 60khz signal from antenna?

In Japan there are radio-controlled clocks. Time is synchronized by 40khz (in west Japan) and 60khz (in east Japan) radio, which is broadcast from transmission towers. The signal is known as JJY:

I am from Hong Kong. I have a radio-controlled watch and clock bought from Japan. I want my devices to be synchronized. There are iOS and Android app JJY-simulators. I have tried some of them. This one works well:

The principle behind is, using time from NTP server, emulating the JJY signal, sending out through 3.5mm audio port. 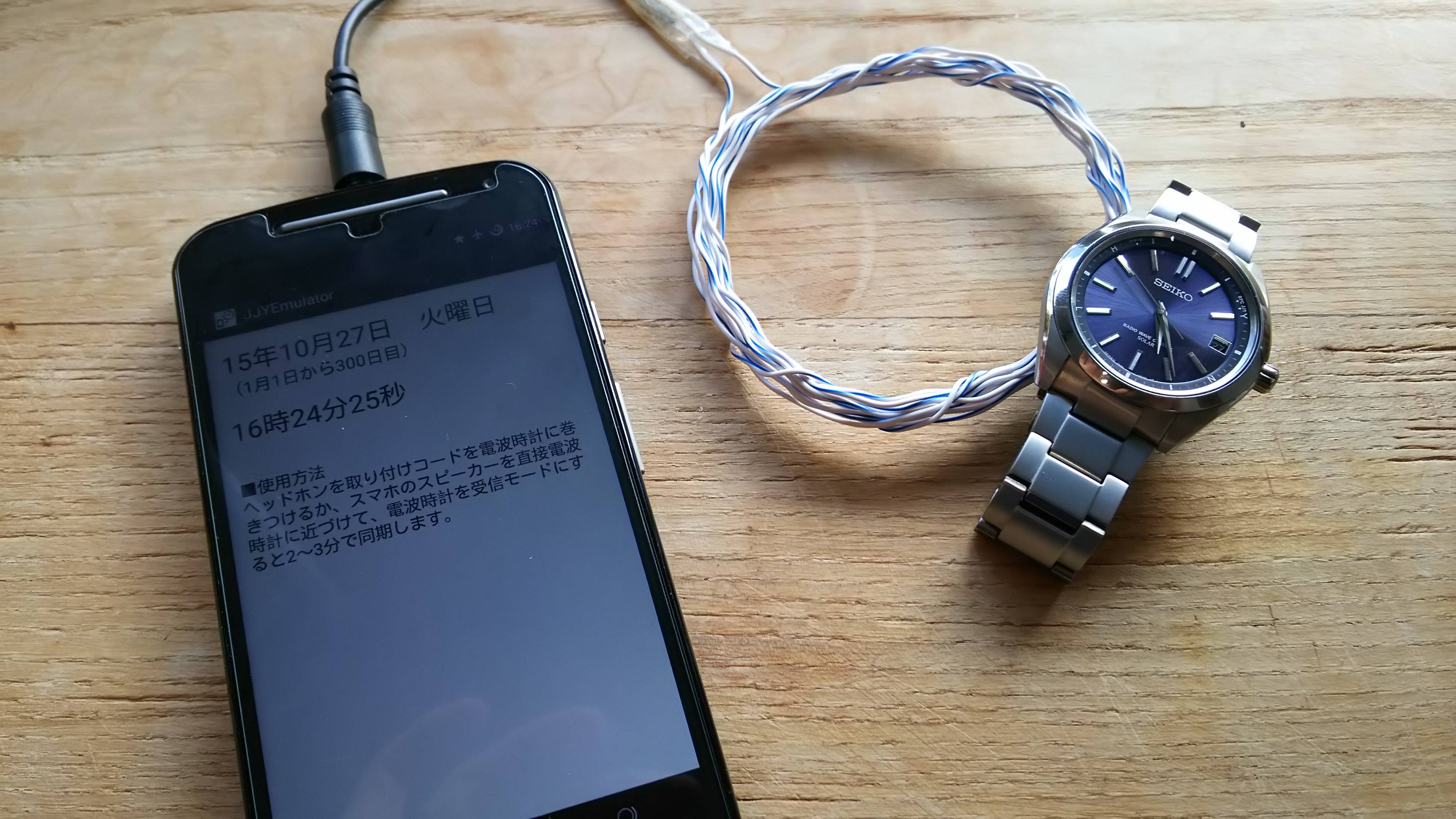 Now I want to implement the emulator on a Raspberry-Pi. There are some tutorials found on the Internet. Below is the one I am following to:

Instead of the source-code in the tutorial, I use this one: https://github.com/snt/rpi_jjy_server

I have made the circuit following the tutorial: 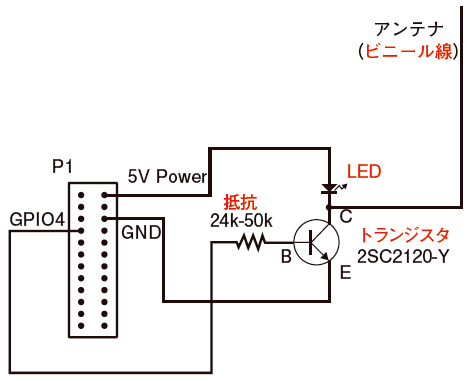 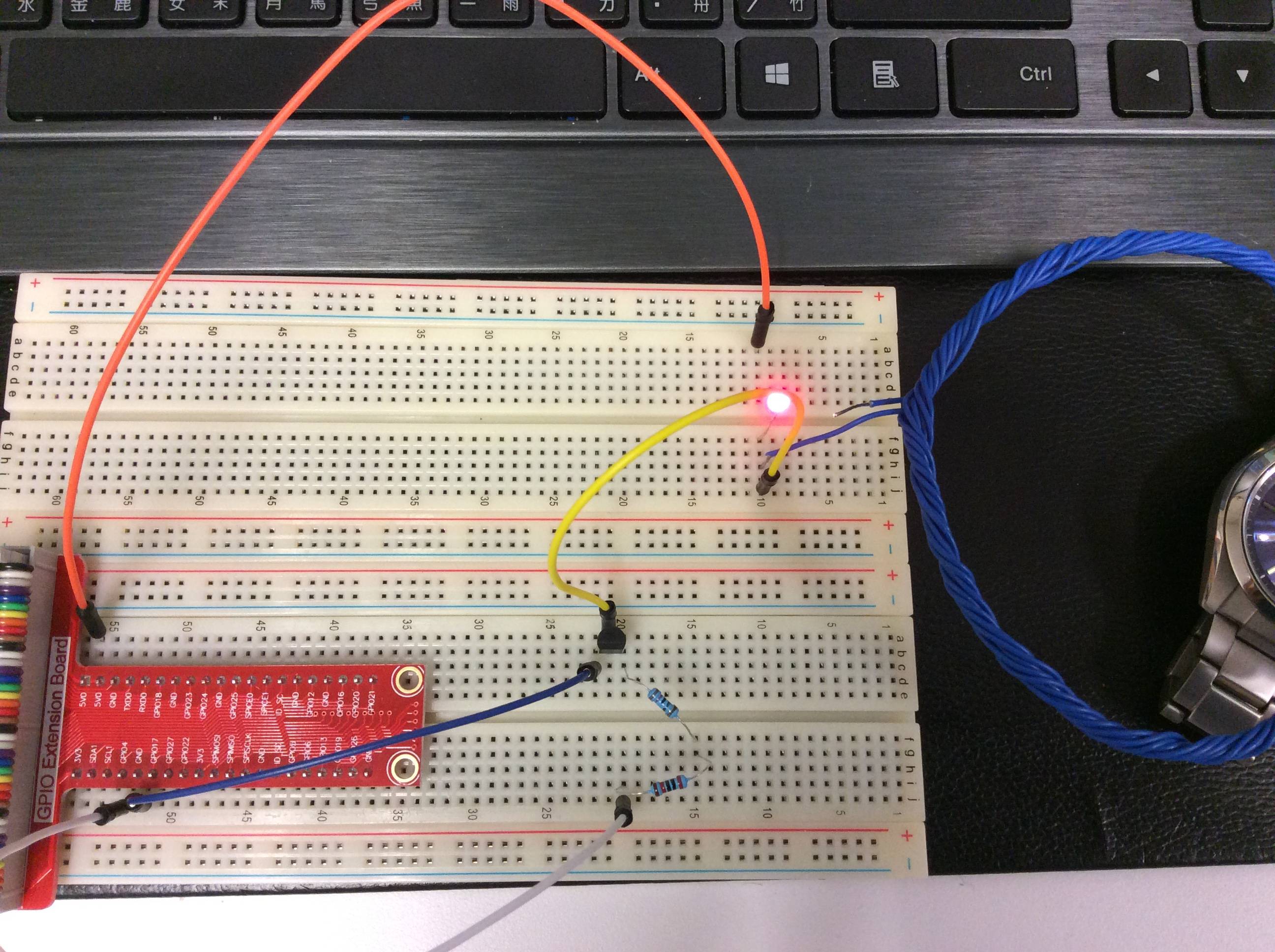 However, most of the time my watch does not read any signal. If there is signal, the signal status is "low", and eventually the time-sync is failed. (For the Android-app one, my watch can read a "high" signal.)

Note: I am using Toshiba 2SC1815-GR transistor, 30k ohm resistors, which are suggested in the Git-hub article. And a telephone-line made antenna. 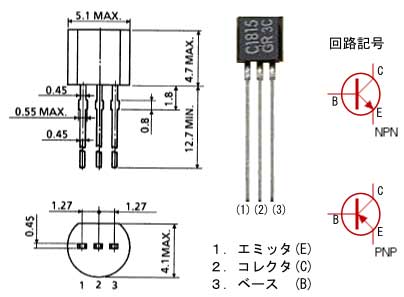 I have tried using a 9V battery replacing the 5V Raspberry-Pi power source. But it does not help.

My knowledge on electronic is very limited. Please kindly forgive me if I have asked silly questions or made silly mistakes. Could anyone please point out if I am made anything wrongly? Or, by what means could I boost the signal from the antenna?

Great appreciation for any help!

"Actually does the antenna really work with only one end connected onto the breadboard?" No, not this type of antenna. What you have is a loop antenna and it creates a magnetic field. You're now using it as if it is an electrical antenna and that would work IF it was very long, for 60 kHz we're talking 1250 meters (!!!) and not rolled up like yours.

I suggest you connect the open end of the antenna to +5 V BUT to limit the current, use a series resistor of value 1 kohm or so.

If you build this then I think there's a good chance it will work. Note how the Antenna is a coil (long wire with many turns) and both ends of the wire are connected ! 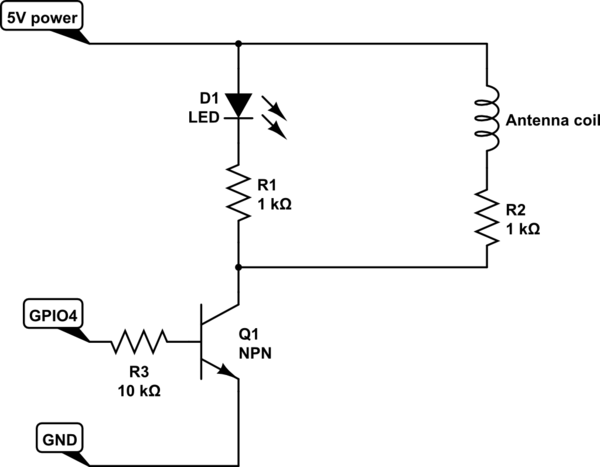 Not the answer you're looking for? Browse other questions tagged transistors raspberry-pi antenna radio npn or ask your own question.

2
How can I best fake an (AM radio) antenna signal?
1
Send action signal via radio using energy generated by piezo
4
How is the minimum reasonable distance for the far field of a dipole antenna calculated?
1
How does a LM386 audio amplifier become to a radio receiver?
1
Two TVs use the same antenna, but one affects the other
0
How do metal pipes amplify radio time signal?
5
Ferrite rod antenna for DCF77 simulator
0
How do I send a signal from my computer to my USB antenna