I am trying to use a DAC8571 (datasheet) and I'm trying to set up a communication between this convertor and an Arduino Mega via I2C.

The communication between the Arduino and my computer is done using LabView and LINX VIs (MakerHub).

My I2C communication is already working between a sensor and the Arduino Mega and I just would like to add the DAC. The problem is that the DAC does not react at all when I write on the I2C with the Arduino.

My first worry is that the DAC is not working at all (could I have broken it with the heat while soldering?). I have two of them and I am testing them on a breadboard. When I connect them (pin1 = 5V, pint2 = 5V, pin3 = not connected, pin4 = voltmeter, pin8=gnd, pin7,6 = I2C with 10k pull-ups, A0 = gnd), no one gives 0V at the output as I would expect and they give different outputs (I guess at least one of them is broken). Is there a way to test the DAC without using the I2C communication? I want to avoid the I2C communication because maybe the mistake is there.

Just for additional information I add the VI I used to test the DAC: 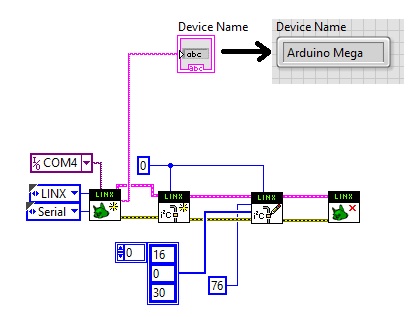 I have tried both my DAC and they both react in the same way with respect to the I2C, but one has a fixed output at about 0.5V and the other at 5V.

Not that I'm aware of, however an alternative solution to debug this is to use an oscilloscope or logic analyzer to check the binary message's Ack bit to see if there's a handshake, bit 9 on SCL signal.

If it doesn't acknowledge, then you either

If it does acknowledge then you either

You should read the datasheet. It's clear that the DAC responds to the uC, however it's not clear based on what you've given to us whether your set of exchanged messaged with the DAC is appropriate, and it looks like it's a set of bytes that need to be exchanged for a single command.

On top of that, you need to ensure the rest of settings are set to the appropriate application, like power mode, scaling of voltage, etc...

Not the answer you're looking for? Browse other questions tagged integrated-circuit i2c dac or ask your own question.