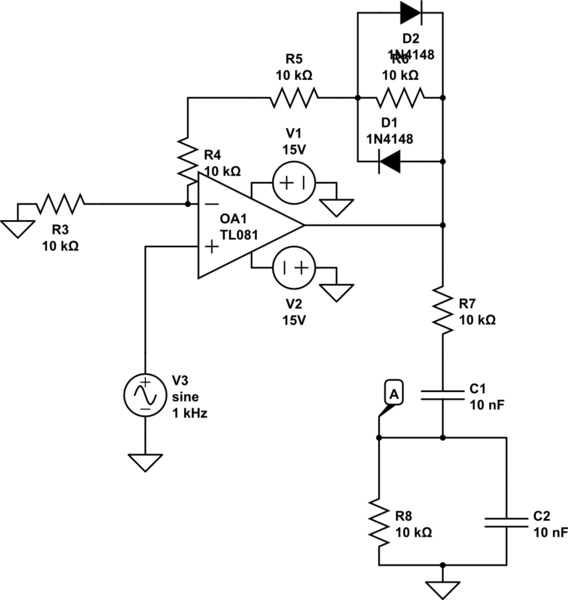 I would check that in the Wien bridge sinusoidal oscillator the gain A_V=1+(R5+R4)/R3) is actually A_V=3 as the Barkhausen stability criterion requires. So I build this circuit whit a potentiometer of 10k instead of R4 and I obtain that for R4=6.38K (so R3 becomes 13.7k) the oscillation starts. With this configuration the circuit should have a gain A_V=2.2 (with the formula mentioned before)but I observe a gain of 2.9-3. How can I consider the contribution of the diods to the gain formula?

The gain you measure depends on the amplitude of the signal in this circuit. This is the function of the diodes.

For example, if the output signal amplitude is small (say less than 0.6 V), then neither of the diodes across the resistor (R6 ? -- it's hidden) will conduct, and your gain will be 4x (with the 10k resistors). When the amplitude exceeds about 2.4 V peak, then at the extremes of the sinusoidal output, the diodes will conduct, and effectively limit the voltage across R6 to about 0.6 V. This reduces the gain beyond this amplitude to 3x (the other resistors control it).

If you were to draw a graph, the gain (slope of VOUT vs. VIN) would be 4x until the peaks reached 2.4 V, then would reduce to 3x for the portion of signal beyond that. Because gain changes with signal amplitude, you would get distortion.

This is the exact purpose of the diodes in this circuit -- they allow the gain to change, and if you get the resistors (and other components) right, for small signal amplitudes the overall lop gain will be just greater than 1, and oscillations will build up. However, when the amplitude reaches about 2.4 V, the gain will fall, and the amplitude will stabilize around where the 'average' gain is 1.0

Not the answer you're looking for? Browse other questions tagged operational-amplifier diodes oscillator gain wien-bridge or ask your own question.