I'm having trouble with TC4421A MOSFET drivers in a new PWM DC Heater design blowing. The 12V power supply used during testing is capable of 25A. While doing my initial testing, I started off with higher value load resistors with a 5 kHz PWM duty cycle of 25%. I successfully tested the design at up to 4A. That's when the TC4421A driver failed and literally caught fire. The MOSFET was not damaged. The PWM is generated by a PIC with a Vdd of 5V. My test setup had approx 2 feet of wire connecting the dc supply. Not the most ideal setup, but I didn't expect the driver to fail. The P-Chan MOSFET is rated at 80A and the driver is rated at 9A peak. Also, the 100 ohm gate resistor was not damaged nor was the PIC. I'm hesitating with any further testing until I at least make some attempt to keep the driver from blowing up. My ultimate goal is to be able to deliver up to 100W into a resistive load by varying the PWM duty cycle.

Thanks in advance for any advice. 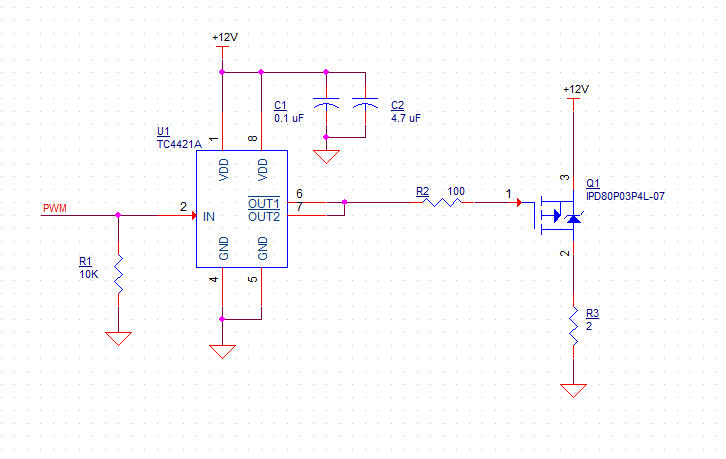 Quite possibly it's the two feet of wire that is forming an inductor of somewhere between 100nH and a couple of uH depending how your wire is laid across the bench.

With a pulse of 4A and 1uH the stored energy is 8 uJ and if this was dumped into the 4.7 uF capacitor when the load was turned off, the terminal voltage would rise a couple of volts BUT if the capacitor were an electrolytic with maybe an ESR of one ohm you could be starting to see voltages on the line to the chip that destroy it. The TC4421 has 20V as its maximum supply voltage.

Try twisting the power wires together and maybe also try increasing the capacitance.

Looking at your circuit, you have a 2 ohm load so the peak currents would be 6A and this of course means more voltage on the 4u7 capacitor so that would be more like a 3V glitch on the supply taking it to 15 volts. It's getting close! Each time the voltage gets bigger the current taken by the load gets bigger and maybe there is some point when this spirals out of control?

My first test was with a short across the 100 ohm gate resistor with the though that the relatively high gate capacitance might keep the driver from switching the MOSFET fast enough. That test ended up blowing both the MOSFET and the driver.

The MOSFET in your schematic is rated at 16V gate-source voltage max: - 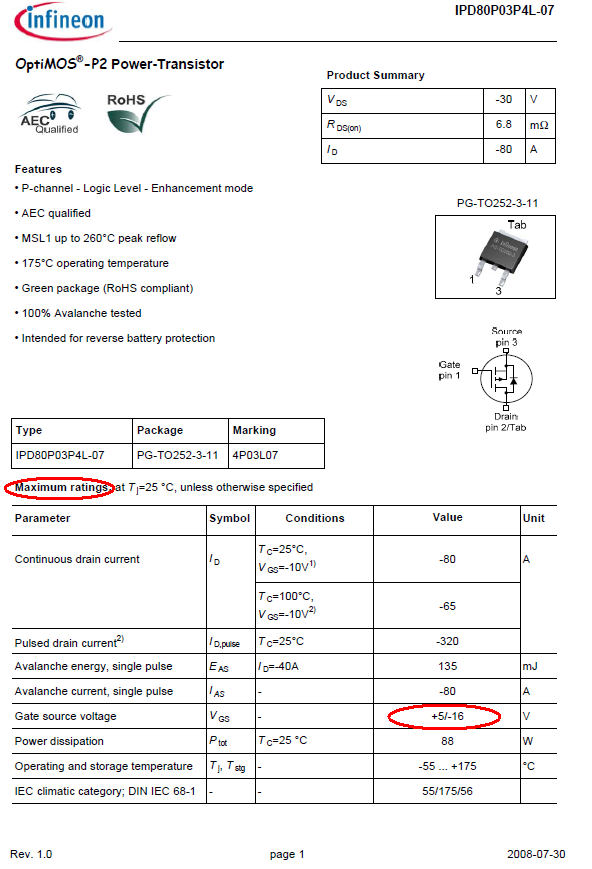 With the ringing and glitching as I've explained above, this is the likely failure mechanism for the MOSFET - puncturing the gate through to the source will be also pretty fatal for the driver too.

OK, so to keep from roasting any more TC4421 drivers, I dialed down the 12V supply to 10V. Keep in mind this is a 350W switcher. In the scope trace below, the top (blue) trace is the load resistor which is now 1.5 Ohms, the lower (yellow) trace is the 10V supply measured at the PCB which is 8" (18AWG) from the supply. The FET turns on immediately, but dips about 35V below ground with 10-15 uSec of ringing. The PWM is running at 5 kHz at about 15% duty or about 1.5V average to the load resistor. The average current is only about 1A so the FET is loafing and should be fairly cool. The 80A FET is starting to get pretty hot which I'm sure is due to the turn off behavior. The 2 uS 5V bump in the supply line is probably due to the switching supply reacting to the load dump. I don't really need to run the PWM so fast since I'm just heating up a resistive load and may reduce the frequency to 100 Hz or so. This won't help the MOSFET turn off behavior which is my current concern due to the overheating. In the end, I will be drawing over 10A at max power to the heater. The heater will not be run continuously, but will be on for at least 15-20 sec at a time with about two minutes between so the duty will be around 15%. I'm pretty sure the MOSFET won't survive this given that it's getting hot with only a short 1A load. From the Microchip data sheet:

These devices are essentially immune to any form of upset, except direct overvoltage or over-dissipation. They cannot be latched under any conditions within their power and voltage ratings. These parts are not subject to damage or improper operation when up to 5V of ground bounce is present on their ground terminals. They can accept, without damage or logic upset, more than 1A inductive current of either polarity being forced back into their outputs. In addition, all terminals are fully protected against up to 4 kV of electrostatic discharge.

Are you sure you wired it up correctly ? Do you have a genuine TC4421A ?

Not the answer you're looking for? Browse other questions tagged mosfet driver or ask your own question.

4
Why is the MOSFET driver in this circuit dying?
3
Simplest design approach for PWM control with power MOSFET
0
Hot MOSFET DC-DC Boost Converter
13
Voltage spikes when driving DC motor with N-channel MOSFET
2
TC426 Mosfet drivers keeps blowing out
3
What could cause the mosfet to burn out in my motor driver?
1
Issue with driving Brushless Motor with a MOSFET Driver
3
MOSFET failure (RN6020JNZ4) - all pins shorted