Is this a viable Voltage Regulator design?

Based on that information, I was going to attempt to use an LM317 to regulate the 12V DC down to 5V DC for the Raspberry Pi. I want to validate a few things. 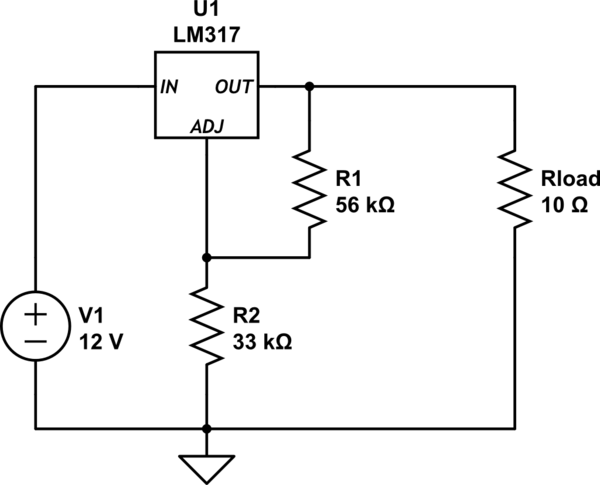 The results of the simulation are below:

Calculations for selected values of R2

Buy a decent car usb charger. It will (most likely) be a complete 12V to 5V switching regulator, with filtering caps and everything. Better efficiency compared to a linear reg like the LM317.

That said, the USB Enclosure will typically have it's only 12V to 5V regulator to power the Hard Drive's 5V rail, so you shouldn't need to calculate for that.

I'll try to go in order of your questions:

1) Not really. For DC voltage regulation, you're sort of limited to linear regulators for low-power applications, and switching regulators for high-power applications, or where efficiency matters. The LM317 is only $0.45, so I can see the appeal, but if you aren't budget limited, you could check out smaller switching regulators, such as the TRS1-2450. It's easily found online (such as Adafruit). You can see a datasheet here. It's internally limited to ~2.5A, but I doubt you'd ever really use more than 1A with an RPi.

2) With a linear regulator, yes you did the calculation correctly. A linear regulator "burns-off" the voltage overhead (7V when going from 12V to 5V), but the current through the regulator is (largely) conserved from the input to output side. The LM314 has an adjustment pin that makes it slightly different, but counting µA is pointless here.

The second and third parts of your question are related. The RPi is probably better modeled as an active load. The voltage across it will always be (close to) 5V, but the current through it will vary, so a variable resistor is a better model. For this case, check out typical consumption for the RPi. It's typically around 500mA, and a couple GPIOs won't change that much. I doubt you'd ever go much higher than an amp, unless you're doing some serious bitcoin hashing on an RPi cluster.

3) Let's assume a steady-state current output from the LM317 of .75A. With a 12V input and a 5V output, you get a power dissipation of

In the worse case scenario of a 1.2A continuous draw, it goes up to 8.4W. You could check out this guide on linear regulator power considerations, but for over ~2.5W, I'd recommend a heatsink. They're about $1 and a ton of insurance. The LM317 has a thermal overload shutdown, just in case, so if you see brownouts, that might be the cause. Also, according to the datasheet, the max dissipative power is 20W. For the TRS switching regulator, you should be fine, since it's far more efficient (>84%).

4) I wouldn't worry too much here. Think about it this way. The RPi will consume ~500mA, so if the voltage divider consumes even 5mA (so resistor values of 1K from the 5V source), it's only 1% of the consumption of the RPi. Anything larger minimizes this even more.

However, the Iadj pin is actually quite important. Looking at the given equation:

We can see that the value of Iadj and R2 can change the output voltage regulation. First, looking at the datasheet, Iadj can vary from anywhere between 0 (no minimum stated, but unlikely a negative value) to 100µA. You could use a trimpot here instead of two resistors, and with a DMM, calibrate the system under load so it provides exactly 5V down to some arbitrary precision. Alternatively, we can recognize that if we can tolerate ±5% variance (.25V according to this post), then R2 * Iadj shouldn't allow for more than a 500mV difference (5.25 - 4.75). Calculating R2's maximum value then:

So now we can place some safe bounds using the guideline values for R2. We probably don't want it too much lower than 1K, and maybe not higher than 5k (unless calibrated with a trimpot). 4.7K is a convenient value in the standard series, but check out what standard values work for R1 as well so that R2 / R1 satisfies the equation adequately. Also, keep two things in mind: First, the typical application circuits are generally a pretty good starting point, and may likely work best for you. Professional engineers spent a decent amount of time making them, so gain whatever insight you can from them. Second, standard resistors have, IIRC, a limit of 10% deviation from their nominal value. Again, another argument in favor of trimpot + calibration.

4) Simulation is probably fine. The best way to check would be to build it (literally less than $1 for the whole thing) and check it with a multimeter. You can simulate the RPi load with, as you suggested, a couple resistors that simulate the current loads you expect.

Hopefully this helps with designing the regulator!

Not the answer you're looking for? Browse other questions tagged power-supply voltage-regulator low-power or ask your own question.

4
Simple LM317 variable voltage supply, does it limit current too?
3
Connecting several power regulators to a single voltage input
2
Time response of LM317 used as current regulator?
1
LM317 Voltage Regulator + ammeter = firecracker?
0
Potentiometer with No Minimum Resistance
0
Are these 12v power supplies worth using? Is additional circuitry needed to drop voltage to meet USB standards?
0
How do I switch on after the current (out of a power supply) has established?
1
Linear voltage regulator with a solar panel?
0
Voltage regulator - unexpected voltage drop, is this normal?