Why are there only RGB and RGBW-LEDs, but none with more chips inside one housing?

In another thread the question emerged, where the LEDs with 5 or more dies of different colours are. (Kudos to Brian Drummond) The background is as follows:

RGB LEDs are very popular for creating colourful lighting effects. In fact, due to the three receptor types in the human eye virtually every possible colour we can perceive can be produced with a red, a green and a blue LED although the LEDs can produce only a very delimited section of the visible spectrum. With three colours it is even possible, provided a perfect mixture ratio, to produce a light perceived as a pure white. The human vision cannot recognise different light sources if they excite the three colour sensing cones in the eye at the same levels. This effect is called metamerism.

However the human can very well perceive the quality of light sources when light is being reflected by coloured surfaces or objects. Because the reflection of light on coloured surfaces is effectively a multiplication of the light spectrum with the remission spectrum of pigments. The remitted spectrum differs vastly for different sources of white light.

To cut a long story short: White light from RGB-LEDs is a mess. If you try to use it for general illumination purposes, colours of artwork are reduced to a greyish mélange and human skin looks like beeing afloat in a quarry pond for a week.

While there are some LEDs with a white chip and three colour chips in one housing, those usually tend not to address a better colour rendering but to have a higher luminous flux at white light.

So the question with some additional words is:

Why are there no multichip LEDs (5 or more chips) for the production of light with higher colour rendering?

An answer to this question consists of two parts. The first is a question itself.

What is the use of a multichip LED in a common housing?

The purpose of incorporating red, green and blue chips in a common LED housing is to generate a light source capable of producing any colour from apparently one pixel. This is necessary in two cases:

For the latter purpose, usually COB light engines are produced, because an SMT housing as used for most RGB LED has only limited capabilities to shovel away the thermal power.

Higher color rendering in contrast is needed when illuminating a bigger surface. Only when a significant flux is used to more or less homogeneously illuminate objects or surfaces with distinct and varying colours. Different colours reflecting white light require a light source with a high colour rendering index to be displayed, such as daylight or incandescent light.

What is needed to produce white light with increased colour rendering?

To produce a light usable for general illumination a higher etendue is required anyway, because one usually wants a homogeneous illumination with no hard shadows. I.e. the light for GI must be mixed and diffused anyway, so one can use single chip housings, too. This opens the possibility for an OEM to select the chips he needs individually.

But why is it not possible to find the most useful combination of chips to put them into a common housing?

The degree of freedom grows exponentially with an increasing number of LEDs. For each chip you add you have to select a binning with a dominant wavelength and a flux binning. Furthermore there are a bunch of other parameters associated with each die to select for a common housing many of which are temperature dependent.

Now let's imagine an LED-producing company has spent a considerable amount of time to build a 6-die housing which can produce a white light at 4000K with all R-values (1-14) above 90. The first complaint the manufacturer will hear is: "Why can't I get the same φ for pure red as I get for white? It is not possible to go through the complete gamut with a usable flux!" The second is perhaps: "I only need white at 2700 K and some of the other colours. Why do I have to pay for an additional deep blue chip I do not really need?"

A LED housing accommodating more monochromatic dies than necesseray to generate independent tristimulus values is like a swiss army knife with \$8^n\$ tools. But you do not carry this LED in your pocket to freely synthesize a spectrum anywhere you go. An LED will always be mounted on a PCB to fulfill a specific purpose. You would not have a Swiss army knife in your kitchen in a drawer to cut ham.

So what do they use then to produce light with higher colour rendering?

An economic way to get light with higher colour rendering is to use a white LED chip (essentially a blue or ultraviolet LED chip coated with chemicals to convert blue light into a continuos mixture of green, yellow and red light). Due to the small amount of phosphorous substances needed to build white LEDs it is economically possible to use high quality substances which produce white light with a CRI of 90 (R1-R8) from the start. Two chips with different CCT (correlated colour temperature) can be used to create arbitrary colour temperatures for so called "tunable white" while maintaining a high colour rendering.

To reach even higher light qualities one would add colour LED chips, but not the ubiquitous red, green and blue ones, because their spectrum is already part of the spectrum of the white ones. To reach a higher colour rendering one must close the gaps in the spectrum left by the white LEDs. These gaps are the cyan dent and the far red slope. To fill them, you need cyan LEDs and far red LEDs. While far red LEDs come with a variety of wavelengths, cyan LEDs are way more difficult to acquire due to epitaxy problems. So most solutions with high colour rendering use a combination of a low energy blue and a high energy green to narrow down the cyan gap.

Apparently it is rather difficult to select a couple of dies for a single purpose. The more problematic is constructing an "universal" 6 or 7-die housing without making it unusable or too expensive for 70% of all possible customers - let alone the thermal problems you run into accumulating so many electrically independent components into one housing.

An alternative view - which in no way contradicts Ariser's answer - is that the marginal costs over RGB or RGBW or simply phosphor-based white LEDs are high enough that the mass market prefers cheaper solutions ... today.

The specialist market - perhaps those who regard a CRI of 90 as a bare minimum or insist on taking things outdoors to see what they really look like - may adopt custom solutions, whatever the cost.

But if prices for cyan LEDs fall, (the way blue LEDs are no longer £10 each) or other technologies reduce the marginal costs, it may happen simply because there's no cost saving from an inferior solution.

RGBWA devices do exist. They're widely available for LED stage lighting, precisely because it solves the problem of getting a "warm white".

Of course the fact that the packages are less popular and more expensive to make than RGB or RGBW means that fixtures using these are more expensive. As with most things, you pay for quality! Still and all, they're definitely out there.

This LED, which is RGB plus Amber, Cyan, and Lime, is used to improve the Color Rendering Index (CRI) beyond 90. (The following two images taken from here.) 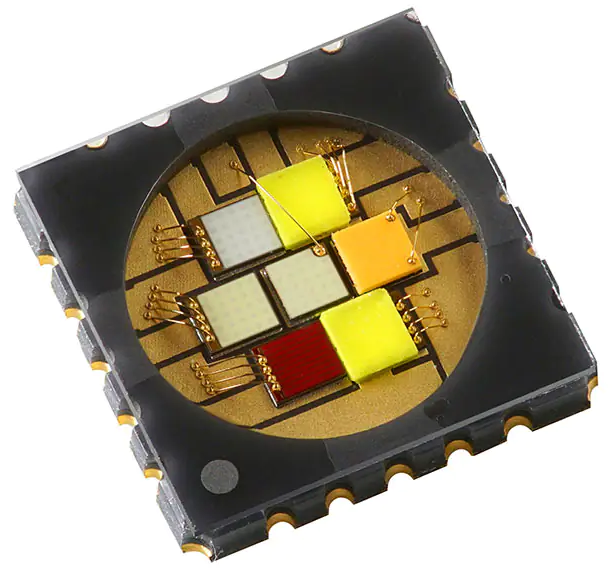 As you can see below, the spectrum is covered nicely by the additional Lime, Cyan, and Amber colors: 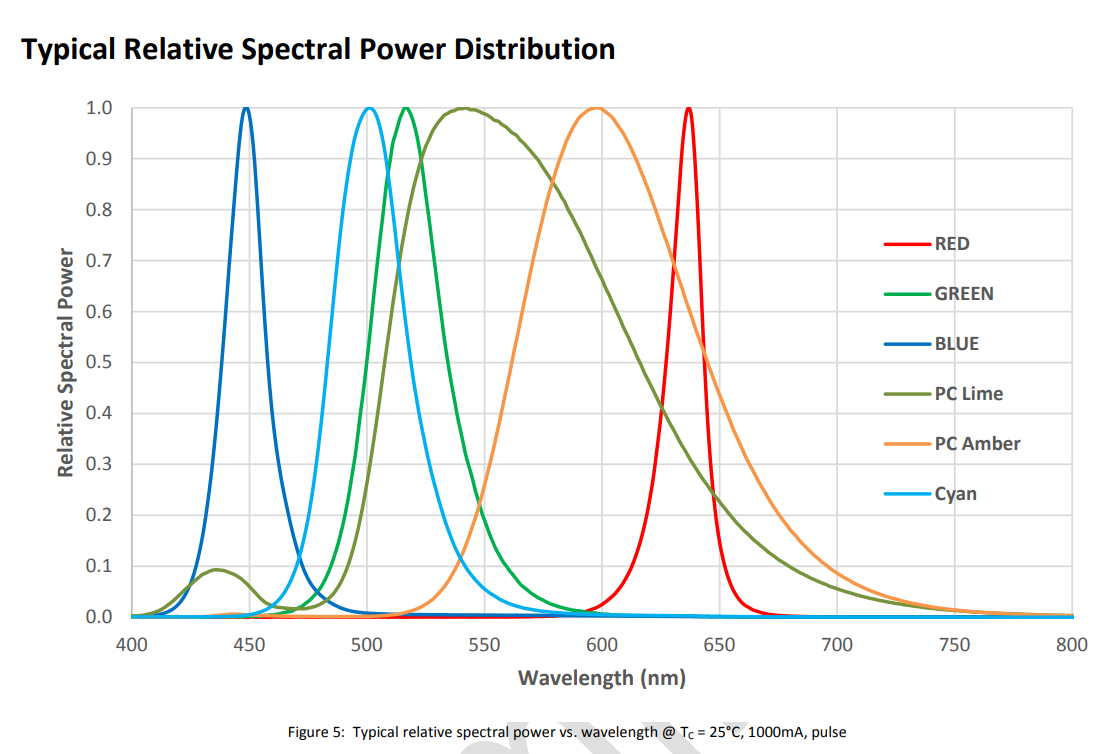 This answer re-spun from my question "What is a lime green LED used for?" and answer "in a 7-die LED to produce a high quality light having a CRI > 90".

1
Why do LEDs have only RGB (Red, Green, Blue) colors why not others?
29
Why are the three component LEDs in an RGB LED so unbalanced?
4
What is a lime green LED used for?
0
Efficiency of green High Power LED compared to efficient white
1
Bi-color LED Intensity + Color Control

3
Colour correcting RGB LEDs - possibly with science
13
6 LEDs in parallel with a single resistor to simplify soldering
3
Common cathode RGB LED Cube: Can/should it be done?
9
Why do Infrared LEDs come with different coloured lenses?
4
Why are there no high efficiency green/cyan phosphor LEDs
1
RGB LED Strip without microcontroller
0
Film over an SMD LED to change its colour?
0
Mixing light from multiple leds