I need to get +15V and -15V in reference with a common, but how can I do this if I only have the former outputs? Maybe I need a rail splitter? If somebody has a simple circuit I would appreciate it.

You need to split your power in halfs. Unfortunately splitting 30V into perfect +/-15V is not possible, because we deal with real world electronics, in stead of ideal ones.

When I said "is not possible" above here, I meant of course "not possible with linear electronics". As other answers show, it is possible, but switching regulators to invert the power will inject more noise onto both rails and since you specified nothing at all, I assumed you wanted the noiselessness available in good bench supplies. If you don't care go for switching! Less heat.

Depending on your power requirement you will need one of many solutions. Because you give no further details, I will just assume that you need more than a few mA, but no more than 1A, because if you need more than 1A, I'm going to go with Daniel and say: Just buy something different or extra. You'll be spending the same money on trickery that you'll then still have to build and is in no way perfect.

So, 1A out, split power, I will give you the benefit of assuming you also want some adjustability, here we go:

First, split the power to make a reference point: 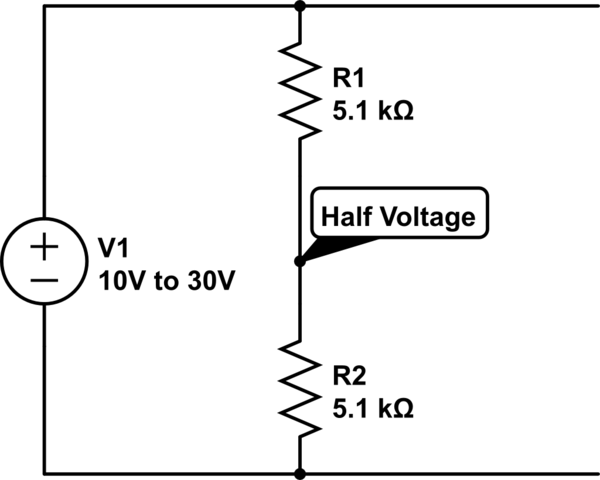 This is a very weak balancing circuit, but does actually allow you to get +15V and -15V, but once you put more than a few μA into the middle they will become unbalanced.

So now you need to "amplify the middle point": 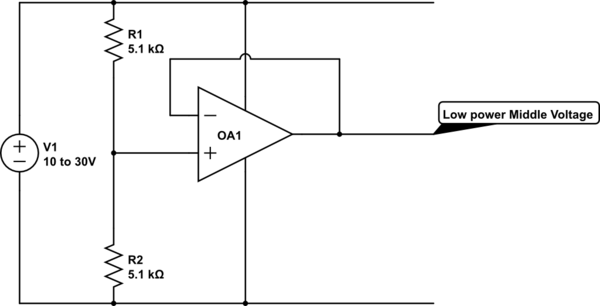 The op-amp wants to keep the voltage on its negative input the same as the positive input when you use it with negative feedback like in this setup. So, it will "mimic" the voltage on the middle of the resistors on its output. Unfortunately the op-amp is not very strong either.

This will only give you about 5mA to 10mA of "middle voltage current capability", which is still super little.

So, how do we fix that? Add transistors: 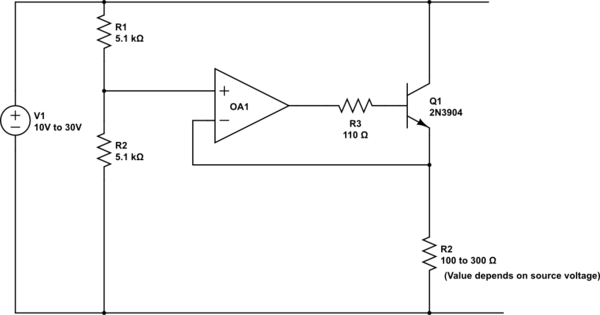 In this design the transistor is set up as an emitter follower inside the feedback loop, which amplifies the current the op-amp can supply. Unfortunately this is only able to source current from the positive rail, so to allow the balance when you want to give or take current, you need the pull-down resistor.

This does mean that a constant 50mA will flow through the resistor and transistor at all times, which means both will get hot. This is in many ways not a perfect solution, but it's the next step.

You want to make that more convenient, so you need to amplify the effect of the op-amp. That means we can build an entire op-amp from transistors, but it's easier to just use two and only build the end-stage capable of up to 1A of current (or more, with proper heatsinking): 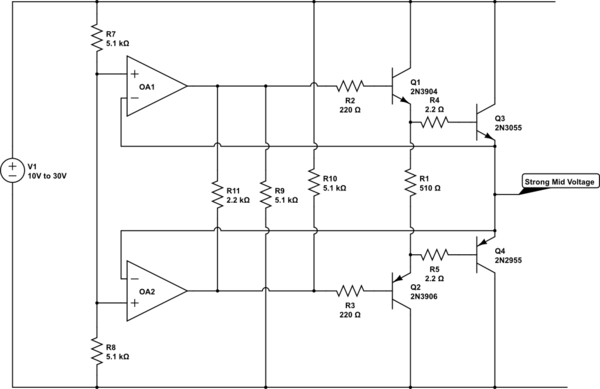 Note: This is purely theoretic based on experience building amplifiers, but remains untested and of course you need to heat-sink the 2N3055 and 2N2955 or they will catch fire. (If you take 1A from the midpoint one of them will waste 15W of energy)

This one works as follows:

When it goes too high, it will do the opposite.

In the negative feedback loop of the op-amps this regulates to the ouput going to half of the supply voltage.

R9 and R10 are 5.1k resistors to assist the op-amps in the closing-off direction. This makes the system slightly more "happy" about stopping current flow through the transistors, than creating it, while the relatively high value guarantees that it's still quick to react to changes in the load.

R1 connects the "pre-amp" stage transistors together, to disallow them to swing too far apart, which I hope is small enough in value (this is one of the untested things) to allow it to react to fast changing loads, without growing highly unstable.

The thing here is, we have two independent op-amps acting on the same output, which is a bit troublesome, so for good measure I added in a 2.2k link between their outputs as well, so that the op-amps can't disagree wildly on the action to be taken without "being punished".

Normally in an audio amplifier all the transistor emitters would be tied together to the negative feedback with large and small resistors, to keep them "in check", but this will make them worse at reacting to quick load changes, so we don't want that here. (An audio amp has a fixed load with a changing input, rather than a changing load with a fixed input).

Reference, in an audio amp, you usually see this (as described above), which would be slower to react to load changes: 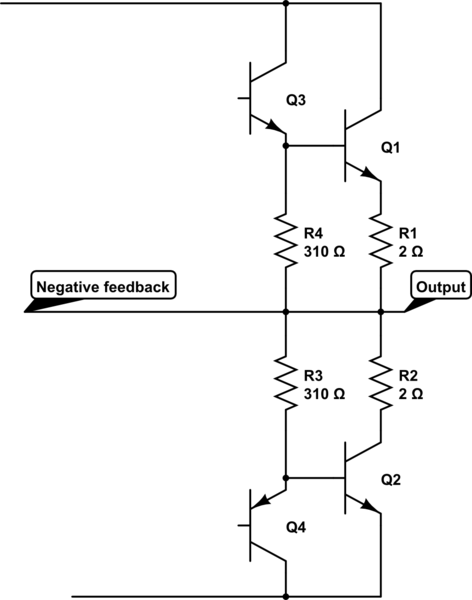 You can use this as well if you have stability problems, it will be more stable for higher capacitance or inductance loads, but for fast changing loads it may well increase effective ground ripple, since initially the extra current helps pull the wrong transistor closed, before the op-amp can act to reverse that. Which is why I decided to wander off the known path of 30W Audio Amps and try something different.

Then if you put 14V on the system, it will divide again into 7V, amplify it, etc.

For very low voltages this will not work, because the transistors need a voltage budget to work with. In this set-up I'd be happily suprised if it manages +/- 2.5V from a 5V source, but you can always try.

What you are trying to do is create a virtual ground. This is done by using a high-current buffer as follows 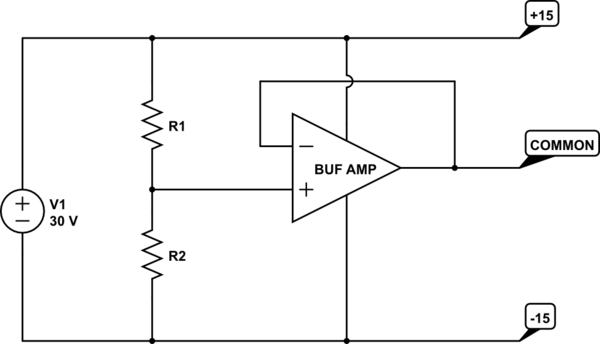 simulate this circuit – Schematic created using CircuitLab If you do this, it is important that you physically mount the 30-volt supply so that its chassis (and ground) is electrically isolated from your circuits. If you do not, the buffer amp will probably fail.

Another idea, that depends on how much current does your application require, is to use a DC/DC converter (switched capacitor converter), capable of inverting its input. The TC962 can tolerate up to 18V in, will provide -Vin on the output terminal, and can supply up to 80 mA. This way you won't need to set your power supply to output 30V, only to 15, and the DC/DC converter will generate the -15.

Another DC/DC converter that will fit is the LTC1144.

Here is a circuit idea that you could develop further. No guarantees made!

My real recommendation is that you spring for a dual-output supply :)

Edit: Updated to connect earth ground of power supply to the ground reference of the circuit.

Yeah I'd look into a rail splitter. I've done this with a power opamp.
See figure 3 here. You'll need a heat sink too, maybe a big one depending on the circuit.

Not the answer you're looking for? Browse other questions tagged power-supply voltage ground or ask your own question.

20
What are the ways to make a dual power supply from a single voltage source?
1
How do I know when an amp has virtual ground?
0
Voltage regulation: I need 2x12V DC from 25V DC