Now, there are several 3-D systems out there in the market. The most popular one is lightboost setup:

As the lightboost released on the market many monitor vendors also released +120 Hz monitors with lightboost support(such as VG248QE the most popular one).

Before I reveal my question, I feel like I have to explain technical details of DVI dual link and LCD driver a little bit. There are some missing parts of them which I could not understand.

This is DVI dual link pinouts:

I found this on the adress: http://www.alciro.org/alciro/conectores_26/conector-DVI-interfaz-visual-digital_269_en.htm

The DVI connector is divided mainly into three areas:

TMDS. (Transition Minimized Differential Signaling) or Transition Minimized Differential Signal similar to communication systems balanced. Marked on the figure by the brown color has four twisted pair cables one for each primary color video red, green and blue. Each two pairs have a mass of specific protection marked in dark brown. The video signal is synchronized with a pair of twisted wires in light brown line has its own mass. With a video link can transmit high-definition HDTV signal (1920 × 1080) at 60 Hz (139 MHz) for better definitions and better refresh the DVI connector includes a second link in combination with the former provides resolutions higher than HDTV HDTV (1920 × 1080) at 85 Hz (2 × 126 MHz) or WQXGA (2560 × 1600) at 60 Hz (2 × 135 MHz), among others. Pug & Play. Marked in blue has a number of lines that highlight the DDC (Display Data Channel), serial connection with pin I2C Bus SDA (data) and SCL (clock). Are used to detect and display settings when connecting to a computer. Analog. Analog system, marked in green features a pin (pin) for each RGB primary color red, green and blue analog sync with the digital connector makes it compatible with the analog system, reaching a bandwidth of 400 MHz 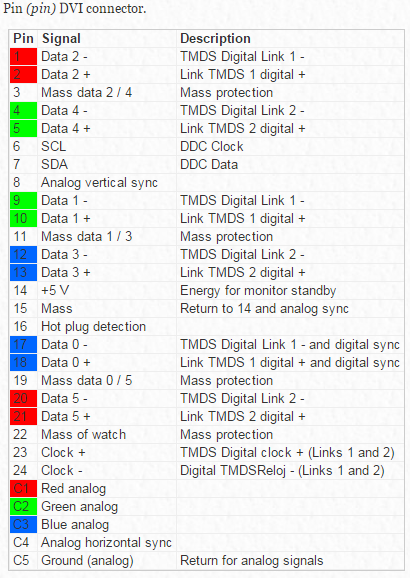 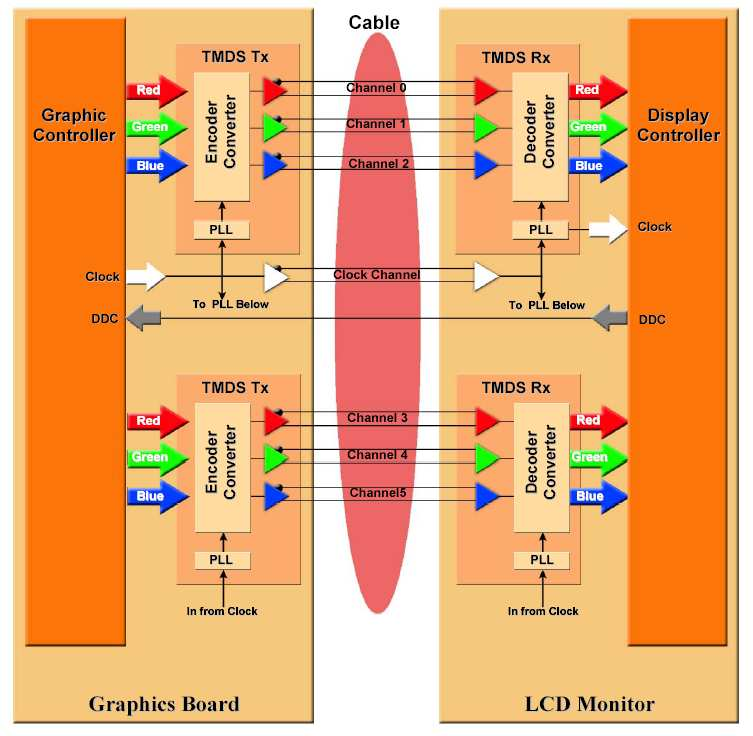 As you see, with DVI, we send datas bit by bit and the LCD driver of the monitor decodes received data. So, my question is this: Why do I need lightboost(Or any other 3-D vision product)? What lightboost(3-D stereo feature of it) actually does? Why don't we just use the same communication with monitor and simply send preconstructed Left and Right pixel datas to the monitor and then it decodes the data and do the same job as in lightboost?

Why do I need 3-D stereo? What 3-D stereo feature does? How it effects the communication between the monitor and the graph card? Are there primarily differences in the hardware structures of graphic cards which have 3-D stereo feature and which don't have? If there are, what are they? I firstly, wonder about these. I could not reach any detailed documentation about the topic.

Secondly, say it has to be done in that way, communication between the monitor and the G.board(via DVI dual link) has to change in 3-D mode. Then why is that?What changes? In what way they manage to switch to 3-D mode? I firstly, want to know the reason for this and secondly, what is the method for this.

Why do I need lightboost(Or any other 3-D vision product)?

You do not need Lightboost or any other 3D product to display 3D content that is visible with shutter glasses.

You can just send alternating right and left fields and as long as you have a way to sync the shutters in the glasses to the corresponding fields, the user will see 3D. (Assuming you do it fast enough!)

Back in the good-old days, we would use the vertical retrace time to alternate the fields by just redrawing the bit-mapped graphics screen. We would send a signal out the audio jack to control the LCD shutters and sync the glasses. Ugly, but it worked!

Heck, the (amazing!) Vectrex displayed stereo 3D images by using a spinning disk with a slot in it. There was a little sensor in the glasses that told the display when the slot was going to be over each eye, and the CPU would then draw the next field just in time for the slot to reveal it.

(It was actually so much cooler than this simplified explanation! It could even do color on a monochrome screen because there were alternating colored filters over the slot in the spinning wheel. One of the greatest hacks I've ever seen!).

What lightboost(3-D stereo feature of it) actually does?

Lightboost is a clever idea to make 3D content viewed though shutter glasses look brighter. Normally when you look at a monitor without glasses, both of your eyes are open and collecting light all the time.

So why not just have the one shutter open at exactly the moment the other closes so there is never a moment when both are closed? While this is the ideal goal, in real life shutters do not open and close instantly and screens to do update instantly. As you reduce the time when both shutters are closed between fields, at some point each eye starts to see images meant for the other eye or intermediate images. This usually looks like blurring.

I think Lightboost also takes advantage of the fact that you can run the back-light at a higher brightness for a short duration than you could run it at continuously.

The net effect is that more light gets from the monitor to your eyes with Lightboost, so the image looks brighter.

Why don't we just use the same communication with monitor and simply send preconstructed Left and Right pixel datas to the monitor and then it decodes the data and do the same job as in lightboost?

You could just send pixel data, but to get Lightboost to pulse exactly when your shutter is open you will need to replicate the protocol, which is non-trivial.

Not the answer you're looking for? Browse other questions tagged lcd display 3d graphics or ask your own question.

2
Recommended LCD interface solution?
4
Debugging initialization of LCD with NT7605 driver
0
How to Monitoring the lines between an Atmega8 and a LCD using Atmega32
1
16x2 LCD display not working with arduino or RaspPi
26
What is this unusual LCD controller technology?
0
How to connect a frame buffer to an LCD monitor through DisplayPort or DVI in an integrated system
1
Why do we need sync pulses in digital (LCD driving) context?
1
Reading info from an LCD display
1
Programming an LCD interface with a ST7066U