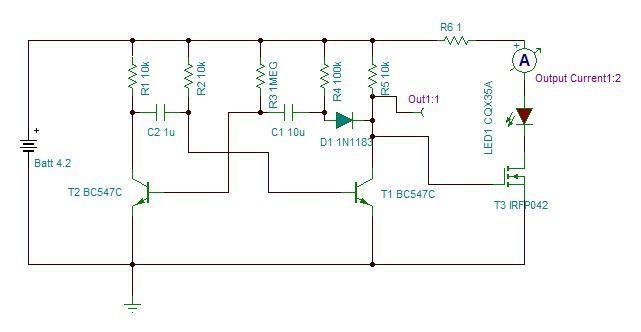 I am designing a beacon light base on this multivibrator circuit. It should give out a burst of very bright light to a 1W led in about 100ms for every few seconds. I have tested this circuit in a breadboard. it worked fine, but I also wanted to add a LDR to it, so that it only operates in the dark. This was the part that I was having trouble with the breadboard. So I tested the circuit in Tina-Ti simulator, and the transient also gave me weird results. I have no idea what went wrong. is there any faults in this circuit? and where should I put this LDR? I have tried putting it in between base of T2 and ground, and it worked for a while. But it totally stopped oscillating when I shine a flashlight on the LDR. 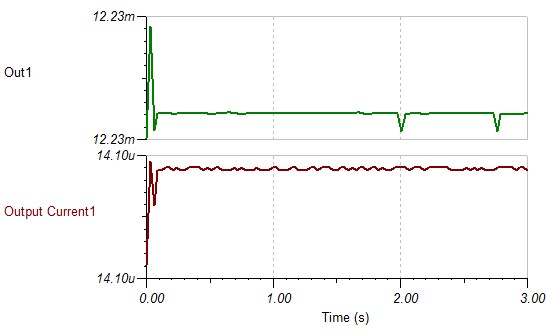 LDRs have have an increased resistance at dark than when there is light reaching them,so you could use a transistor to make it turn on only when there isn't light.Connect a transistor to the supply with the LDR(with the base terminal) and the collector directly to the base of the T3 IRFP042.The emitter pin would go to the negative terminal of the battery.How this would work:When there is light,the LDR will lower its resistance,thus the base current will increase,allowing just enough current to pass in the collector pin to turn the IRFP042 off permanently.When it will be dark,the LDR resistance will increase just enough to deactivate the transistor and allow the IRFP to be switched on by the multivibrator.Use a beta suitable for saturating the transistor

Tina-ti is buggy, or maybe I didn't know how to use it. After testing with tlspice, I have successfully made this circuit works on the simulator and the breadboard the way I wanted it to be.

Not the answer you're looking for? Browse other questions tagged transistors circuit-design or ask your own question.