How to make a boost converter circuit

I've seen multiple different explanations on boost converter circuits, these two specifically explaining in very intimate detail how they work, and on how to calculate certain values:

How to design a boost converter? And how to specify the inductor and capacitor values?

the basic layout of a boost converter looks like this: 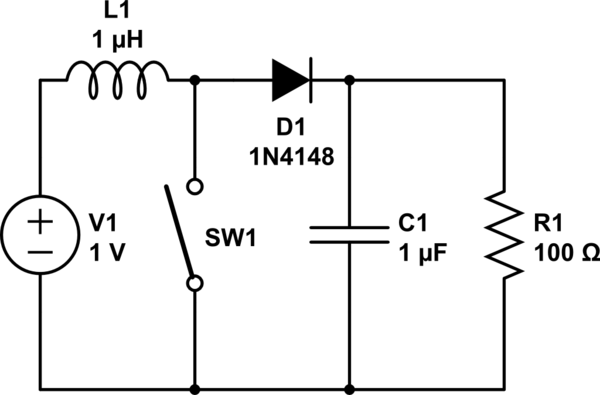 In this example, the 1 volt input would be increased to a higher voltage across the resistor, which would be the load in this case.

I need to switch a 5 volt current on the high side with an NPN switch (for many reasons this is the only switch layout available, no other layout will work as desired), so I need 7 volts to the gate to switch it, however only 5 volts are available. For this I need a boost converter that will convert 5 volts to 7 volts to be able to switch the switch

But, I'm not sure how to calculate any of the values. For example, the solutions in the links I provided use the switching time of the switch, how can I find that? What size inductor and capacitor would I need?

Also as an aside, the thing labelled "L" on the diagram, the inductor, what is it's purpose?

The simplest solution would be to use a small, integrated boost IC. For example here is one from TI, but there are lots of other choices from other vendors as well (The component value choices are clearly explained in the datasheet):

However, you mention you need 2V above your 5V rail to switch your FET. Are you sure that you will be able to turn the FET fully on with 2V VGS? Most FETs have a threshold voltage in the 2V region meaning they are just starting to conduct there. You may want to switch the gate with 5V Vgs or a 10V boosted supply.

If you don't need the FET to be on continuously, and you have a defined minimum off time you may be able to use a bootstrap circuit to generate the gate drive voltage. Without knowing more about what you are doing it's impossible to say if a that would work or not. You might start another thread with more details if you don't know how to make a bootstrap work.

Also as an aside, the thing labelled "L" on the diagram, the inductor, what is it's purpose?

If you have an elastic band stretched across an opening and you pull it down in the middle (to ground) then release it, said elastic band responds by rapidly rising and if you have your hand in the way then you can get a slightly painful little recoil slap. Here's a nice picture to consider: -

You can fire the little object attached to the rubber band quite a distance.

Now that analogy isn't precisely what happens with the inductor but it's near enough to make use of.

So, instead of allowing the elastic band to freely recoil (and waste all the energy you have put into it), imagine you mechanically harvested that recoil to push a little mass/object a little bit higher each time you released the elastic band.

You'd need the mechanical equivalent of a diode so that when the elastic band was pulled down you didn't return the object/mass to ground. That wouldn't be too hard to build but you don't need to build it - you just need to understand the analogy.

So, to get 7V from 5V you need to turn on the transistor for long enough to build up a certain current - that current defines the energy stored in the coil and when that energy is released via the diode and into the capacitor and load, it's enough energy to keep it at 7V and the cap is big enough so that the 7V doesn't droop too much when the inductor is being pulled to ground.

However, the difficulty arises when you try and control the output voltage to a precise value - it is highly load dependent and highly input voltage dependent and so normally what happens is that an op-amp control loop defines the duty cycle of the inductor to prevent too big an output voltage being generated.

May be this is not a direct answer but it gives a simple explanation, using old time experience in boost and buck converters using transformers.

Not the answer you're looking for? Browse other questions tagged boost converter or ask your own question.

6
Understanding Boost Converter
1
How to design a boost converter? And how to specify the inductor and capacitor values?
0
Is this Boost Converter okay?
0
Op amp based DC-DC voltage doubler