Is a microwave's output power proportional to the mass of its contents?

My friend and I are having a heated debate.

On the one hand, he thinks that a microwave oven that is empty, consumes almost no power (not considering lights, lcd, etc). He says that once you put an item in the oven, such as a glass of water, the oven will begin to consume more power as the magnetron must output more energy to heat the contents. Basically, he says that the power consumption of the magnetron in a microwave oven is directly proportional to the mass of heat-absorbing molecules inside the oven.

On the other hand, there is me. I think that the magnetron is always outputting what it's rated for (in an ideal world). I believe that an empty microwave simply dissipates its energy as heat through the chassis. I made the analogy of a radio tower that when transmitting, is always doing so at the same power regardless of the amount of listeners.

Both of us have come up with some interesting arguments, but neither of us are engineers and lack the knowledge to prove our theories.

So we turn to you!

If he's right then the heating time to bring water to boiling point is independent of the quantity of water. One cup will take as long as two.

If you're right two cups of water will take twice as long to boil.

Is a microwave oven's output power proportional to the mass of its contents? No. The magnetron develops a certain electromagnetic field strength (volts per millimeter or however it is measured) just like any radio transmitter. I tried the experiment, measuring power draw for 2 cups water, 4 and 8, it was identical: 1380 Watts for a 700 Watt rated unit. This is about what we would expect taking in to account losses (most radio transmitters are about 50% efficient).

When operating a transmitter, there is a specification called standing wave ratio, which determines how well matched the source is to the load. If the load is perfectly matched, it absorbs the entire output, regardless of how much power that might be. If it is poorly matched, some of the power is "reflected back" and makes an in-phase voltage at the output terminal of the device.

If this reflected power causes the maximum safe voltage of the output device to be exceeded, it will arc over. It is also possible for a mismatched load to draw too much current, so the device will self-destruct by overheating.

In essence, you have X amount of watts coming out, which will either be properly absorbed by a load, or will stress the device (magnetron in this case) and probably damage or destroy it. The output power is unchanged, and the input draw is unchanged. It is like connecting an electric motor to a load: Stall the motor and it might burn out, unload it and it might overspeed and damage itself.

This is true for all forms of radio wave emission.

Addition: All devices have loss as well, so even if "spinning the wheels" it will still draw and waste some energy. In the case of a Class A audio amplifier, this is 50% of the input power. In some systems it is more, in others less. Since a magnetron is not ideal, it is simply going to draw some power no matter what.

So I have finally gotten around to testing this.

Overall, there was a difference of roughly 1 watt between any of the quantities of water, including empty.

A magnetron that heats food produces a frequency of about 2.5 GHz. An antenna is formed within the oven and as per antenna theories, beyond about one wavelength a true electromagnetic wave is generated and real power is produced. One wavelength is about 120mm. This power is done and gone forever so unless there is some kind of reflection up close to the antenna plate I reckon the power taken by the magnetron will be pretty steady whether there's food inside or not. Don't try it at home. 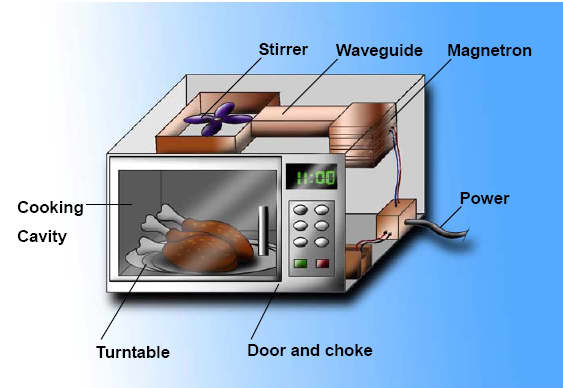 The stirrer distributes the microwaves to a bigger area inside the oven by reflection. Once they have exited this point there is no coming back for any energy reconciliation.

When the oven is turned on, the magnetron emits a transversal elecromagnetic wave into the cavity. As soon the EM wave fills the cavity it begins to hit the walls an reflects back, now the standing wave is formed. In standing wave the E-field and H-field is out of phase by 90 degrees, that means no real power is transfering it just bounces from wall to wall and to the magnetron, where the E-field is exactly in phase and magnitude as the field produced by magnetron, this implies that there is no potential difference and emmiting is blocked.
When there is an item in the cavity, then it bends the standing wave, such that magnetron "sees" the load and additional TEM wave is superimposed to the existing standing wave.
Practicaly the standing wave acts like a conducting channel and "brings" the load connected to the source without wires.

A simple way to get the answer is to place a current reader between the plug and your microwave (example: https://en.wikipedia.org/wiki/Kill_A_Watt#/media/File:P3-Kill-a-watt.jpg)

Then run it empty, then with something in it.

The output of the magnetron must be constant for it to work. However, two cups of water take sqrt(2) times as long to boil- square law. This is due to the surface area.

I know this question is history now but I would like to confirm that the oven consumes the same power whatever is in it.

The opposite has been confirmed. An empty microwave will consume less power than a full one.

In laymans terms. When the Microwave is empty microwaves are reflected back tot he magnetron blocking it from generating more.

The 1st law of thermodynamics comes to mind.

Not the answer you're looking for? Browse other questions tagged heat energy microwave or ask your own question.

0
What is the efficiency of electric power converted to heat?
1
Does the temperature of a processor influence its energy consumption?
6
Power Supply Orientation Affecting Output
7
How strong is the electrical field inside a microwave oven?
0
How to calculate the Temperature rise of PCB and its surrounding air from the power PCB consumes?
7
How can I deduce the power of a capacitor from its datasheet?
0
How does a microwave oven modulate its output power?
0
Where in AC the charge gets its energy again?
0
Why aren't antennas placed at the ceiling of a microwave oven