What is the back voltage generated by this inductor in this practice problem? 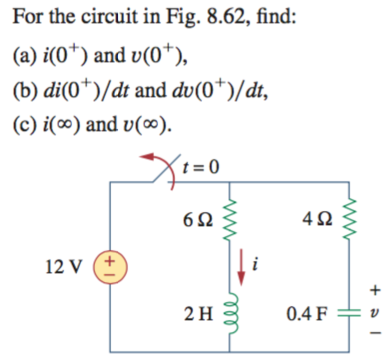 For (b), I need to calculate di/dt at the same instantaneous moment. I can reach that value if I can figure out the back emf (VL) of the conductor. Using Kirchoff's Law on the loop present after the switch is opened, I derive the following equation:

Where VL is the back voltage given off by the inductor, 10(2) is the voltage drop across the two resistors in series, and VC is the voltage across the capacitor. Solving for VL then gives me 32V. It this correct? This seems like an unlikely answer. I believe my signs in my kirchoff equation may be wrong. Can someone check this for me?

But the 4 ohm resistor is there so no spark forms - there is a conventional discharge path for the current. So now the inductor uses the capacitor and 4ohm path for forcing current.

That initial 2A current flows through the 4 ohm resistor and creates a volt drop of 8 volts. The bottom end of the 4 ohm is attached to a capacitor charged at 12V so, the top of the 4 ohm becomes instantly 4 volts.

Given that the 2A also flows through the 6 ohm resistor creating another volt drop of 12 volts means that the voltage at the top of the coil is 12 volts lower than 4 volts i.e. -8V.

Not the answer you're looking for? Browse other questions tagged capacitor inductor passive-networks or ask your own question.

0
Is Faraday's Law not working?
1
Damped RLC Circuit Equation
1
Calculating voltage spike of an inductor
4
Inductor in-rush current
0
KVL on series RCL circuit
2
Inductive kickback
0
Scenarios where Inductor back EMF would result in damage of circuit or component
0
How to find voltage across resistors in RC Circuit with 2 voltage sources?
1
Finding the voltage and current at t = 0 using Step Response