I'm 15 and trying to use an AD9952 DDS in my circuit. Up until now, there has been plenty of help online for the Arduino and corresponding parts. I haven't seen any schematics using the AD9952 and I don't understand the data sheet. I figure if I start with easier devices like the 555 timer, I could build my way up to using the AD9952. Is this an effective method of learning to build circuits and reading data sheets or should I learn another way?

Data sheets will only take you so far. In order to understand how a chip like the AD9952 (a Direct Digital Synthesizer) works you need to know a bit about logic and signal processing as well as some analog electronics.

The basic concept is pretty simple- a number is added onto an accumulator periodically and part of that accumulator is used to index into a table that gives a sinusoidal output. The output goes to a fast DAC, so you get a steppy sine wave coming out of the push-pull current-out terminals. That can drive a transformer or a differential amplifier. External filtering (which the user has to add) makes it into a fairly nice sine wave if it's done right (and the output frequency is much lower than the frequency of addition). Designing the filter is not trivial.

One thing you can do if you really don't see how the part would be used is to seek out evaluation boards- they're designed to allow an engineer to evaluate the part so they will show other components around the part that allow it to be put through its paces. Sometimes the boards are very expensive, sometimes they are sold almost for free to try to get design-ins. In the case of this chip, the board costs $400 US from Analog. They supply Gerber files so you could have one made at a cheap proto PCB place and assemble it yourself (it won't be that cheap if it's a multilayer board, which it probably is). There are Chinese boards available for cheaper, but you should refer to the documentation on the original. Study the schematic and check out the datasheets for the other parts, taking note of anything you don't understand. See also AN-1051 for another application.

Frankly, some of this you will have trouble understanding very well without at least a few years of University level education. That doesn't mean you can't apply the chip using a canned circuit, but if anything goes wrong you'll have a tough time figuring it out.

You can get inexpensive modules based on the AD9850/51 quite cheaply and experiment with those (especially if you have some experience with Arduino or other microcontroller platforms). Some come as kits.

There is a huge step between something like a 555 and a DDS chip- the internal complexity is many orders of magnitude higher, and the 400MSPS internal frequency of the latter means that PCB layout and bypass capacitors become very important- the eval board has more than 30 bypass capacitors, usually 1 or 2 will suffice for a 555.

I would make sure whatever chip you deal with is P/DIP package, so you can stick it on a breadboard for prototyping.

You may want to get your hands on some cheap oscilloscope to measure signals over time.

Simple chips like the op amp or 555 timers, typically come with a set of examples in their datasheets, under section called Typical Applications. Like take this op amp datasheet LMx58-N Low-Power, Dual-Operational Amplifiers which mentions various things you can implement, like a square wave generator 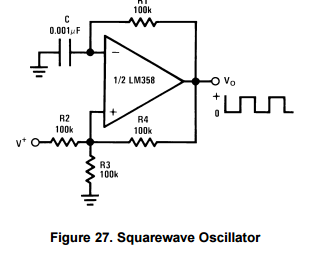 You can also search for existing projects in indestructables for instructions how to implement specific applications, i.e. op-amp headphones

Not the answer you're looking for? Browse other questions tagged arduino microcontroller analog or ask your own question.