I was wanting to get a bulk lot of small LED lights similar to Basic LED - 5mm Yellow. I want to put them in balloons so that the balloons appear to glow in a dark environment, so I have a few questions:

1) The LED would be fine and never produce enough heat to pop the balloon. 2) You could make them into LED throwies. Just a small coin cell batter and an LED.

You could make LED floaties, just an LED taped to a CR2032 3V Lithium coin cell, put inside the balloon before filling it with helium. Supposedly they stay lit 1-2 weeks. The internal resistance of the battery limits the current. 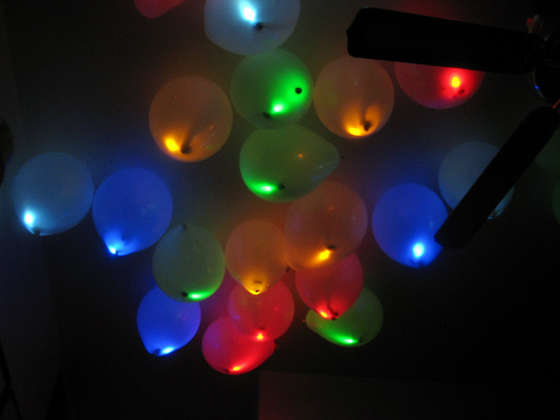 Don't forget the resistor! If you add a resistor, it will last for much longer on a single battery, and is less likely to damage the LED.

Depending on the type of LED, you may or may not need a resistor in a throwie configuration.

I wrote up an article examining some of the subtleties involved in that question; you may want to take a look. (Spoiler: For red or yellow LEDs, DEFINITELY use a resistor.)

For simplicity of construction, get an led that will work on a 3v button cell without a resistor. You can then make a "throwie" that can be constructed with just the led, battery and a bit of tape. It won't make much heat at all, the button cell will have enough internal resistance so it won't act like a short though the led.

The alternative is to cannibalize some Ethernet cabling or old printer cables. Run the cabling up the string or, alternatively, use the cable as the string itself. This means one controller board and power supply can drive the LEDs at the smallest current possible, making the least amount of heat. But really this is much more complicated, just stick some throwies in balloons and inflate them. The only prohibitive thing is the cost of the batteries.

Not the answer you're looking for? Browse other questions tagged led power heat or ask your own question.

6
Automotive circuit works but with lots of heat. Is there a better way?
2
Is this 12 volt LED circuit correct?
4
Can a photodiode distinguish between daylight and white/blue LED?
3
What electronic component can interrupt a powered circuit?
1
Wiring up ATX PSU to power (several) 12V LED strips
6
LEDs have a low glow "noise"
1
How to use YX8122 led driver?
0
What is the best LED driver to use for this setup - Help with WS2815 data amp over long lines