The SS in question is 316, and is only weakly magnetic. Does anyone know whether this is possible?

It's not its magnetic properties that are the problem - it will have induced into it AC eddy currents that will pretty much kill off your magnetic field. I don't think you'd get 1 watt through 1 mm SS let alone 12 mm unless you were operating at 10 Hz (that's hertz not kilo hertz).

EDIT (not related to the question) - you'd be surprised about the odd magnetic properties of "mm sizes" of 316 SS at between 50 kHz and 1 MHz, specifically 300 kHz. Just stuff I've observed when designing food and pharmaceutical metal detectors.

I think you have a reasonable chance of doing this at mains frequency. 316 SS is quite resistive and almost non-magnetic at room temperature so a 60Hz field should easily penetrate 12mm- skin depth at 50 or 60Hz is more than 5cm.

There would be a lot of leakage inductance so the resulting transformer would have a lot of effective series impedance.

I'm visualizing something like an 'pot core' shape turned from iron or magnetically soft steel with the SS wall between the two halves.

This is certainly possible. 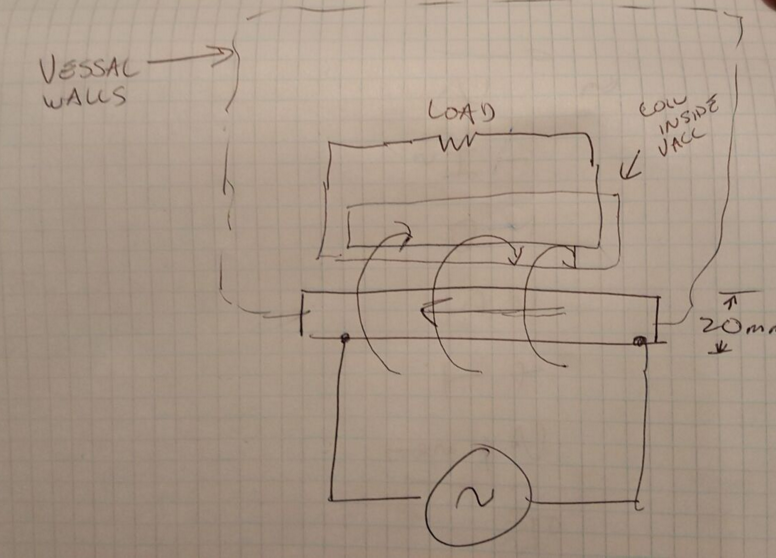 Here I am showing the half of the AC where the current if flowing from left to right across a wall of the vessel (the arrow pointing left). This generates the circular magnetic field lines around the path of the current though the stainless steel wall.

You would position the interior pickup coil so that these circular field lines cut though it as the get bigger and smaller (the coil is parallel with the path of the current in the wall).

You would pick the number of turns for the interior coil based on the volts/amps you need inside the vessel.

Think of it as a transformer where the primary (the stainless) has 1 turn.

If you need DC inside the vacuum, then you'd need to rectify and filter the power coming off the interior coil.

There are many ways you could potentially make this arrangement more practical, but they are dependent on the geometry of your setup.

There is no way you are going to move 1W of power through 12mm of SS, thin sheets are used for EMC shielding for a reason, it is decent at absorbing magnetic fields as well as electric ones.

Can you give more details about the device, maybe there are other methods of power transfer...

Would it be acceptable to replace the connector with a nickel-plated, ferrite/mild-steel 'core?'

If so, you could rabbet-joint & NASA low-gas-epoxy in a small diameter transformer core so that a portion of it sits flush with (or even behind, say, 1-2mm of un-removed SS) the 'device-side' surface, to closely couple the magnetic flux from your exterior coil to the base of your device, where your secondary windings are placed, to receive the power.

If that's not an option, then I guess there's always the "put a 300W electro-magnet on the outside of the SS & deal with the losses" approach. However, I'm guessing that you most likely aren't trying to design an induction cooker that heats your whole SS surface with 299W of power.

Also, while not generally a 'preferred' option, it may be 'feasible' to transfer a small amount of power through 12mm of SS using ultrasound (or other physical vibrations), rather than E/M coupling. This would be a "far from efficient" approach, and 1W would likely be approaching an upper-limit for plausibility, but if all else fails, it could be worth consideration.

Not the answer you're looking for? Browse other questions tagged wireless or ask your own question.