Your question mixes several concepts and needs to be clearer to be sure of being answered well. But:

I will comment on current sources, then current mirrors, then MOS devices.

In practice the ability of a current source to drice an arbitrarily high resistance is limited by the available voltage (as least), so it can be nearly ideal only for a limited range of load resistances.

A current mirror is essentially a current source which is driven by a current input.

eg 1 mA into one "leg" of a current mirror should produce 1 mA in the other "leg" (or some contant vale of this). BUT in practice the current mirror will not be perfect and eg 1mA in may produce 1.002 mA or 0.978 mA or some other value in the other "leg". This will be the equivalent of a non ideal current source in which there is some apparent and non-infinite output resistance.

MOS = "Metal Oxide Semiconductor" is a form of semiconductor manufacturing technology. CMOS ICs use it and MOSFETs. Current sources and current mirrors may be made using it BUT the two are independent.

A vast array of MOS current mirror circuits and some other stuff can be found using this Google trick. Look at the page heading and general environment. All images are hot linked to web pages.

Wikipedia on active loads - relevant to my comments - read and understand.

Photo below - Simple MOSFET based current mirror from here - worth reading. 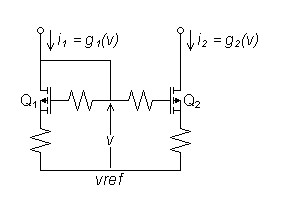 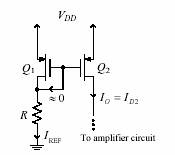 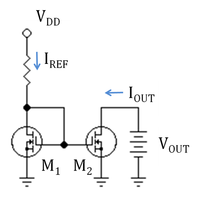 The following is not directly electronics but assist in asking and answering good questions.

Note that you say "ie a MOS current mirror".
"ie" means "that is" = specifically and only.
That may be what you were interested in but usually "eg" is used in this context which meams "one example is" or "here is an example of what I mean".

Not the answer you're looking for? Browse other questions tagged transistors mosfet resistance or ask your own question.