Surge protector helped me discover bad wiring at home — neutral and line swapped; should I be concerned?

I purchased two surge protectors and when I plugged them in at two different receptacles in my apartment, I noticed that the 'grounded' light did not illuminate on any of them.

To shorten the story, I discovered that at every single receptacle in my apartment, line and neutral were swapped! I rewired the two receptacles (just swapping line and neutral) where I am using the surge protector and it lights up all good now.

My question is, given that all the other receptacles are still reversed, should I be concerned? I mean, most devices don't care I would imagine. They just need to see a differential of 120 V. But clearly the surge protector cared, so are there any other devices that do care?

Also, another question. I have a dsl modem with a telephone cable that does not go through the surge protector. My Xbox has its Ethernet cable connected to that dsl modem which also functions as a router. Is it possible that a surge could go through the telephone wire, then through the Ethernet all the way to my Xbox and damage it?

Yes, you should care. The electric code is generally designed so that it takes two independent failures before you get shocked. In you're apartment, one is already used up by the line and neutral being flipped, so you are closer to a dangerous situation. If all else works correctly, this one error shoudn't matter. As Dirty Harry would say:

Do you feel lucky? Well do you, punk?

You don't say where this is, but in most jurisdictions this is a serious matter. I would first politely point out the problem you found to the landlord, and give him a chance to fix it. If you need to convince him, point out how this is a serious liability to him if you or anyone else gets hurt, and that his insurance company may refuse to pay in case of electrical fire.

If he still refuses or tries to tell you it's OK or something, then you should take further action. Talk to your local electrical inspector, and ask if what you found is OK. It won't be. Then tell him you brought this to the attention of the landlord and he refused to do anything about it. Most likely the electrical inspector will now have steam coming out of his ears. He'll take it from there, and the landlord won't like it.

You should absolutely not have changed the wiring yourself. Here in the US, for example, that is illegal for someone who is not a licenced electrician to do, and/or would require a inspection afterwards. You also had no right to do this without the landlord's approval, whether you were fixing something or not. You now own the liability. Don't mention anything about the modifications you made. Only talk to the landord, and electrical inspector if necessary, about the remaining outlets. And don't modify any more wiring.

This is an answer to the second (part of the) question:

Also, another question. I have a dsl modem with a telephone cable that does not go through the surge protector. My Xbox has its Ethernet cable connected to that dsl modem which also functions as a router. Is it possible that a surge could go through the telephone wire, then through the Ethernet all the way to my Xbox and damage it?

In case you have ever opened a DSL modem/router, you would have probably seen something like the second image on this page (this was just a random result from a quick search): 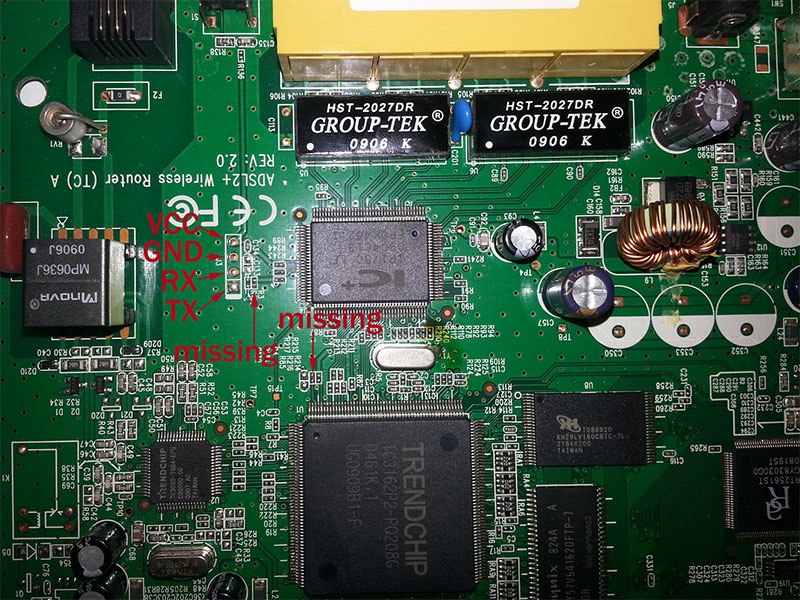 The telephone line entry is at the top left corner of the image. There are two thick traces with a fairly large gap and also some reasonable distance to all other copper on the PCB. Right after the black receptacle, there's a tiny SMD component, which could be a fuse or a zero-ohms resistor used as a fuse. The upright wired component following it should be the surge protector, a similar thing as the one built into the devices you bought. And then the black cube labelled "MP0636J" is a signal transformer. So you have at least a high-voltage suppressor and galvanic isolation between your phone line and the rest of the router electronics. If you connect to it using standard Ethernet, then there is another signal transformer on both ends of the cable, meaning that there is something like triple isolation between the phone line and your computer/Xbox.

Now, what does all this mean? The manufacturers of those devices have already made some effort to protect your devices from surges on the telephone line. I wouldn't expect that to help against a direct lightning strike into the line, though. If your phone line is of the aerial type, there should already be some fairly large lightning protectors right at the entry of the house. The same holds for the mains entry.

The swapped hot and neutral lines are a safety issue. Ideally, the owner would bring in a certified electrician to correct it. Mains power depends on neutral being neutral, as it is also technically an earth ground at the service entry. Polarized plugs are an effort to enforce this for some equipment. Think of the ground plug, when present, as part of a belt and suspenders safety effort for equipment that needs it. A proper neutral is also necessary for many types of equipment.

Lightning strikes can cause potential to come in through any external wires and damage equipment. Most utilities have mitigation systems in place for this, though.

The problem I've had is that most so called surge protectors attenuate the signals too much. At least cheap residential ones.

Polarized plugs: that's when two prong plugs have one that is wider. This is to "key" the electrical hookup so the hot and neutral are known. Open up a two pronged device (like a 10 Amp angle grinder) and the hot lead goes immediately to a switch and there will be plastic covering the entirety of the device.

As supercat comments in jdv's answer:

The biggest danger from swapping hot and neutral stems from the fact that disconnecting and circuit protection devices are generally installed on the hot side only, meaning that if hot and neutral are switched, a device which is "off" will still be live

If there is exposed metal on a 2 pronged device, this metal would need to be shielded from both neutral and from hot, however research needs to be done about how commonplace of a practice this is.

I discovered a piece of equipment had an electrical fault and as R Drast comments, the cables connecting pieces of equipment can end up with line voltage on them. I personally have been shocked this way; instead of full line voltage, there was 63 VAC on the metal shielding of coaxial connections. Everyone had been using this piece of equipment for years and I was the first to notice the tingling when connecting it to the system. We were in a time crunch, so the bad unit was isolated and then disposed of without further investigation.

Yes, it is absolutely essential that you get this corrected. Circuit breakers/fuses will not operate correctly to ensure your safety if the polarity is reversed. You need the whole installation to be checked by a competent electrician. It's a major safety issue.

Not the answer you're looking for? Browse other questions tagged surge-protection or ask your own question.

0
Power strips show fault in some outlets but not others

1
Why sine wave UPS triggering surge protector again and again
1
Hot & neutral have similar voltage to ground: Finding the problem Part 2
1
What kind of protection do these Ethernet “surge protection” diodes provide?
1
Grounding for surge protection for telephone/internet/data lines
0
Using a Main Surge Protector for only branching out other surge protectors
1
Why did these two ethernet switches die (again)?
2
Power line surge on the Active and Neutral line
0
1-2 second home power loss: some circuits stay powered - computer doesn't turn off. How is this possible?