If I derive the equation for a bandpass filter (in this case, critically damped) from the RLC transfer function, I get a different result than I would get otherwise by combining the transfer functions of a highpass and a lowpass filter.

As you can see, the two formulae differ by a factor of two. Which one is correct/why do they not agree?

The first formula you have derived is for this circuit: - 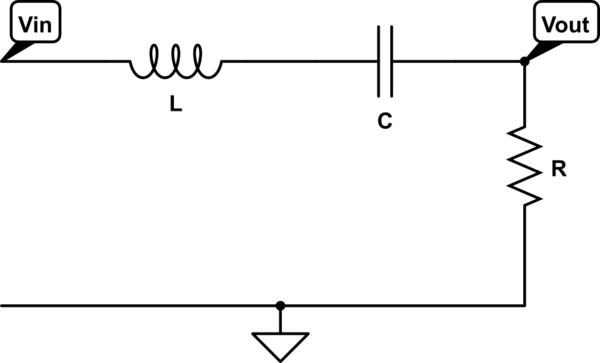 You have then made a mistake in assuming this formula "turns into" a TF that has no zeta (damping ratio). You should have used the standard formula of a bandpass filter to recognize that the TF has terms for both \$\omega\$ and \$\zeta\$ (zeta): -

You cannot equate this circuit to one that has the two cascaded TF's mentioned in the 2nd part of your question.

For a start, to multiply two single order filters together, (like you have) doesn't take into account the interaction between inductor impedance and capacitor impedance - your 2nd method makes the assumption that there is a voltage buffer between the two first order filters and this just isn't present in the series RLC band pass filter.

Another major difference in the 2nd scenario is that it can only produce a critically damped circuit - the middle term in the denominator (\$2\omega_c s\$) has no zeta term at all.

The two scenarios are different.

Not the answer you're looking for? Browse other questions tagged filter transfer-function passive-networks or ask your own question.