Is there any reason why they don't produce LED lights with a spectrum closely matching that of an incandescent bulb. Incandescent bulbs produce a nice warm light, while LEDs (even warm white ones) produce a kind of harsh light.

I think it should be possible to mix several LED dies (maybe 5-10) together to build up a spectrum closely matching an incandescent spectrum.

Present white LEDs usually use a single phosphor so you get two broad spectrum peaks - one from the direct light from the blue LED itself and the other from the yellowish phosphor.

In their recent PAR60 alternative LED bulbs (60 Watt mains replacements) people like Philips are placing the phosphor on a "globe" outside the LED and are using multiple phosphors to get several overlapping emission peaks and a better overall spectrum.

The standard measure of the "goodness" of the white from a light source is "CRI" = colour rendering index. This is essentially a measure of how well a range of test colours appear when illuminated with the test light compared to illumination with "white" light.

Spectral peaks in multiphosphor LED. Usually you get blue plus one other. 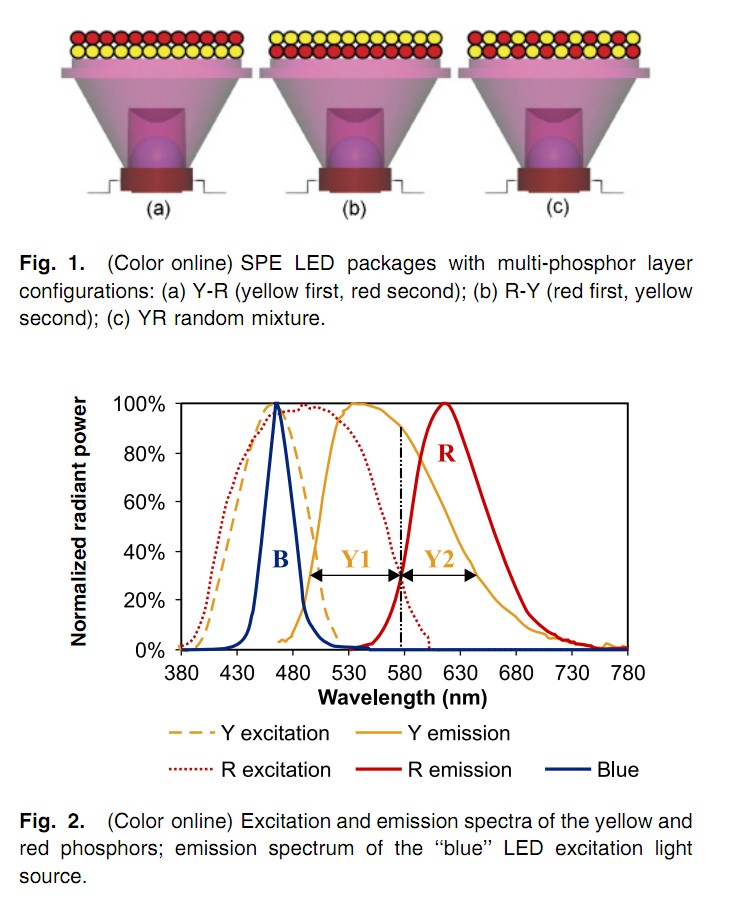 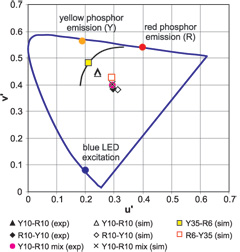 Incandescent lights produce light by superheating an object that acts like a blackbody, which defines its emission spectrum. This is why, to get a colored light, you have to filter the emissions down to just the desired color.

Light-emitting diodes, however, generate light by different physics. To get an LED to emit light, you forward-bias the diode to excite the electrons in the junction's band gap. These electrons will later return to their ground state energy level by emitting a photon. Since the energy of a photon and its wavelength are directly related, the color of the emitted light is directly related to the width (in energy) of the band gap (i.e. the difference in energies between an electron's excited state and its ground state). This band gap is set by the doping and chemistry of the semiconductor.

This is why LEDs generate pretty much one wavelength (it's actually more of a Gaussian, because the band gap isn't exactly the same everywhere). To get a wider emissions spectrum, you have to either use fluorescence (as in Russell's answer) or have multiple LEDs with different colors (Red-green-blue being the usual combination).

The really fun part, though, is that the chemistry wasn't there until the 1990s for full spectrum. Up until the blue LED was invented, the shortest wavelength (highest frequency, highest energy) that the photons could have was around 550 nm, about yellow-green (commonly known as "green" LEDs in the 80's, now still known as "green" even though there are "true green" versions, based on blue LED chemistry, which are far better for mixing with red and blue to make arbitrary colors. So it wasn't until blue LEDs became feasible that LED lighting made any sort of sense.

Thus, LED makers have an uphill battle: they are trying to approximate a blackbody spectrum with wide-band rare-earth fluorescence and narrow-band direct light.

I have seen a driver chip for RGB LEDs that is intended for backlighting purposes, though. It allows the light composition to be adjusted as the LEDs age, to try to keep the light in line with a target color temperature, say 5000 K. It will be interesting to see if this makes it into general use.

You can currently buy LED strip lights in both bright white or warm white options. A warm white strip I bought recently definitely had a much lower colour temperature than the RGB strip I have (when set to equal intensity on every channel) but still nowhere near as warm as incandescent light - much closer in fact to fluorescent lights.

One interesting thing to note though, was that the 5 leds at each end of the strip must have been from a different batch of surface mount LEDs, as they were all much warmer than the rest. In fact I would have been much happier if all of the LEDs had been of this type.

As another point of reference, I recently stayed in a hotel which used an LED strip for feature lighting and that also had a relatively warm light output, being warmer than the cold fluorescent lights in the room, but colder than the warm fluorescents.

Not the answer you're looking for? Browse other questions tagged led spectrum incandescent .

6
What type of method for producing White-Light LEDs is the most common?
8
Replacing incandescent bulbs with LEDs, unexpected behavior
19
How do filament LED bulbs work, looking very similar to incandescent bulbs?
4
Cool White LED bulbs: Are they "full-spectrum"?
3
Trouble converting 12VDC incandescent to LED: lack of resistance
2
How to build a continuous LED bar?
23
Why are there only RGB and RGBW-LEDs, but none with more chips inside one housing?
0
Instrument bulb LED replacement
1
LED Lighting not working