I have recently read of a dangerous USB drive containing a circuit instead of storage, that destroys the hardware of a computer by injecting a high voltage, high current pulse into the port it is plugged into. See this article

It should be easy to test an unknown USB drive for this sort of danger by plugging it into a separate test module before taking the risk of inserting it into a computer's USB port. Does such a test module exist? Is there a commercial version, a circuit or kit that can be obtained?

Having read that article I would routinely test every USB device before using it.

There is also the option of just not picking up any USB device you see and joyfully plugging it into whatever computer is nearest, as a general rule.

Back when Floppies (any size, really) were the thing and people owning a computer possessed some sensibility about it, this was actually general common sense. Go to an exhibition, get disks, think very, very hard about whether you want to put those in your main Atari/MSX/Whatever/PC.

Not because disks could generate high voltage and destroy all your hardware, but because they can also contain any kind of software that could do any kind of whatever.

Sure, modern operating systems are a bit more protective about "hey, this thing wants to install and it offers a driver itself, cool, here we go!" or "hey, this says auto run the software, and GO!". But funny thing, there are still plenty of holes and especially so in USB devices that combine multiple purposes.

Ever tried a Sandisk Cruzer on a fresh Windows install? Cool huh, that it offers to install software for you! If you have some security options disabled in up to Windows 7, it may even do that without telling you. Now think about someone like that monkey brain, but with more of a sense for software than hardware.

That said, here's your schematic for the destroyer detector: 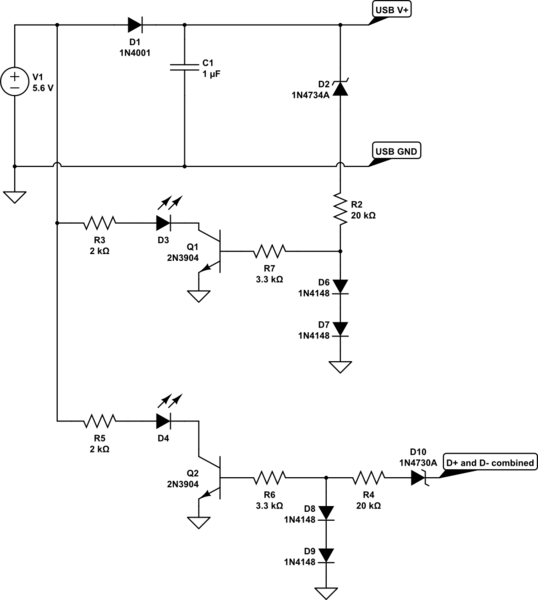 The 1N4148 diodes are only to protect against high energy spikes forcing an insane base current through the relatively modest 20k resistor, now that flows through those diodes first. Still a lot can break, of course, but this could be mass produced at the one or two dollar range, excluding the power source. If you see it as a discardable tool, you can leave out the 1N4148 diodes and the 3.3k resistors.

When the diodes flash faintly the "violation" is small (10V spikes or such), when it flashes brightly the spikes are high voltage and probably high energy.

But, of course, mass producing this is an absolute and utter waste of your money and I see this as a simple course of "You don't always need complicated electronics to detect things" tutorialing, rather than "here's a real problem that needs a real solution".

Get a cheap USB wall charger. Open and modify it so that the data lines are shorted together and add a current limiter to the Vbus pin. Now when ever you plug a drive in. It will be powered. If it's a USB killer, when it sends the pulse on the data line it should blow up quite nicely. Thus if the USB stick explodes, it was a USB killer.

But seriously, just use a cheap wall charger. If the charger stops working then you might want to question the USB drive. No computer anywhere to take damage.

Not the answer you're looking for? Browse other questions tagged high-voltage usb-device tester or ask your own question.

123
What measures should I take to protect the USB ports of my PC during development of a USB device?

1
USB Hub project
4
Short circuit test on long coaxial cables
3
How do you test SMD ICs that are not soldered to a PCB?
0
USB is not recognized by device manager but seen by vender's software
1
USB device not recognized
1
How can the test pen light up when touching your fingers that doesn't have or have very little electricity current?
2
How to make a DIY Flash Drive?
4
How to test for USB dropouts on STM32F?