I need to send a string of bits to a chained set of RGB LEDs, each of which have their own controller IC. The datasheet for that IC, the WS2811, is here.

The protocol is quite simple: each bit, both 1 and 0, are sent as a high and a low, with different mark-space ratios, and are then strung together.

At 400kbps, the mark-space is as follows:

The data can either be sent at 400kbps or 800kbps. I'm not bothered which one I use, but I expect 400kbps will be easier to implement. (At 800kbps, the above times are halved.)

My question: How could this best be implemented? I'll probably be using a 20MHz (5MIPs) 8-bit PIC MCU to determine what data is to be sent, and I'm looking for the equivalent of a USART IC that the MCU could rely on to transmit data with the above encoding.

There are three ways I envisage sending that kind of data at that speed:

For point 1, I can't find any IC that will do it. Do they exist?

For point 2, I have ideas for how it might work, but no solutions so far. One solution: Bit-banging would be very hard, having to be written in assembler given timing requirements. Another solution, although not capable of achieving the 100ns resolution for timing of the PWM signal to match the specs in the datasheet, could configure the USART on a PIC MCU to transmit synchronously - except each 4 bits transmitted would just be a hacky way of sending one PWM bit. So to send 400kbps PWM data, the USART would have to be capable of 400 x 4 = 1.6Mbps. Then, to send a PWM binary 1, the USART would send HHLL, and to send a PWM binary 0, the USART would send HLLL. This would only barely satisfy the +/-150ns timing requirements, a margin of 25ns. And I haven't found a PIC that can transmit that fast serially anyway.

So at the moment, option 3 is my only option: build dedicated hardware out of logic ICs. For example:

In short, I can't find a good solution! It seems like an awful lot of work for such a simple problem. How would you do it?

These are popular chips, and the very popular WS2812 RGB LEDs (aka Neopixels) use the same 800KHz signal timing and protocol, so you are not alone!

The chips are not as finicky as they seem and can easily be driven from an 8-bit microconroller...

People typically bit-bang them directly from a normal GPIO pin, which does require a little bit of cycle counting to get the timing right, but does not require any additional hardware except for maybe a level shifter if you are running the MCU at low voltage. The above article includes the following very simple bit-banging code for AVR that should be trivial to convert to PIC...

Other techniques are also possible. I've had successes getting a UART to drive them...

...which can relax the timing requirements, especially on chips that have large transmit buffers.

(scroll down to "Technical Details")

...which is very complicated, but very cool in that there is almost no CPU load.

These are all easy solutions and are there are plenty of code examples for all of them. The right choice really depends on the application and what factors are important to you. 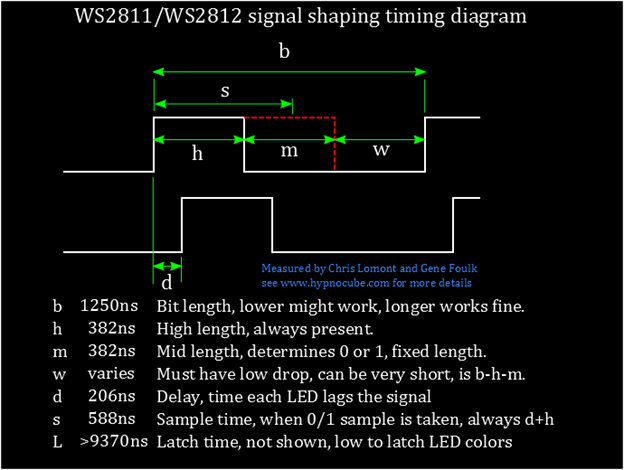 And, it appears that some folk are using SPI like this: - 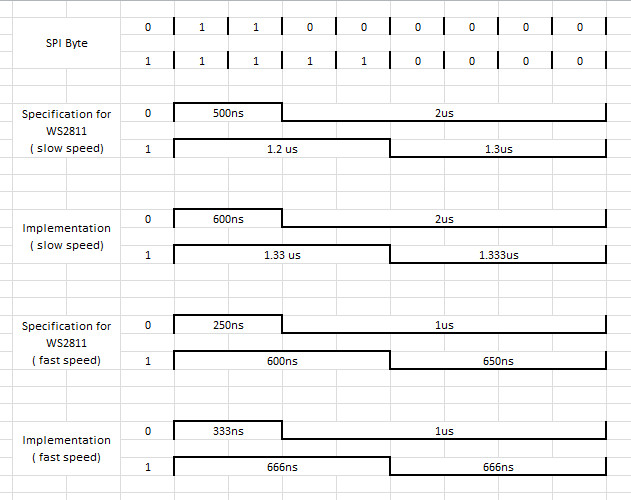 So maybe consider using SPI if your chip supports it.

have the bit clock drive a ramp generator and the use the data signal to set the threshold for a comparator that's watching the ramp, in this way you can get one bit of data out for every bit you stuff into the usart

Not the answer you're looking for? Browse other questions tagged pwm uart synchronous or ask your own question.