Next, I wanted to "square out" the wave a little by running it through a SN74AC04 HEX inverter. So when I tie the output of my oscillator to A0 I get nothing but a flat line on O0.

So thinking maybe the '04 was bad, I swapped it out. Same thing.

Next, I decided to back down the frequency. So I plugged in my SIGLENT SDG805 waveform generator into A0 (I unplugged the oscillator).

I then tried different frequencies. Starting at 1 KHz all the way up to 5 MHz (the maximum I can generate with the SIGLENT). The scope shows a very nice square wave for the most part. 5 MHz is a little off but the scope shows pretty much the same thing as if I had a 5 MHz crystal.

Anyway, why does the 14 MHz oscillator show a flat line? The specs of the '04 say (from what I understand) that it should be able to handle that frequency.

I'm running everything at 3.3v.

The specs say tPLH and tPHL at 3.3v should be about 10ns and 9.5ns respectively. 10ns should allow 100 transitions per micro-second right?

Anyway, what am I doing wrong?

How are you plugging this all together? On a proto plug board?

If so your problems could be related to this. Proto boards can cause a lot of problems when the frequency starts to get up there over a few megahertz. The problems relate to coupling between adjacent buss nodes and the larger than normal circuit capacitance that the buss tracks being to the party.

That you want to "square out" your oscillator suggests that it is not providing a logic-level signal, but rather something like a sine wave. Such a sine wave is, of course, referenced to zero, so the highest amplitude portion of the waveform simply never gets high enough to drive the inverter low. Try this sort of circuit 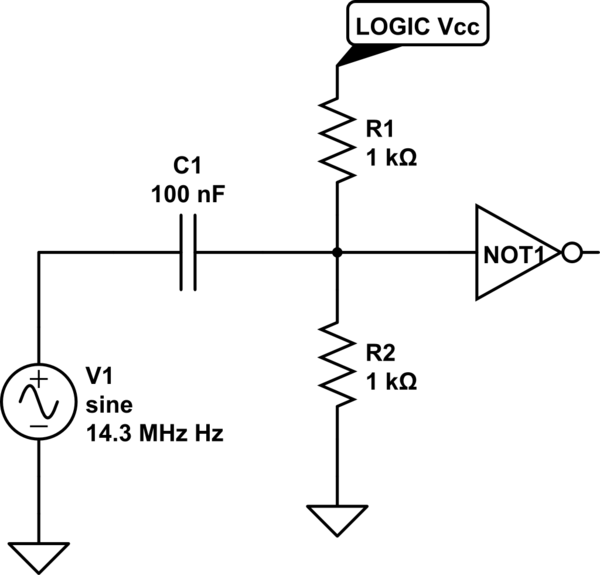 simulate this circuit – Schematic created using CircuitLab Make sure to use a ceramic cap. And be careful to make your connections, especially ground, as short and thick as humanly possible.

Not the answer you're looking for? Browse other questions tagged inverter ttl high-frequency or ask your own question.

9
How does an increase in operating frequency result in decrease in the size of an inverter circuit?
6
How can I track where this 471kHz noise is coming from?
0
PCB track width for MHz frequency
2
How to measure parastic capacitance of a trace
3
Modified sine wave inverter
5
Is there a small (6-pin) DIP I can use to generate multi-MHz squarewave clocks with an external crystal?
0
Why not using high frequency AC at homes?
2
Why does my crystal resonate at 4 times the specified frequency?
0
I need diodes to build a R-2R ladder DAC from original TTL chips (not Arduino) don't I?