As part of my my consideration of possible solutions to my multi channel variable speaker number problem arising from my attempts to restore radio functionality to an old hotel intercom system (see previous post on the subject if interested) I have been considering how to distribute say three audio streams delivered to multiple locations (by way of three/four cores per location), where a switch at those locations can be used to select an audio line.

My inexperience is leaving me slightly unsure of what approach to take in terms of the big picture / over all design. Basically what I want to achieve is this...

BUT... I want it for many (10+) rooms (the room being the right hand side of the diagram, where the switch and speaker is).

The problem is this leads to a design that looks more like this: 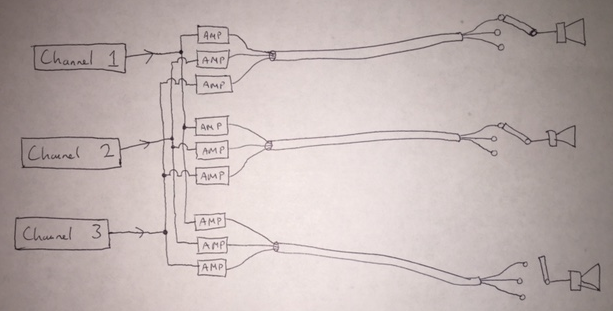 That's three 'rooms', but with a maximum design consideration of 4 audio channels and 13 'rooms' this means over 50 amplifiers. Small amplifiers are cheap, but still, I can't help feel it's a bit of a mad design!

Trying to come up with something more sane, I considered this:

BUT... The system should obviously survive usage, and here the impedance of the load applied to the amplifiers will change dramatically as variable numbers of speakers are turned on and the audio lines tapped... Obviously it's going to halve just from a second speaker being brought online with the same channel, and whilst it's not a likely use case, what if someone went round turning on 10 or more speakers all on the same channel!? The impedance of the load is going to be REALLY low now, and I have no idea if it is allowable to have such a variable impedance load for an amplifier. I do realise it's not normal or ideal, but is it acceptable if the amplifier is big enough to handle it?

I'd really appreciate any comments and/or help with the above questions or any suggestions for an alternative approach. I'm obviously more than happy to put time and effort into researching and working to expand the ultimate solution, but it's not currently clear to me which direction to go in at the moment!

Yes, it is allowed to have that variable a load on your amplifiers, given certain precautions. Most amplifiers can tolerate open circuit on their outputs, and, subject to limiting the output so they don't get too hot, somewhat lower than their 'rated' load.

A common method for supplying multiple speakers from a central location is the '100v line' method. Each speaker has a transformer before it to raise its impedance. This can get expensive in transformers, that have to be rated for the audio range.

You could precede each speaker by its own local amplifier, which would raise the per room loading to a level where it ceases to be an issue. If powering the amplifiers via the CAT5, you would want a beefy electrolytic across the supply at the amplifier.

I have came across this in passing and didn't read the whole thing so my concern here may be baseless. However, having Cat5E wire at the output of an audio amplifier is potentially dangerous. Cat5E has very limited power transfer ability and the cable is rated to 0.5A max current or thereabouts. Anything above this is a potential fire hazard.

In addition, there may be different (and more conservative) ratings for residential cable and running speaker level signals through installed Cat5E may also be a violation of local building codes.

Therefore I strongly that you have any solution you come up with checked out by licensed professional who is familiar with local building codes.

Not the answer you're looking for? Browse other questions tagged amplifier audio impedance speakers or ask your own question.