Effect of BJT common emitter amplifier resistor(Rc,Re) ratios? How to select it? 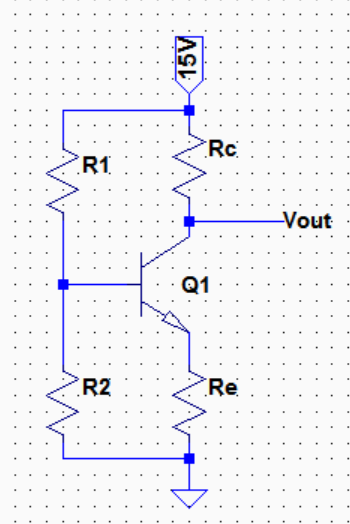 Above is a part of a BJT common emitter amplifier with 15V Vcc(all caps ignored for DC). I was following a tutorial which explains how to setup parameters step by step. When explaining the DC biasing section, the tutorial first sets up values for Q point Vce i.e VceQ, Rc and Re.

For a maximum Vout swing, we should choose VceQ as Vcc/2. This can be seen by a DC load-line. I think it is because the maximum change in Vce will logically yield a maximum swing in Vout. At Q point we can then take VceQ = 7.5V. So far so good..

Then the tutorial chooses the ratio of Rc/Re as 3 i.e Rc = 3*Re. And then it goes to investigate other parameters without explaining why the ratio is 3.

I tried to setup this ratio first 3 and then 4 and then 14. What I found out is the more the ratio the more swings the Vout.

Lets first take Rc/Re as 3 as the tutorial suggests:

Vout_min (when Q1 is in saturation and Vcesat = 0.2) becomes as follows:

So what we see above is a Vout which has a middle point at 9.5V when no bias current exists and which swings up to 15V and down to 3.9V. This corresponds a total swing of 11V.

Vout_min (when Q1 is in saturation and Vcesat = 0.2) becomes as follows:

Here what we see above is a Vout which has a middle point at 8V when no bias current exists and which swings up to 15V and down to 1.2V. This corresponds a total swing of around 14V.

2-) Of course Re shouldn't be too small but what is the rule of thumb here for Rc/Re ratio? And why?

They apparently set the Rc/Re ratio to 3 because they wanted a voltage gain of about 3. Presumably that was desirable for the role of this circuit. Basically the Rc/Re ratio is the voltage gain assuming the transistor's gain is "large". Large means that you can approximate the collector and emitter currents as being equal, which also means the base current is 0.

For good linear operation, you want to leave about a volt or so across C-E. The lowest output voltage swing is therefore Vcc-1V divided by the resistor divider, plus the 1 V across the transistor:

There is no rule of thumb for setting Rc/Re. This is basically the voltage gain of the amplifier. You set this to what it needs to be for other reasons.

However, you can't just make the gain infinite since then other factors that we can reasonably ignore at modest gains get in the way. These other factors are often hard to know. I'd say, try not to exceed a voltage gain of about 1/5 the transistor current gain. That's of course a tradeoff I picked out of the air, but with a reasonably good transistor gain, like 50 or more, a voltage gain of 10 is doable. Beyond that, the approximation that the transistor gain is "large" and you can mostly ignore the base current becomes less valid. So does the approximation that the B-E voltage is fixed.

As a exercise, see what happens in your circuit when Rc/Re = 3 and the transistor gain is 50 (a quite reasonable minimum guaranteed value for a small signal transistor). Then analyze it again with infinite gain. You'll see only a rather small difference. Now do the same with a gain of 30, and you'll see much more sensitivity to the transistor gain.

As you reduce Re, you reduce the voltage across it. Now you want to fix Vb at Vbe + V(Re) by selecting R1,R2.

So far, so good ... but remember that Vbe is not precisely 0.6 or 0.7V, but a function of Ib (as is the voltage across a forward biassed diode) and of temperature : it decreases by 2mV/K. So over a 50K temperature range, Vbe can vary by 0.1V. Because you fixed Vb, this causes variations in V(Re), hence Ie, hence Ic, hence V(Rc).

So V(Re) should be large compared with these variations, and usually > Vbe unless you're seriously pressed for headroom (e.g. 3V supply). Here, I ask, how important is that last 10% (1dB) of voltage swing? I would suggest Rc/Re < 10 as a good rule, and I'd look for 2*Vbe across Re if possible.