What are some economical ways to get a remote analog video feed?

I am a computer programmer and I like playing with robots.

But I don't have access to tons of cool toys so I try to make do with what I've got.

The other day I was trying to navigate an R/C car remotely via Skype over Wifi after velcroing my iPhone onto it.

It works well enough indoors. Even then there was a good second or so of latency.

Once I headed outside, though, there were so many frames being dropped I ended up peeking out the windows and cheating.

I realized that sometimes digital technology just isn't the way to go. I would have had much better luck with an analog video feed. I'd get progressively more noise as my signal got weaker, but I wouldn't lose contact for seconds at a time. Yes, Skype probably uses TCP so I've got this entire network stack working against me. But i think the root of the problem goes deeper. I need more robust transmit technology. Packet switched networks ain't gonna cut it.

So I don't know where to start. My guess is it's probably a good idea to use a similar radio signal to the type that was used for television for several decades. But these days, a digital video camera is a lot more capable and compact than... analog video cameras. Is there any reasonably simple way to turn a modern video feed into an analog TV signal? Does such a thing exist? an accessory to plug into a camcorder that produces an analog signal?

I think what I need is a crash course on some slightly obsolete tech. Even HowStuffWorks' articles are too modernized, though it's possible they have a gem explaining how an analog UHF television signal works somewhere that I haven't been able to find.

edit: Okay, this is proving to be pretty informative. I gotta narrow down how to get myself an NTSC transmitter or something like that.

Could somebody help me out? Suggest some equipment I could try to use?

another update: Oooh I found something. Just gotta do a little bit of digging.

So what sortsa hardware do they have in these things? I'd like to get into the guts of it so I can get at the signal so I can amplify it for a range I find suitable for my needs. What methods exist for video feed security? (thats one aspect digital systems have the upper hand on)

It used to be possible to get these little modulator units that took NTSC video in, and would put out a signal on channel 3 or 4. Not sure if you can still get those, they were common in early 80's 8-bit micros, back when nobody could afford actual monitors, and would let your computer drive a TV. With the demise of analog broadcasting, they probably aren't manufactured anymore, but you might liberate one from a defunct VHS machine. Curiously, a quick search reveals all manner of consumer productized ones available, which might work for you, too. The things I'm talking about look like so: 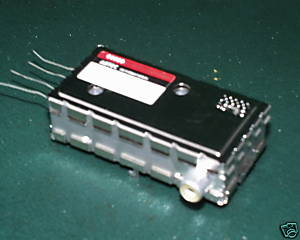 Anyway, one of those modulators, an NTSC camera module, and perhaps a bit of amplification (about 72MHz ?) and you'd have your own low power analog TV transmitter. And by low power, I mean RF, not battery draw. You'd probably get plenty of range on 0.1W to 0.5W of RF output. This might not even incur the wrath of the FCC until they get around to re-assigning the former analog TV channels.

I have used SuperCircuits for various wireless video projects. They have a wide variety of items with different sizes and performance, including light weight and low-power wireless cameras and video links.

The channel 3/4 thing scavenged from a VCR or whatever is not powerful enough to transmit, and you are probably not licensed to actually transmit in this commercial range anyway, so getting something like this off-the shelf is probably the best way to go.

Barring that, there are kits available as well as schematics to roll your own, but again, are often in some sort of licensed frequency range (such as Amateur Radio bands).

Not the answer you're looking for? Browse other questions tagged radio signal video tv or ask your own question.

1
What solutions are there for getting HD video?
3
What micro controllers or microprocessors are capable of high resolution video but are not BGA?
0
What would be the cheapest way to get video signal?
0
What solutions are available for generating video signal?
3
What are some causes of amp clipping aside from those related to exceeding the rail voltage
3
What should I do to unused input parts/features (analog and digital input pins, and power pins) of a video scaler chip?
4
How did the Telstar 525/405-line conversion system from 1962 work?
0
IC with SDCard and LVDS interfaces for video playback, what are they called?