What is the purpose of this op amp?

I am trying to build a pH meter using the below circuit.

I am trying to understand the function of Op Amp U1. As I understand it, the LM4140A-1.0 is a voltage reference outputting 1.024V, which is split into 0.512V by the voltage divider. This is fed into the Op Amp and through to the pH electrode where it offsets the voltage it generates (from -400mV to +400mV).

My question is, why do I need that unity-gain (buffer) op amp, why can I not just connect the 0.512V from the voltage divider into the pH electrode.

For completeness, I plan to take the high impedance output from the pH Electrode and pass it into a dedicated ADC, not the Op Amp U2 as described below, if this has any effect on the answer. 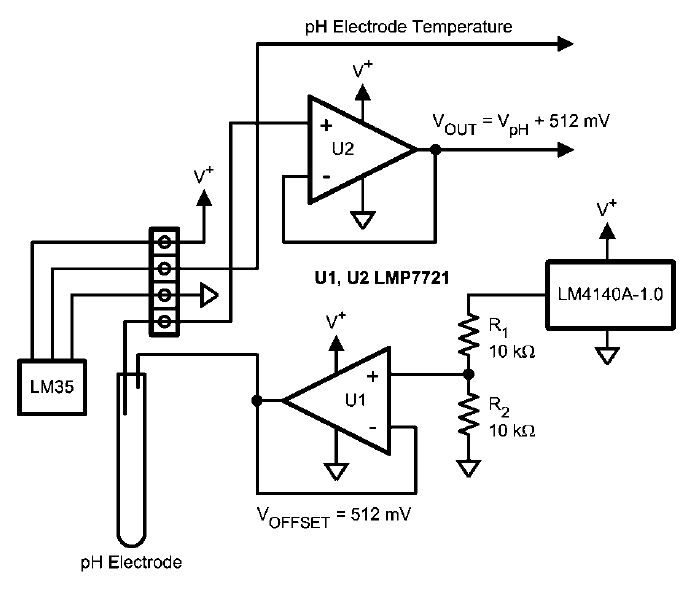 Amplifier U1 helps to make the circuit as close to "ideal" as possible. In the pH cell the impedances involved re very high and any variations from ideality are reflected in the results.

The "challenge" is given in the following section from the application note:

ie any error in this voltage is directly reflected in the output voltage as an error in pH reading.

Reducing R1 & R2 to 1 k or 100 ohms would help, at the expense of increased current drain U1 provides a better solution at acceptable cost.

The LMP7721 opamp datasheet advertises with it's extremely low input bias current. The input bias current is the current going into the input terminals of an opamp. The ideal opamp model says that's zero, but it isn't in practice.

Well, the pH electrode is probably very very high impedance (I expect mega ohms). The input impedance of a simple ADC of a PIC or AVR microcontroller is like 10k. If you imagine a voltage source, a resistor divider of 1M and 10k and connect the 'output' of that divider to the real sampler of the ADC, what voltages do you think you will measure? I think not a whole lot..

Also, if you draw 50nA through a 1MEG resistor, it causes a voltage (drop) of 50mV. This can be very significant.

This particular opamp has a huge input impedance. The error this opamp causes with it's input bias current is very very small. The opamp is able to provide enough current to drive your ADC.

The resistor divider of the reference is a similar story. 1uA load current on R1 will mean 10mV drop, which is over 2%! Using an opamp will solve this problem.

I don't know the physical configuration of the electrodes in your example, but the only situation where I could see much benefit to U1 would be if there were some source of current leakage into or out of the circuit, and most such leakage would be concentrated on the electrode tied to the op amp's output. For example, if there were a 100K leakage to ground from the signal that's now tied to U1's output, it would have little effect with the circuit as drawn. If, however, U1 were omitted, that 100K leakage would reduce the 512mV baseline voltage by about 5%. That could cause a severe error in the calculations.

If the physical configuration of the electrodes is such that leakage will be concentrated on the right one, the circuit as drawn could be very useful. Otherwise I'll admit I don't see much purpose.

In contrast, if you take the output directly of the divider node, any current flowing into or out of it will change its potential: it will not be a constant as you wish.

A low-impedance reference electrode supply is required, so that the voltage drop across the electrode-liquid interface is as low as possible.

I was going to post a comment(especially since it's an old question), but it became too long.

That Application Note National AN-1852 (Which it located at TI now), describes in large detail the reasons for the inclusion of the op-amp to begin with.

It provides two totally different services to the circuit.

First it provides a low impedance 512mV bias to the sensor by buffering the output of the divided LM4140A-1.0 reference. * Side note, why go to the bother of calling for a 0.1% voltage reference, but then not denoting that the resistors should be at least 0.1% also? Maybe I've been spoiled by the LT, Analog and NatSemi App Notes(especially the older ones). * With out the op-amp it would distort the output wave forms. The same thing happens with some in-amps when a bare voltage divider is used for its reference input. For more information on why it happens, look at some the various notes on the usage of in-amps, such as this EDN Article, and this Maxim Article. At a later date the OP asked why not leave off the voltage divider all together. If you did so, your sensor would now be be provided with 1.024V, which may or may not be too much for the sensor;You may also need to redesign the input circuit to keep the input within the op-amps input range. To summarize, if you leave off the op-amp and use only the voltage divider, you'll get a distorted sensor reading. Please note, just about ANY op-amp could provide this service, as long as the divider output is within it's input range. It's a rare op-amp that would not provide sub-ohm output impedance at DC(if using feedback that is). This answers the original question.

Second it provides a high impedance input with a very low bias current. While the OP noted his specific ADC could be used with high impedance sensors, that is not even close to being all that is required. In single ended mode it has a input impedance of 25M ohms, compared to the sensors 200M+ output. That alone would reduce the output voltage by 1/8. Now when you take into account the various leakages the ADC would present, any chance at accuracy goes out the window. Which is why you want the op-amp in the circuit. Any, even semi-decent, CMOS op-amp will have an input impedance of over 1G ohm if not much greater. This means, in general, you can ignore it's effects on the signal. As far the input bias current goes(which is in essence the current being pulled from the sensor ), even a much older CMOS op-amp such as the LMC660 from 1998(I'm sort of cheating here, that op-amp is one of the greats in this area) has a input bias current of only 2-2000 fA max. That ADC has a input leakage of +/- 1 uA, an amount at least a million times worse than the op amp. Again, this would lead to distortion.

Now mind you, to take advantage of these stats to their full effect requires paying attention to detail. Like a prior answer said, at these levels, even finger prints make difference, some times reducing the advantages the op-amp brings to the table by more than an order of magnitude. This means guard rings, isolation and more.

Ops, this turned out much longer than I thought it would.

Not the answer you're looking for? Browse other questions tagged voltage operational-amplifier adc or ask your own question.

1
Tactics for stable unity-gain op-amp
1
How does this Op-Amp Circuit Work?
2
Looking to understand this DAC and op-amp schematic
0
Linear scaling a voltage by 0.1x
0
Purpose of components in op-amp radio circuit
2
First Order Filter - Voltage Follower Attenuation
0
Op-Amp / In-Amp (INA826) as voltage divider
14
Why are there extra resistors in this op-amp circuit?
1
Op-amp for amplifying a low voltage DC input
1
Attenuation in current booster circuit with op-amp