Why did my fuse blow after 3+ years of no problems?

For several years, I've had a solenoid wired to the 24VDC output of a PLC (Rockewell Automation 1769-OB16).

To protect the PLC output card, a fast-acting 500mA fuse was installed between the PLC and the solenoid. The fuse has been working without any trouble for a long time.

Recently, this fuse blew. There was no change on the line, no abnormal or excessive usage of the solenoid, and nothing out of the ordinary. It just blew. I replaced the fuse with an identical one, and the solenoid works just as well as it did before the fuse blew.

I measured the current to try and find out why it blew, and found that the solenoid is actually pulling 530mA. I let the solenoid continue to pull that much for over 20 minutes, and the fuse held.

Why does the fuse not blow even though the load is pulling more than the fuse is rated for? And why would it blow only now, after more than 3 years, and not sooner?

The rating of a fuse is the amount of current that it will carry indefinitely without blowing. In order to guarantee this, most fuses will not blow until the current rises to 2× or more of their rating. In fact, if you look at the datasheet for a fuse, there will usually be a chart that relates time-to-blow to the percent (over)load. Most such charts rise to infinite time to blow somewhere near 200% load.

If you're putting somewhere between 1× and 2× the current rating of the fuse through it, you're in a gray area in which it may or may not blow, or it may just get weaker over time, eventually leading to a lower threshold for blowing.

There are other things specific to solenoids that could cause such a failure, too. At a simplistic level, you can think of a solenoid as an inductor, and its DC resistance limits its steady-state current. However, when the plunger is actually moving, the inductance is changing, and this creates an extra surge of current each time you operate it. If something in the mechanical load causes the operation to be somewhat slower than normal, this surge will last longer, and could potentially blow your fuse.

This is why slow-blow fuses are normally used with loads that have startup surges. It is also why you should use a PLC output that is rated to handle the surge.

Looking at this datasheet for fast 5x20mm fuses from ESKA, you find a table with "pre-arcing time limits" at the bottom. For a 500mA fuse, it states:

So, it is completely within the specs (of this fuse) that it doesn't blow at 530mA within 20min.

On the other side, it's strange that the fuse DID blow. We once saw the same weird behavior and did a test. We had four 1A fuses in series, each with a diode in parallel. This was connected to a constant current source of 1A, and the voltage drop over each fuse was monitored. As long as the fuses were OK, the voltage drop was far below 0.7V, and all the current went through the fuses. A blown fuse would be indicated by a voltage drop of about 0.7V:

We put five of this sets equipped with fuses from different manufacturers and batches into an oven with a constant temperature of 85°C to add some stress and got this quite interesting result: 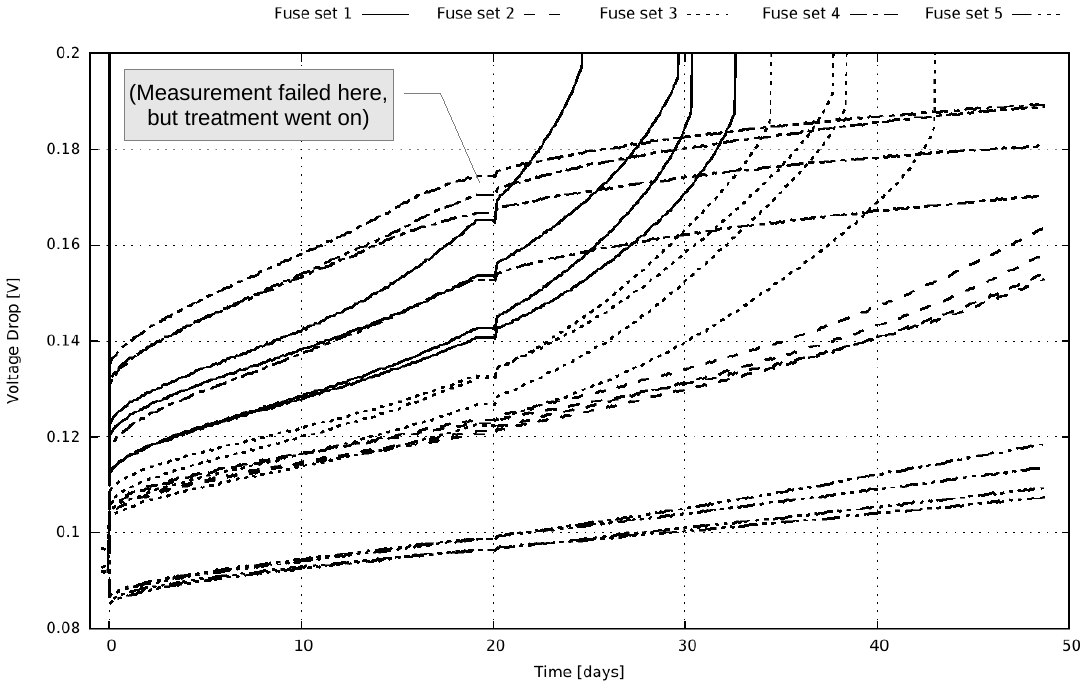 All fuses started to "age" immediately, as the slowly increasing voltage drop shows.

(I have data for a longer period, but need to search it)

Here is also a picture of the fuses:

From left to right:

The fuse wire gets hot and expands when current flows. At high temperatures, oxidation may happen, which weakens the wire mechanically, and may be electrically, too. Switching on/off a load means the wire is bent each time. This stress may cause a blown fuse at some point even when the current never exceeded the threshold.

Of course, as you are writing about a solenoid, it's possible that there are short but large pulses across the fuse which will also damage it over time.

The manufacturers said, it would be best to use a fuse rated for 1.5-2 times the max. expected current, though a too high rated fuse may not blow when it should.

However, aging still happens, and fuses blow from time to time without (external) reason.

I have seen fuse melting curves with time against current, and those curves do NOT go to 'infinity'. Infinity does not exist on graphs. Instead, with currents somewhat around or under nominal, the time will go to some large number of hours, say 1000 to 10,000. And if the current is not 'on' at all times, as probably in your case, 3 years is a reasonable 'long' time to melt.

Another way to look at this: a fuse is like a light bulb, the old type with a hot filament. Although very hot, it still takes some amazing 1000 hr to melt. And even at under-voltage, burning lower, it will not light 'forever'.

To back up my argument, here is an arbitrary fuse time diagram, found with google. It shows a pretty straight line on logarithmic scale over 5 decades, from 0.01 s to 1000 s. From 1000 s to 3 years is another 5 decades.

As yet another argument: I have seen fuses blow after 25 years of service. Once, around 2010 or so, I replaced a blown household main fuse while in Iran only to discover a coin from before the Revolution (1979)! (I am not making this up) Without an apparent overload or short circuit event.

It is a common misconception that a fuse is supposed to melt immediately ('blow') at its rated current.

A fuse is used to protect your wiring from causing a fire in the case of excessive currents, and/or to protect against electrocution in case of isolation failure. A fuse may work in conjunction with earthing, causing a high short circuit current in case of a minor isolation failure. In the optimal case, the fuse will blow very fast because of the high short circuit current.

Fuses are known to be difficult to rate to protect against overheating your wiring in case of currents that are only marginally higher than designed. That is why electrical engineers need those complicated fuse graphs.

Looking at those graphs (e.g. see my other answer) you will see that a fuse rated 100 A will take several seconds to meld at a current of 10 times that value. This will explain your question as why does your fuse of 500 mA 'not blow' with a load of 530 mA. No, it will not blow at once, but may/will meld at some later time. A fuse of X Ampere is not by itself very useful for a load that nominally draws X Ampere. E.g. in my house I might turn on a lamp of say 10 Watt, while the installation is fused with 16 Ampere (at 230 Volt AC).

Not the answer you're looking for? Browse other questions tagged solenoid fuses solenoid-valve or ask your own question.

28
Why did my fuse not blow?
5
When is fuse fatigue a concern?

11
Fuse blowing in 12 multimeters rated for 200mA, only measuring 12.5mA. Why?
9
What are the dangers of a DIY fuse in a multimeter?
28
Why did my fuse not blow?
0
Should power supply be fused on input and outputs?
2
fast or slow fuse in transformer
6
Small step down transformer fuse, primary or secondary?
0
Fuse Protection inline with DC Brush Motor
0
Can I use a 315 mA slow blow fuse instead of a 375 mA slow blow?