My first question on EE, please be kind. :-)

I am trying to learn how the ADC works on this Cypress PSoC 4100 board.

The circuit in the picture does nothing but power the board, connect it to the LCD display, and show the readings from the ADC. The ADC is set up to use the internal 1.024V reference with the bypass cap, which is built onto the 4100 board itself. The input to the ADC is on pin 2.0, which is in the upper-right corner of the photo.

The multimeter shows 580 ohms of resistance even though it's nothing but metal between these two points. That's causing the ADC (fed via the second red wire right next to the multimeter red wire) to read 100 or so mV instead of the expected zero.

If I wiggle the black wire that connects the ground rails of the top and bottom breadboards, the resistance jumps around a lot, anywhere from 200 ohms to over 1K.

Moving the wires that connect the two breadboards to the left side and away from the LCD signal lines didn't change anything.

If I connect the multimeter red wire to the top breadboard's ground rail, right next to the black wire that connects it to the ground on the 4100 board, I still see about 230 ohms. This is over a distance of about 1cm!

Unplugging the LCD display reduces the the resistance to about 38 ohms.

Removing power by unplugging the USB cable (it's USB-powered so it's all 5 volts) reduces the resistance down to about 6 ohms.

When I tried measuring the resistance between two (connected) ground rails on another otherwise empty breadboard, I saw 3 ohms max.

My question is, what's causing this resistance and how do I get rid of it? Is it some kind of inductance issue? Having 100 mV or so of voltage on the ground rail isn't fatal to the project by itself, but whatever's affecting the ground rail might also affect the input to the ADC, which would throw off the readings. 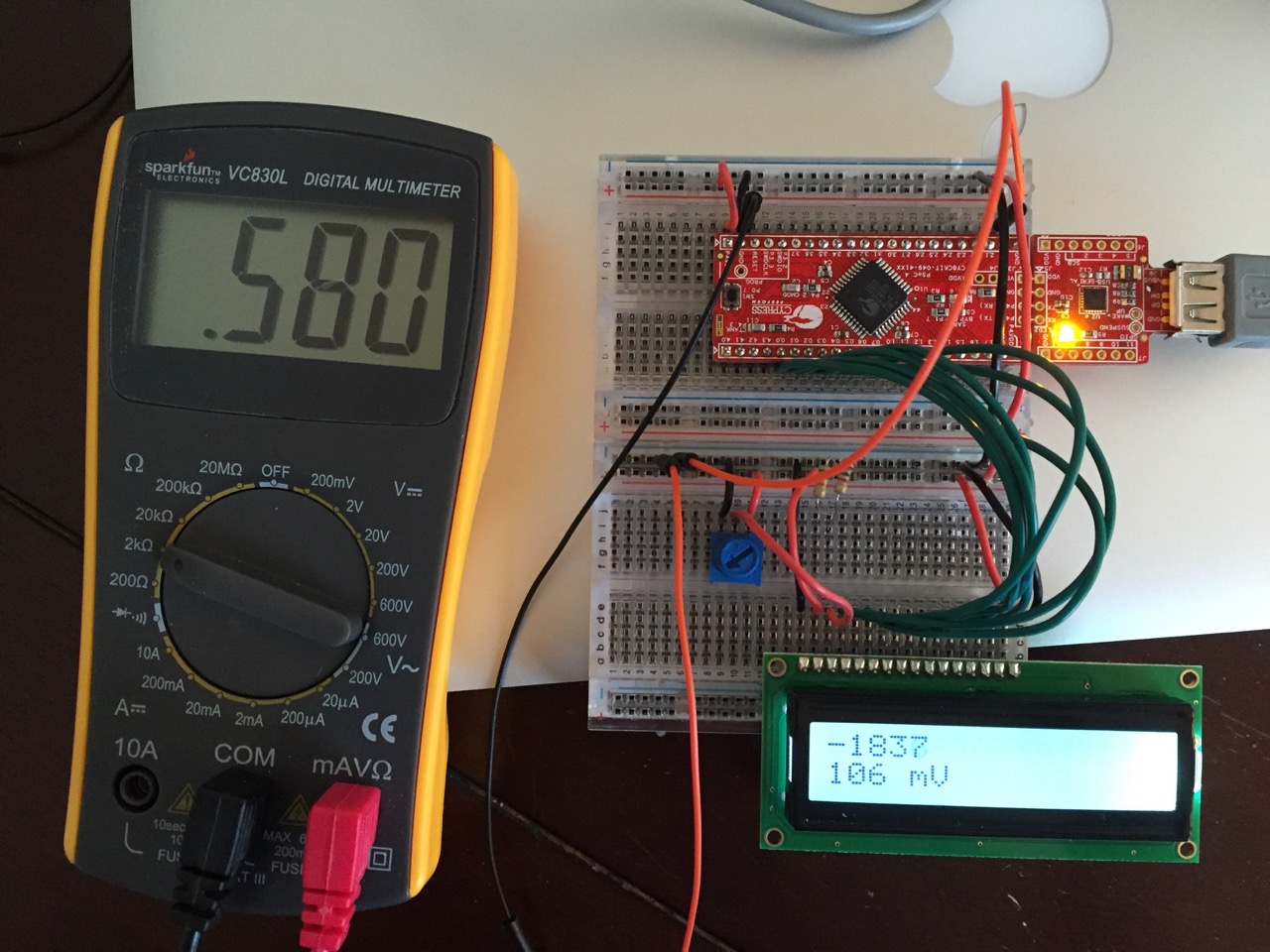 Power down before measuring resistance!

So if you attempt to measure resistance on a circuit that's powered up, and there is already current flowing in that circuit, you are measuring the voltage due to the circuit's own current, and that gives a completely misleading result.

Hello and welcome to Electronics.Stackexchange!

3Ω isn't awful for a breadboard self-resistance, but it isn't spectacular either. I'd suggest trying a few different ones, and if you have the test equipment, measure the resistance, inductance, and capacitance between adjacent rows. The data will come in handy later when troubleshooting other circuits which don't work as expected (due to the hidden inductance and capacitance.) There is a topic about this here: electronics.stackexchange.com/questions/3206/best-solderless-breadboard which may be helpful.

Brian is also spot-on, resistance cannot be measured in a powered circuit for the reasons he indicated.

The schematic shows one ground net, and no extraneous resistances in the ground path. So plugging it into your breadboard should give at most, 3Ω ground resistance.

Not the answer you're looking for? Browse other questions tagged adc resistance ohms-law psoc or ask your own question.

19
Best solderless breadboard?
5
Why can't I measure resistance when there is current on the potentiometer?

4
Why do measurements displayed in multimeter inconsistently vary by factors of 1000 depending on range?
3
Load cell, help
1
Problem with ADC of Atmega16A in differential mode
0
Testing Amps And Resistance On PC Case Fan
2
Erroneous results from ADC and piezo disk
0
Why does the ADC require 3 wires instead of 2?
1
Understanding the resistance readings between PCB connectors
0
ADC is giving fault codes when I touch thermistor attached to it