Timer0 and Timer2 configuration on atmega1280

I want to setup Timer0 and Timer2 to control the intensity of the LED (L) on the Arduino Atmega1280.

The frequency has to be 10khz and the duty cycle will be controlled by a switch or using serial comm via uart (increment and decrement); currently the only part where I'm having issues is initializing the timers and not being sure if my approach is the correct one, which is the following:

Since I need control over freq and on the duty cycle I think that I need to use two timers, I've searched if it can be done using only one but most of the tutorials and guides only focus on changing freq or duty so I've reached the conclusion that by using one timer you can only control either frequency or the duty cycle.

My plan is to use Timer2 as the 10khz clock for Timer0, when Timer0 overflows it will toggle it's signal, the duty cycle is controlled using OCROA and the freq for Timer2 is set with the pre-scaler being 8 and OCR2A = 200:

I've set Timer0 to have no clock source since I'll be incrementing it manually with the TIMER2_OVF_vect, here is the routine that sets up both timers.

Timer2 overflows correctly, however Timer0 seems to be not working as it should my guess is that since the CS0:2 bits are 0 the TIMER0_OVF_vect ISR is not triggered, however I'm not sure that if I set Timer0 to Fast PWM I'll loose the 10khz freq.

Any help is really appreciated.

I believe it's trivial to control frequency and PWM using one timer even without interrupt. You need select timer mode supporting TOP value to specify frequency precisely (16-bit timer can do it more accurately but I don't think it's so critical for LED). FastPWM is mostly sufficient hence select mode 7. OCRnA specifies frequency f=fclk/(N*(OCRxA+1)). Output pin is selected as a OCnx (x>A) and duty cycle is controlled via OCRnx (x>A) register in range (0..OCRnA). You need select correct compare output mode (how behaves output pin) but it's well specified in datasheet. There are also such issues as double buffering because there is potencial race condition as you are changing params in runtime but it's not so critical.

So, after thinking more about it, the main issue was that I wasn't able control the freq of Timer0 with Timer2 overflows, however after reading more on Timer0 section, we can configure Timer0 to use T0 as an external clock source that is ticked on rising or falling edge. T0 is wired to port D so we have to configure port D correctly as output.

Here is the CS0:2 table for 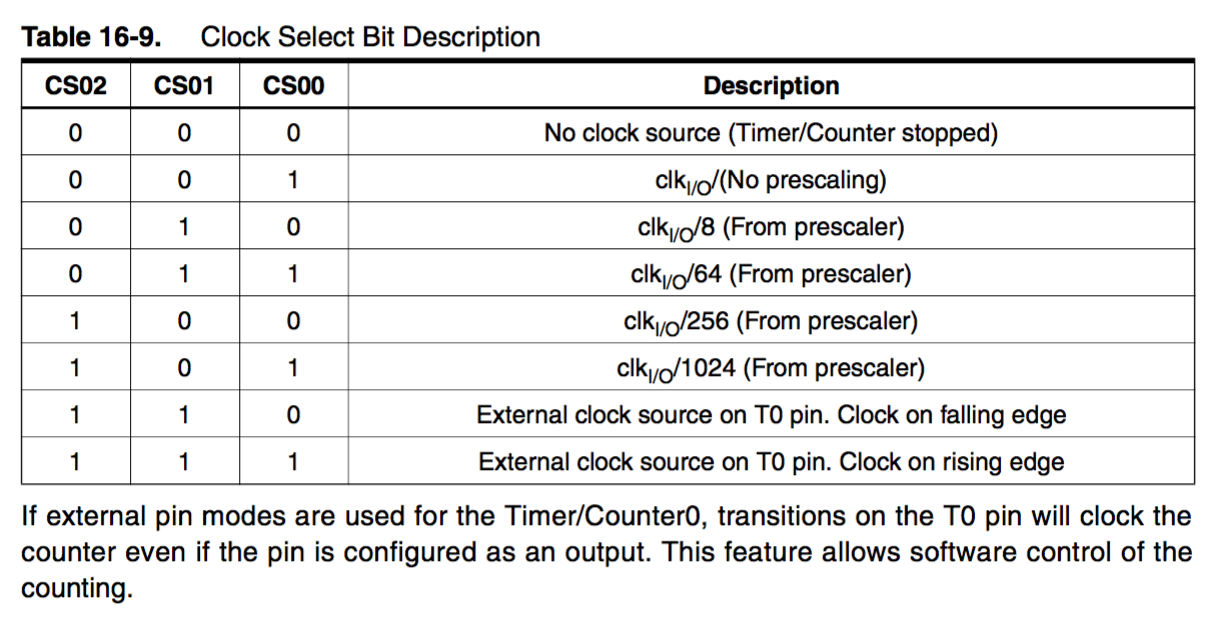 Not the answer you're looking for? Browse other questions tagged arduino led pwm atmega timer or ask your own question.

6
Handling timer overflow and compare interrupts in ATMega328 (Arduino)
1
Method to determine least-error prescaler and top values for timer1 of Arduino?
2
What is the difference between Timer0 and Timer2 in AVR
0
Controlling a servo with Attiny85 OCR1B
1
Setting a simple PWM on atmega328 at certain frequency
2
Unexplained interrupt behavior in AVR ATMEGA324P Timer Counter ISR
0
STM32405 ADC on Update Event of Timer 1 or 8
0
Driving two parallel LEDs with PWM brightness control and a “LED selection” signal