I have a small toroidal power transformer, perhaps 20VA, about 7cm outside diameter; core cross-sectional area is about \$16 \times 22 mm = 350 mm^2\$. I expect it's a wound silicon steel core.

I got a handful of these for $3 USD each at the local electronics surplus store (Halted in Santa Clara, CA) and am using them to experiment with winding my own transformers. I want to reuse the primary if possible since at about 13 turns/volt it's liable to be 1500 turns or so and so far I'm winding toroids by hand. 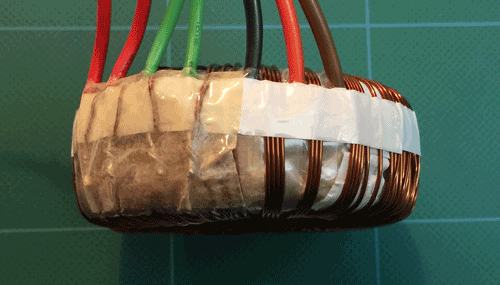 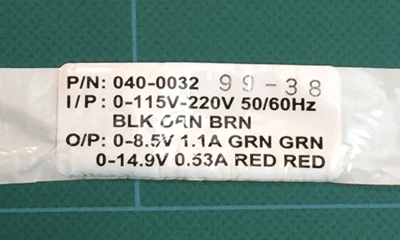 I'm not clear whether the design intent is to use the BK-OR winding by itself for US 120 VAC or the BK-OR and OR-BR windings are intended to be wired in parallel for that voltage.

So I guess I'm answering my own question in that the thinner wire seems to clearly indicate the OR-BR winding is intended to be used by itself and only when needed, and the 115V winding is just over-designed when used as part of the 220 V winding.

But just out of curiosity, what would happen if the two primary windings were wired in parallel across 120 VAC? I'm thinking it's not a particularly good idea but not quite sure what behavior one could predict.

Also I'm curious if this is a common transformer design practice. It seems like it would be more economical to wind a bifilar winding of the same number of turns, say for 120/240 VAC and then just use them in parallel or series depending. Why would a designer prefer this configuration instead?

The Japanese (back when 50/60Hz mains transformers were still viable) would often use a lighter gauge of wire for the 'upper' half of the 230V (or whatever) winding. North American makers, in my experience, not so much.

I don't think bifilar winding would be good because of insulation considerations when they are in series. It's fine when they're in parallel (and sometimes used because of skin effect or just to get a heavier gauge), but I think bad practice to depend on the wire insulation for much breakdown voltage. If you break the input to the transformer with a switch, a lot of voltage will appear across the primary winding, and half of that would be wire-to-wire with a bifilar winding.

You can't connect them in parallel because of the CT, but it wouldn't be a very good idea anyhow- the different number of turns means the transformer would quickly overheat.

Your assessment is correct about thinner wire for the orange to brown wiring - that is how I would read the resistance measurement i.e. you can't use orange to brown for 105V AC primary because it's got too much resistance. It's fine when used as a part winding on a 230V application of course.

As for paralleling them it's a non-starter - you can only realistically connect brown to black and then you'll have two windings in parallel but anti-phase the net inductance becomes zero and fuses blow!

Also I'm curious if this is a common transformer design practice. It seems like it would be more economical to wind a bifilar winding of the same number of turns, say for 120/240 VAC and then just use them in parallel or series depending. Why would a designer prefer this configuration instead?

I see a few 230V/115V AC primaries but it's not economical to wind then bifilar I would imagine. Having said I'm sure I have seen two separate windings that can be parallel or series but they would not have been wound bifilar (informed guess rather than anything).

Not the answer you're looking for? Browse other questions tagged power ac transformer inductor or ask your own question.

0
Parallel transformer outputs
1
Two windings transformer to autotransformer
5
What clear plastic stripping is used to wrap a toroidal power transformer?
4
Where should I look for transformer inductance discrepancy?
8
Audio transformer: What to do with an unused winding?
0
Connect Two Transformer in Series
1
Transformer Design
0
Wiring a transformer with two primary windings
0
Why is the transformer secondary winding voltage higher than expected?