What is this unusual LCD controller technology?

Preface: Even if you do not have a definite answer, I would greatly like feedback from anyone who has even seen an LCD using this technology.

I recently took apart a Canon digital camera from the late 1990s and obtained an unusual LCD display. Unlike the standard chip-on-glass controller technology used on modern LCDs, this one appears to have the chip embedded in the glass.

Here is the camera in question, a Canon PowerShot S100 2MP Digital ELPH: 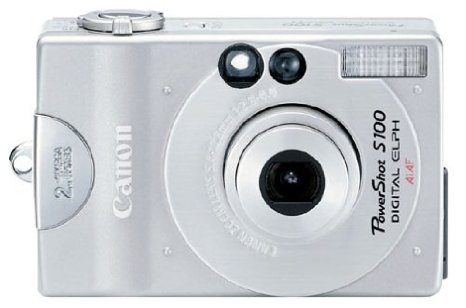 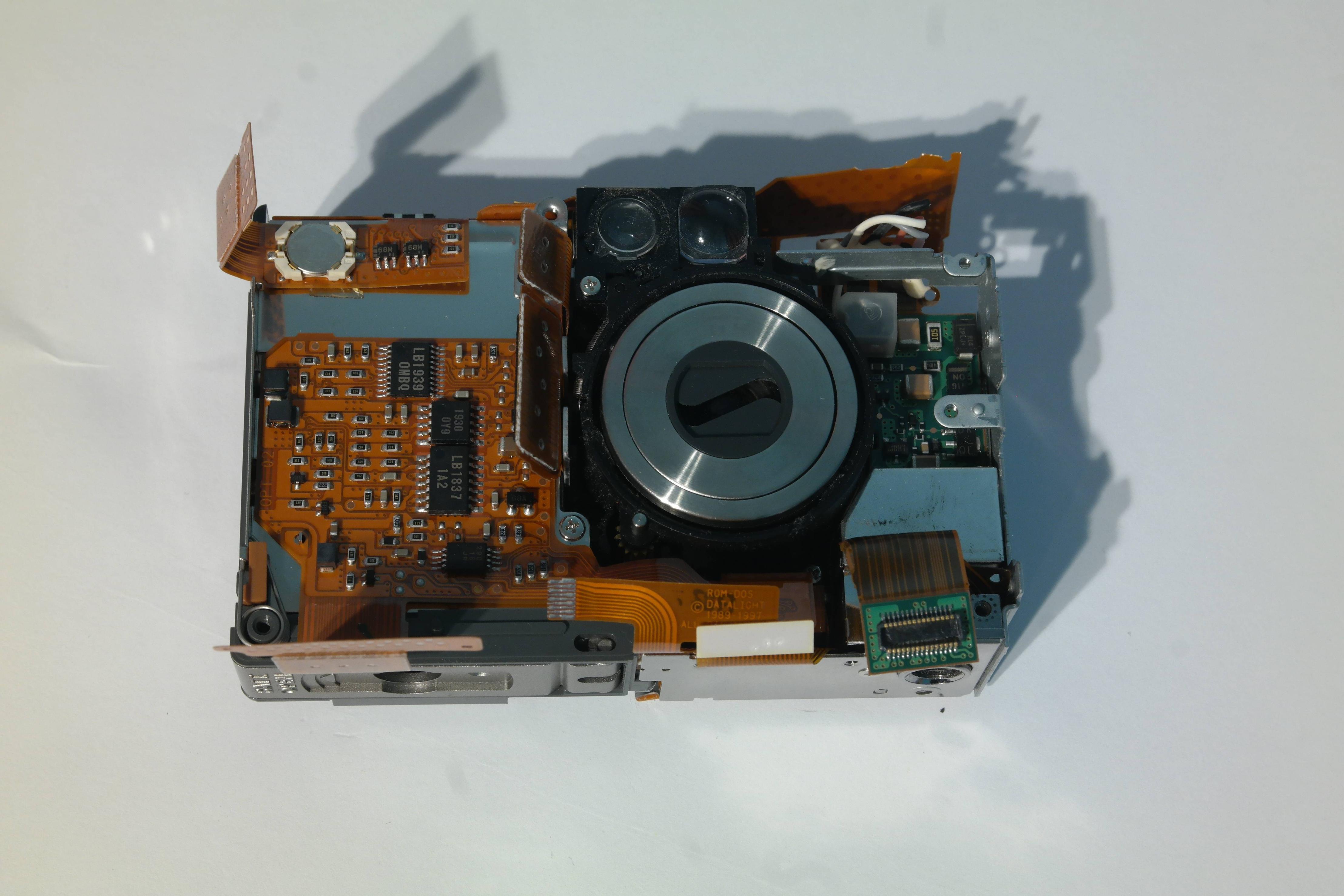 It appears to have first been sold on Amazon on September 4, 1999. I cannot find any other information about when it was released.

When I took the display out, I noticed that the metal bezel around the display was only about 4mm on each side, and the flat flexible cable attached directly to the glass with no room for the standard controller chip. The display appears to have been made by Sony, as seen at the top left of the bezel and on the back of the display. 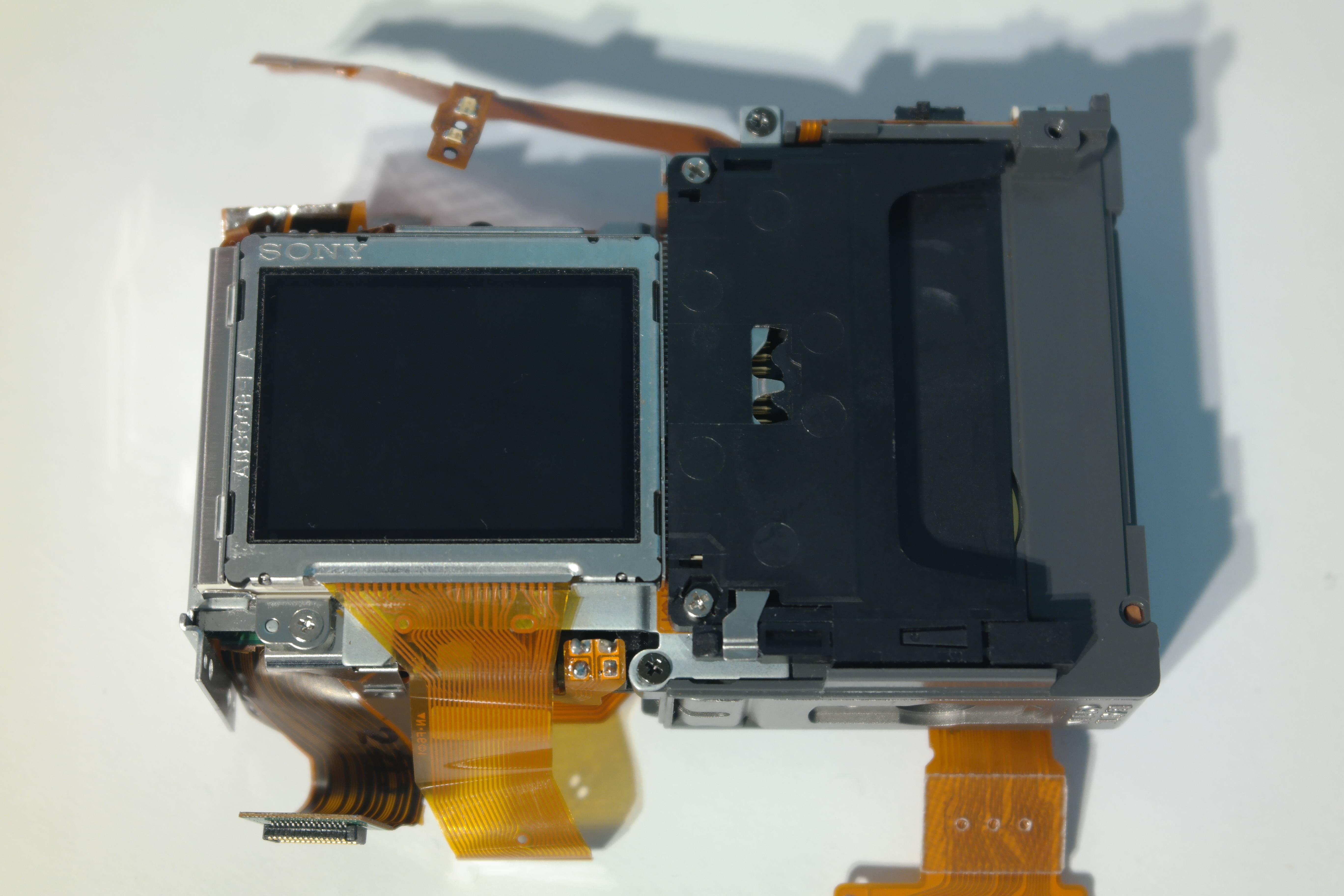 I decided to remove the metal bezel, backlight, and filters and still could not find a controller chip. However, there was a black area around the display that appeared to be painted onto the top layer of the LCD, which made me curious as to what it was covering up. I decided to remove the top layer using the following procedure that has worked for me with other displays:

It worked and I was able to isolate the bottom layer. The controller integrated circuit appears to be embedded in the glass and distributed around the outside of the display. Here are some very close-up pictures: 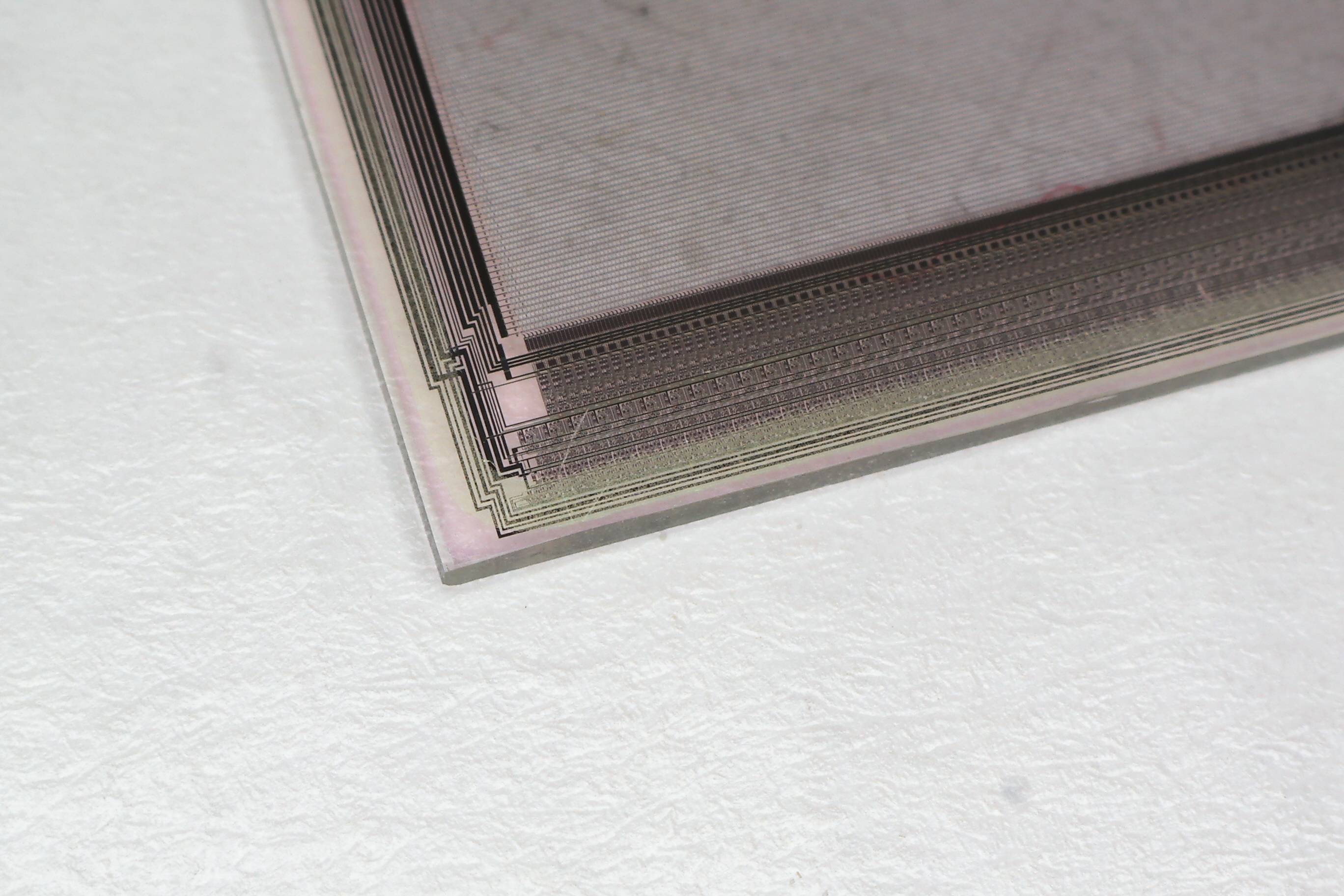 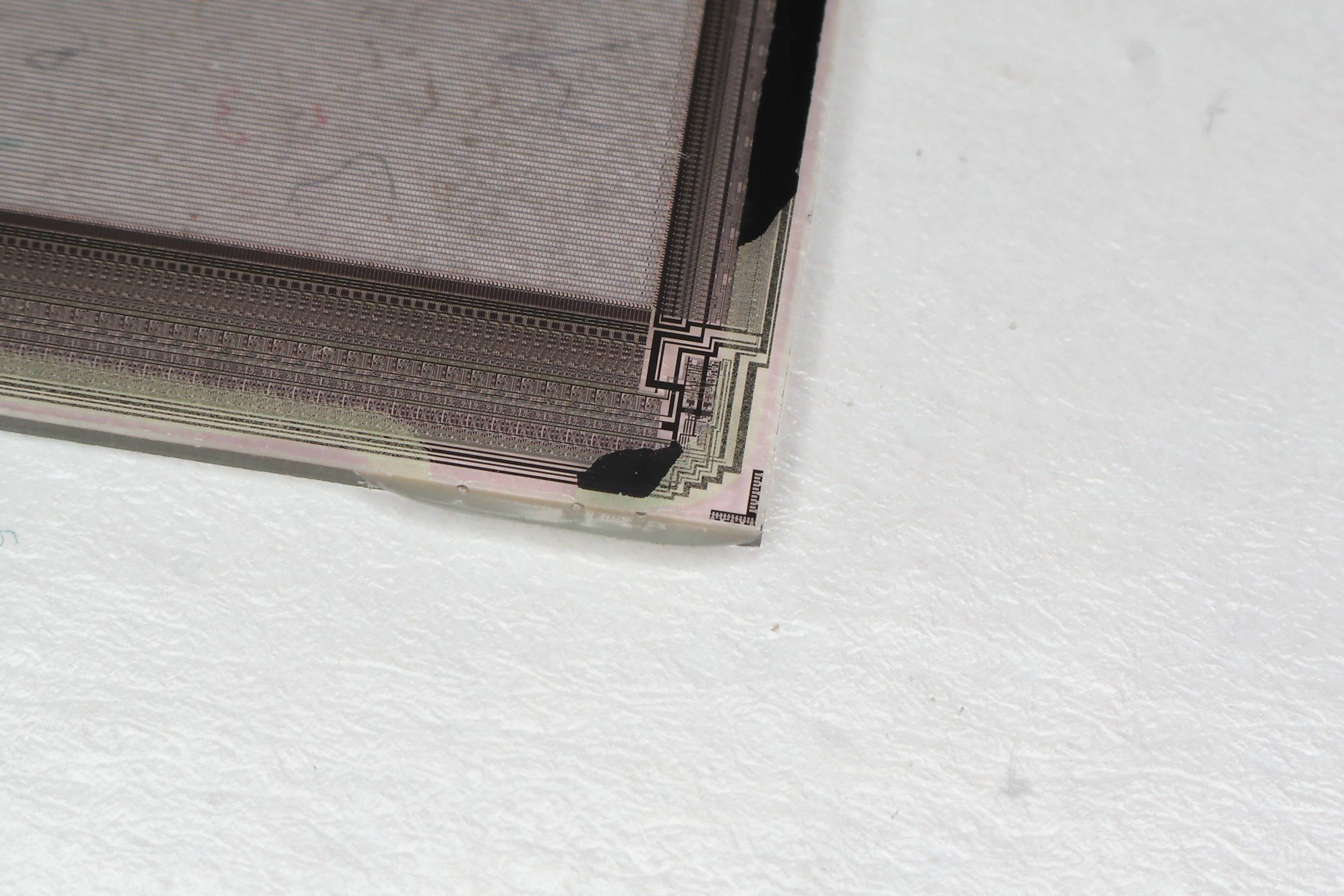 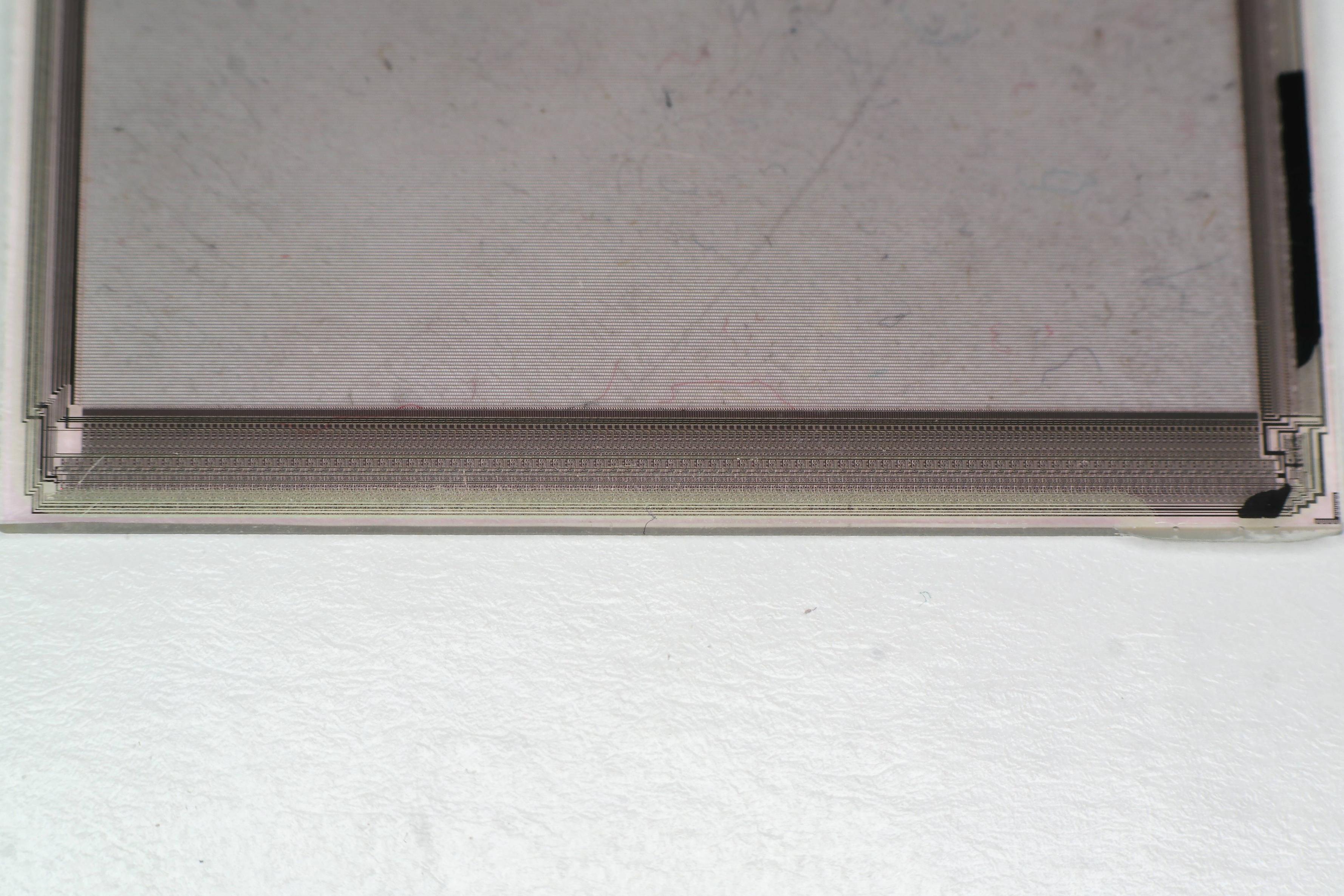 I can not find any information about this technology on the internet, even just something saying that it exists. Does anyone here know what it is called, why it was used instead of chip-on-glass, when it was used, and if there is any information out there on it? Has anyone out there even seen this before?

Related question, if anyone knows why: Why do LCDs used in cameras have the pixels in a staggered arrangement (see my photos up close or look at a camera LCD yourself)?

One 2000 review of this S100 camera claims the display was "1.5 inch low-temperture polycrystalline silicon TFT LCD". It's alas rather uncertain when the first low temp poly Si (LTPS) commercial display came out, so whether this claim can be true. LTPS is needed to incoroporate the drivers (never mind controller) on glass without separate [bonded] wafers. According to one 1999 source the JCV "DVM-1" camera, which seems to be the GR-DVM1, released around 1997 already had such a [Sony-made] display on board. On the other hand, another source claims that the 1st commercial still camera to use LTPS TFT was the Sony DSC-P9, which was released in early 2002 or so judging by the review dates.

Since the display in question is of 1999 vintage, then it's probably made in 1st gen LTPS tech with rather basic integrated "controller" on glass. An early LTPS doc advertised that "you can place the drivers and shift registers on the same substrate as the LCD cells". So it's probably not really a fully fledged controller on glass. That description of LTPS TFTs matches the more detailed account in http://dx.doi.org/10.1557/mrs2002.277 of first generation LTPS, which integrated only the X and Y drivers on the glass (but which source also places them in the 2001-2002 timeframe). Given the relatively coarse and so easily visible features of the glass circuit on the images in the question, I think 1st gen LTPS-TFT seems likely (if it's a LTPS at all)... A 2nd gen LTPS would have the D/A converter on glass as well.

Alternatively, the 1999 camera in question, while having integrated drivers on glass [on their own waffers], might have been built with an amorphous silicon a-Si for the screen itself. Since a-Si is too slow for drivers, what this means is that [in this case] your display uses conventionally fabricated drivers (as separate wafers/ICs) that are then bonded as chip-on-glass (not to be confused with system-on-glass which means LTPS or newer tech); the COG bonding is typically done using anisotropic conductive film (ACF). COG is more rugged and space-saving than using TAB. Wikipedia says that Sony is/was [also] a leader in ACF tech, so that too agrees with the display being made by them... in this older tech.

Now the display circuitry looks a lot more like that of a LTPS because of the large number of components, but who knows, they might have chosen to not use a large IC for some reason. Below you can see an [OLED] LTPS (so SOG) followed by a COG. 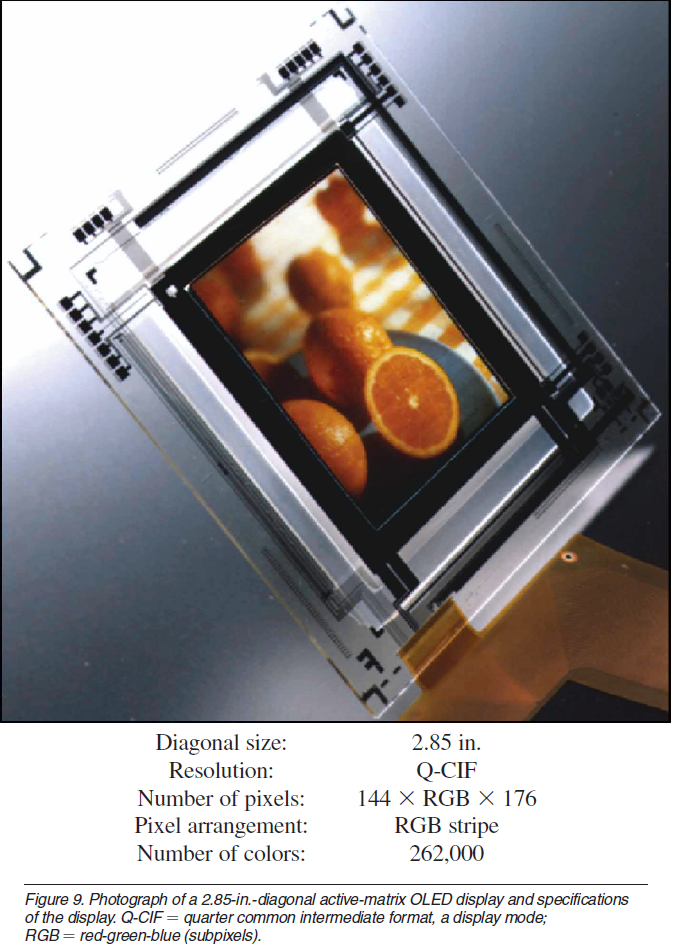 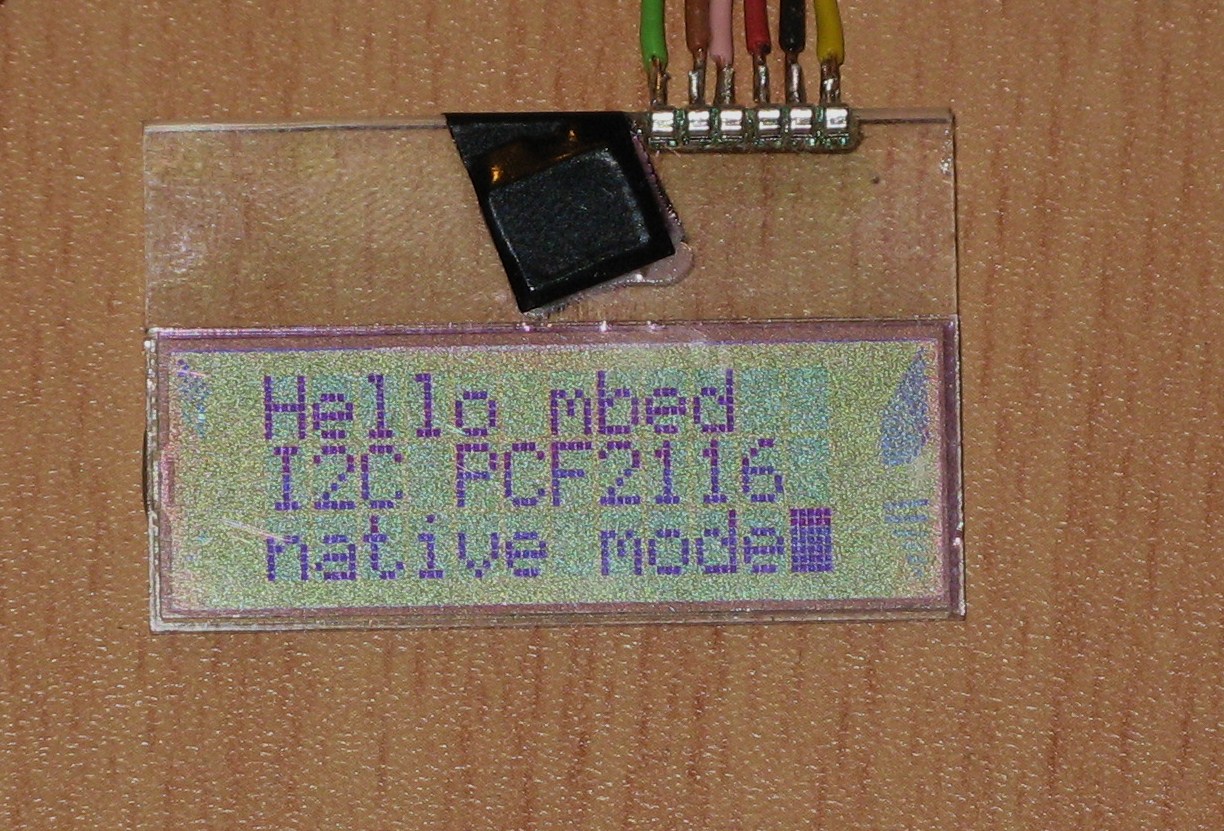 If you want to be certain, get some ACF remover, like dioxolane. :)

Regarding the pixel pattern question; it looks like the [far] less common today delta pattern might be used (right most in the image below): 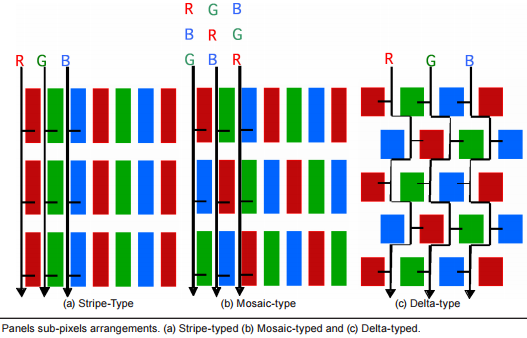 Seems to be what NEC refers to as VIT, Value Integrated TFT Technology. Alternatively known as SoG, System on Glass. They differentiate it from Chip on Glass or Chip on Film/Tape.

But the tech isn't that old. A press release shows maybe 2007.

Due to the high electron mobility of the low-temperature polysilicon used in VIT technology, high-speed peripheral circuits such as drive circuits can be integrated on the same glass substrate as the LCD. In comparison with COG and COF designs that employ external drive circuits, this integrated approach significantly reduces the number of connections with external circuits and allows for higher image definition that is less affected by the connecting pitch to external drive circuits. Taking into account the entire display module, including the backlight system and external circuit board, the reduced number of components and connected lines results in a smaller, slimmer, more lightweight display body as well as improved resistance against shock and vibration. NEC LCD Technologies will continue its efforts to add further value to its LCDs by integrating still more functions on the glass substrate.

A white sheet from the NEC Technical Journal (Vol 1, No. 3/2006, PDF) has more in-depth tech info, as well as stating that the SOG technology was first used as far back as 2002.

Abstract The SOG-LCD is formed by integrating the LCD and driver LSI functions onto a glass substrate and it is expected to achieve opti- mum display device status for personal/mobile equipment in the broadband age.

Looks like bog-standard TFT construction to me. It probably isn't used much because CoG gives higher yields (a flawed glass or chip can be replaced before assembly versus the entire display being useless).

Not the answer you're looking for? Browse other questions tagged integrated-circuit lcd identification display or ask your own question.

5
Name and reason for space between pixels on an LCD display
2
Identifying and finding replacement for LCD display module
2
What type of LCD backlight does this screen have?
1
Help identifying this LCD module
13
What is this type of flexible contact strip called?
4
Significance of bias when driving an LCD
0
identify a 128x64 LCD display
0
what kind of display technology is this?
2
Why does this part of an OLED filter light only when orientated correctly?